Patents didn't save Motorola. The Moto X smartphone didn't save Motorola. Under Google, the company was an absolute money pit. And yet, Lenovo CEO Yang Yuanqing believes he can turn Motorola's fortunes around within a matter of months, not years. "In a few quarters we can turn around the business," he told Bloomberg, in an interview following the company's Q3 earnings announcement.

There, he was even more bullish: "I am confident that from day 1 after closing, these businesses will quickly begin contributing to our performance and develop into pillars for long-term, sustainable growth," he said, according to the earnings release. How will Lenovo turn Motorola into a profitable division, though? The company has a plan: 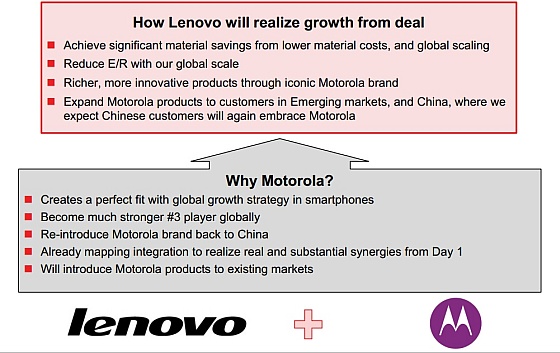 Of particular interest is that Lenovo plans to relaunch the Motorola brand in China and emerging markets, where it will add entry-level Motorola phones to its arsenal. That doesn't necessarily mean that Lenovo will abandon Motorola's existing plans for the developed world, as Yuanqing tells Bloomberg that the company will still "compete in the premium market," but as you can see in the picture above it's just one bullet point in Lenovo's global strategy going forward.

While the company expects its recent, massive purchases of Motorola and IBM servers to negatively affect the bottom line in the months to come, for now Lenovo's third-quarter financials look solid. The company reported record quarterly revenue of $10.8 billion, a 15 percent increase year over year, and a 30 percent increase in net profit to $265 million. For three straight quarters, Lenovo boasts, it's remained the world's largest PC vendor, even though its smartphones and tablets are continuing to sell even better than its traditional computers.

Update: Lenovo offered some lengthier answers to the question of how to turn Motorola around at The Wall Street Journal.