Apple has released its eighth annual Supplier Responsibility Progress Report. The report outlines the company's successes in giving more than a million people in its supply chain "safe and ethical working conditions," and details Apple's plans for the ethical sourcing of minerals.

The report also addressed the issue of intern labor. In October 2013, it was reported that Apple supplier Foxconn pressured thousands of interns from China's Xi'an Institute of Technology to work overtime on the assembly line for Sony's PlayStation 4. Apple partnered with Stanford University's Rural Education Action Program in 2013, and both parties will join to evaluate the "education and internship performance" from 2013 to 2014 of over 12,000 students from more than 130 schools. Suppliers must also "ensure that the educational program matches the student's educational goals" when hiring interns, and working hours must not conflict with school attendance. 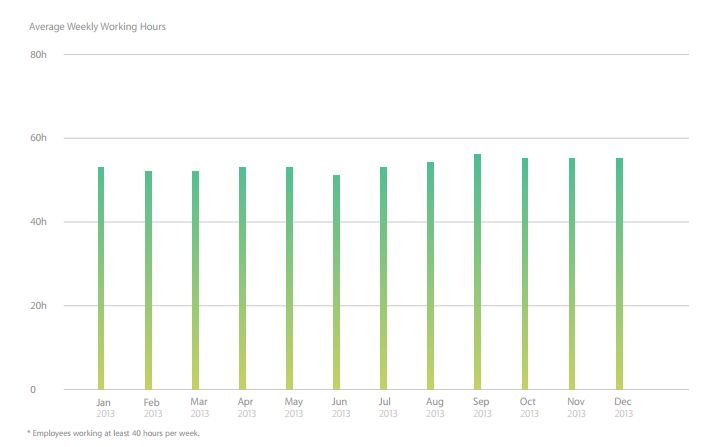 In addition to student and underage working laws, Apple has pushed to enforce a maximum 60-hour work week for adult employees. The company claims that it has an average of 95 percent compliance with this limit across its suppliers. The average work week for the more than one million people tracked in Apple's supply chain was less than 50 hours. More than 97 percent of work weeks apparently met Apple's requirement of one day of rest per every seven days. The report classifies long hours as "a persistent problem for the electronics industry," but also says that a limit of a 60-hour work week should be maintained "except in unusual circumstances." Overtime, when it is required, must be "absolutely voluntary."

But this year's report also widens its focus from human working conditions to address the environmental and political impact of Apple's manufacturing process. The company increased the number of its focused environmental assessments from the previous year, performing 62 detailed studies of environmental risks discovered during 520 site profile surveys. The number of environmental core violations — "serious breaches of compliance" — rose sharply from last year, from four to 17.

Environmental guidelines were made more stringent

The rise is startling, but a number of factors make direct comparison year-on-year impossible. Apple conducted 51 percent more audits than the previous year: 451 facilities, of which 40 percent were new to the supply chain. The company also strengthened its guidelines for what it considers a core violation. The designation now include things previously thought less serious, such as discharging process wastewater without treatment into sewers or the surrounding environment, and disposing of hazardous waste at a non-regulated facility. 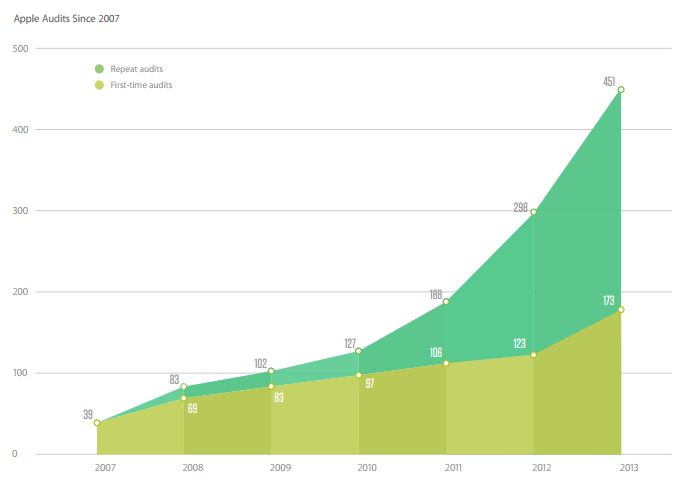 Continuing its focus on the environmental impact of the manufacturing process, the report introduces Apple's Clean Water Program, a pilot scheme the company has launched with 13 "water-intensive" suppliers that consume more than 41 million cubic meters of water per year. The sites are subject to a full analysis of their water usage, but Apple doesn't clarify quite what it will do to save water, instead saying it will give the supplier "specific remediation actions" depending on its "improvement needs."

The report shows Apple has also considered the impact on the human and political environment in the areas in which it takes primary resources. The company was able to confirm last month that all of its active and identified tantalum vendors were verified as conflict-free by third-party auditors. Tantalum, a metal used in the construction of some electronics, can be found in mines in the Democratic Republic of Congo that have reportedly funded wars in central Africa. Apple also released a list of tin, tantalum, and gold smelters and refiners that showed which have been independently verified as conflict-free, joining other electronics companies in a push to rid their products of conflict materials.