But will it pass muster with the regulators?

Comcast has just made official the agreement rumored last night: it is acquiring Time Warner Cable in a multibillion-dollar deal. Officially presented as a merger between the two US cable giants, the agreement will see Comcast absorbing 100 percent of TWC in a $45.2 billion all-stock transaction. As a result, current Time Warner Cable shareholders will find themselves owning roughly 23 percent of Comcast's common stock.

Monopoly concerns immediately rise to the fore with a merger of this scale, which Comcast will try to allay by making divestitures. It's acquiring TWC's 11 million managed subscribers, but says it's prepared to divest systems that serve roughly 3 million, netting it 8 million from the deal and an overall total of 30 million managed subscribers. The company says that will keep it below a 30 percent share of the US market.

"We believe that this transaction is approvable."

In among general promises of "a superior video experience, higher broadband speeds, and the fastest in-home Wi-Fi" for consumers, the press release also puts a figure on the operational cost savings this merger is expected to produce: $1.5 billion. Comcast Cable CEO Neil Smit will become President and CEO of the new cable company.

While the two companies have agreed to the terms of the merger, it still requires approval from shareholders and, most crucially, US regulators. Should both those groups find it acceptable, the deal is expected to be completed by the end of 2014.

Update: On a conference call discussing the merger, Comcast Corporation CEO Brian Roberts downplayed the regulatory hurdles the deal faces. "We believe that this transaction is approvable," Roberts said. "It is pro-consumer, pro-competitive, and strongly in the public interest." Because Comcast and Time Warner Cable do not currently operate in any of the same markets, Roberts suggests that competition will in no way be hampered. "Comcast and Time Warner Cable do not compete in a single zip code in America," Comcast executive VP David Cohen elaborated. 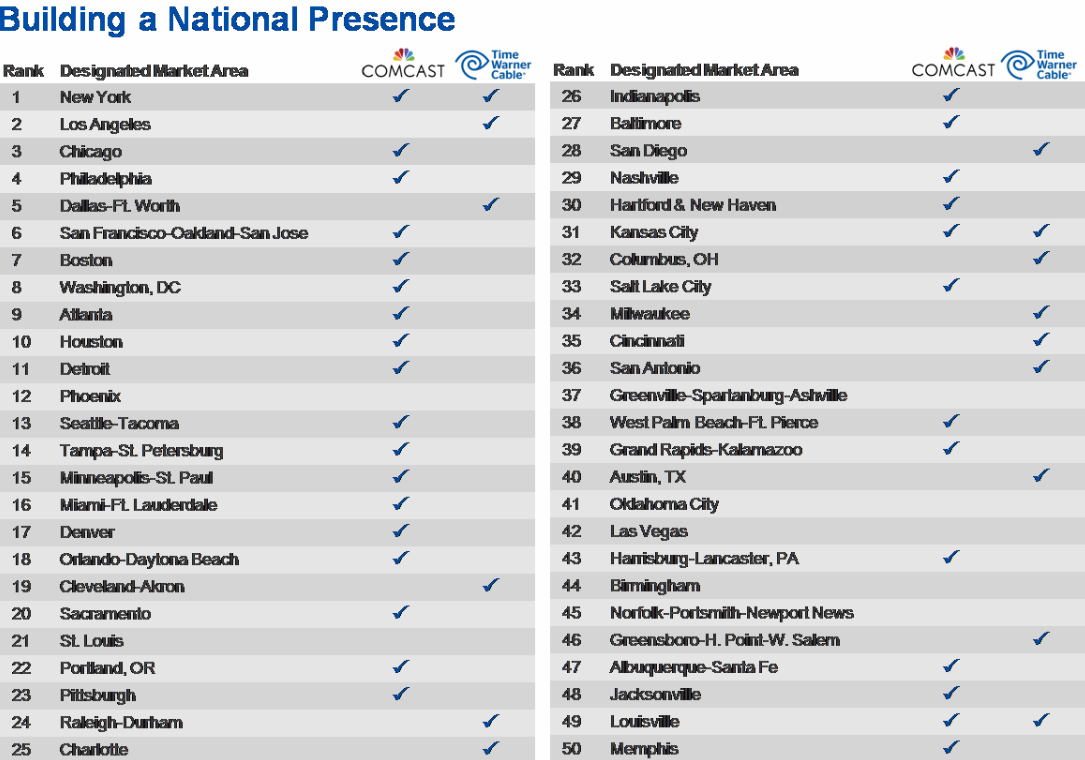 After the merger, Comcast would have a presence in 43 of the top 50 national markets.

Because regulators are familiar with cable industry consolidation, Cohen and Roberts believe that this won't be a particularly complicated deal for them to review. "It's going to get a careful review … but it's not going to have a more stringent review than prior transactions that this company has done," Cohen said. They would like to close the deal within the year, and see 9 to 12 months as a likely timeframe. There is no breakup fee between the parties should the deal not go through.

Comcast also said that the deal would be beneficial to net neutrality. Select requirements of Comcast's NBCUniversal purchase would ultimately apply to Time Warner Cable under this new transaction, including requirements that it adhere to the FCC's Open Internet protections — despite them being struck down in court. "The FCC's Open Internet order ... will continue to be binding not only in the Comcast territories but now in the Time Warner Cable footprint as well," Cohen said. While the Open Internet order is dead for most of the country, a successful merger would have protections binding on both Comcast and TWC — at least until they expire in 2018.

Asked to speak to whether Comcast would consider extending those terms, Roberts declined to say. "How long that goes is not something I want to speculate on today, but it's many years at the very minimum," he said. At the least, he feels Comcast and Time Warner Cable being subject to those conditions for any matter of years is better than the new status quo, which has no net neutrality protections that other internet providers must adhere to.