Verizon Wireless today announced new wireless rate plans that provide more data and lower prices, provided customers are willing to sign up for Verizon's early smartphone upgrade services. The More Everything plans, which leaked to the internet yesterday, are similar to the company's existing Share Everything plans, but with higher allotments of data. More Everything plans are replacing Share Everything in Verizon's options. Verizon says that some customers will see their data allotments doubled for the same price that they are paying now, though that will only apply to the lowest 500MB and 1GB plans (the 2GB plan will increase to 3GB for the same cost).

In addition to the lower data rates, More Everything plans give Verizon users up to 25GB of cloud storage service from Verizon at no additional charge, as well as unlimited international messaging (the Share Everything plans already include unlimited standard text, picture, and video messaging and unlimited talk minutes). Verizon is also offering its International Long Distance Value Plan, which offers $0.01/min calls to Canada and Mexico and $0.05/min calls to other countries, for free for three months. Customers that are on Verizon's current Share Everything plans will automatically get the new benefits and lower data rates starting today. 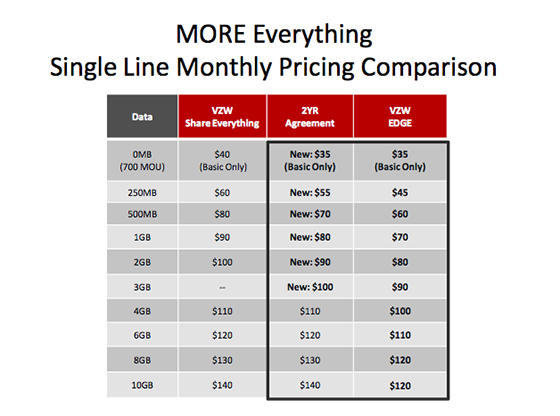 Perhaps the most interesting part of the new plans is what Verizon is offering to customers that sign up for its Edge early upgrade program. Customers that do so will see $10 knocked off of the cost of their plans up to 8GB, and $20 off data plans with 10GB and higher. This applies to each line in a group that signs up for the Edge program. Verizon still isn't giving a discount to customers that are out of contract or paid full price for their device, so it's not quite as friendly as the recent plans introduced by T-Mobile, Sprint, or even AT&T.

T-Mobile's aggressive strategy of eliminating cell phone contracts and making terms more friendly to consumers is certainly having an impact on the industry as a whole, but Verizon is the carrier that's resisting the change the most. Today's new plans are a step forward, but Verizon is still the most expensive carrier in the country. That might not be a problem for it, however, as last quarter it announced 1.7 million new customers joined the fold, a far greater number of additions than AT&T or Sprint had for the same time period (T-Mobile has yet to report its fourth quarter earnings).