A very dark cloud with a tiny silver lining

Share All sharing options for: Why you should be scared of Comcast and Time Warner Cable merging

After rumors broke late last night, Comcast announced this morning that it had reached an agreement to acquire rival Time Warner Cable in a deal worth around $45 billion. The news brings months of machinations to a close: Comcast ended up besting the efforts of the much smaller Charter Communications, which had been trying to advance its own hostile takeover of Time Warner as recently as yesterday.

But with the prospect of a combined Comcast and Time Warner on the horizon, the question turns to what a merger would actually mean — both for consumers and the industry at large. If the move is approved by federal regulators, it could cement the kind of monolithic monopolies that have plagued cable subscribers all along, raising concerns over net neutrality and competition in the marketplace. Despite the very real potential for a media dystopia, however, there could be a silver lining: the chance that the deal could help break down a wall that’s kept innovation out of the living room for years.

It would turn the behemoth into a titan

Comcast is already the largest cable and internet provider in the United States, with 21.7 million television and 20.6 million broadband subscribers to its name. Time Warner Cable is the second-place cable service, but it’s a distant second — with 11.2 million TV and 11.1 million internet customers. Comcast will shed around 3 million of its own subscribers, thereby keeping the company’s combined television market share under 30 percent in a bid to appease regulators. Even so, with the addition of Time Warner Cable, an emboldened Comcast will suddenly have a presence in every major media market in the United States, stretching from Los Angeles to New York City.

It would turn the behemoth into a titan, expanding Comcast’s reach and power in unprecedented ways. Tie in the fact that Comcast also owns NBCUniversal — which means it has a movie studio as well as broadcast and cable networks of its own — and you’re looking at a vertically integrated media juggernaut. One that wouldn’t just be in control of our televisions, but would be ready to steer the direction of any future online services as well.

It’s a prospect that already has voices speaking out. Last night Free Press and Public Knowledge both issued statements condemning the prospect of the merger, calling on federal regulators to reject the deal. "An enlarged Comcast would be the bully in the schoolyard," wrote Public Knowledge’s John Bergmayer, "able to dictate terms to content creators, internet companies, other communications networks that must interconnect with it, and distributors who must access its content."

"An enlarged Comcast would be the bully in the schoolyard."

There’s little doubt that the FCC and Department of Justice will take a close look at the implications of the deal, but at this point exactly what FCC Chairman Tom Wheeler's stance will be is unclear. The DOJ and FCC were reportedly unenthused at the prospect of T-Mobile and Sprint joining forces — to the apparent surprise of both companies — arguing that the wireless industry needed more competition to benefit consumers, not less. Those concerns are harder to apply to this potential buyout — Comcast and Time Warner technically don’t compete directly thanks to regional monopolies.

Naturally, Comcast itself thinks the deal won't spook regulators too much. "We believe that this transaction is approvable," said Comcast CEO Brian Roberts on a conference call today.

On the subject of net neutrality, Wheeler’s been vague at times. He’s embraced the rhetoric of an open, unregulated internet — a position that seems much more in line with his background as a cable and wireless-industry lobbyist — while also noting that when the pendulum swings away from the consumer’s best interests, he won’t hesitate to regulate. If anything, the Comcast and Time Warner deal will give Wheeler perhaps the first massive opportunity to make a defining statement about the guiding principles the FCC will embrace under his tenure.

At the very least, Comcast is under seven years of self-imposed net neutrality terms thanks to a deal it reached when it merged with NBC (the terms end in January of 2018). Comcast said today that those rules would still apply to the larger company if the buyout is approved.

Will the FCC allow the buyout to happen?

For consumers, there are numerous concerns. Comcast is already a regular subject of suspicion when it comes to throttling internet speeds — it currently sits in the bottom four in Netflix’s monthly ISP speed index — and the company hasn’t been shy about giving preferential data-cap treatment to its own video apps. In theory marketplace competition should already be addressing some of these concerns, but as anyone that’s moved recently will tell you, there’s already precious little overlap between cable providers as it is. Some geographic regions have just a single provider, while others have an incumbent and a disadvantaged challenger that lacks the incumbent’s ability to spend endlessly on infrastructure improvement and content deals. Satellite providers like DirecTV aren’t a viable alternative for fast internet service, and most of the country doesn’t have access to next-generation services like Verizon’s FiOS, which even Verizon itself has said it doesn’t care to expand beyond its current market area. 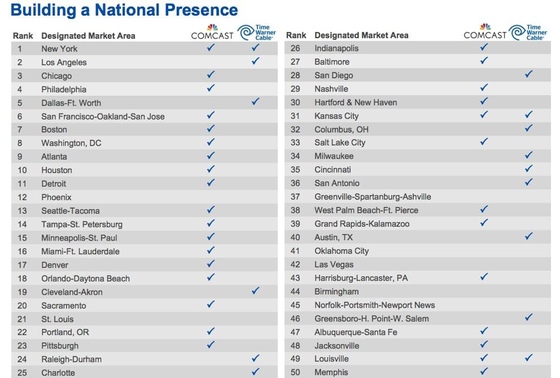 Realistically, there’s no way to avoid it: approving Comcast’s purchase of Time Warner Cable would essentially rip away the already perishingly tiny hope of new competition ever emerging in the cable landscape, taking what’s been a constant frustration for consumers and cementing it into a permanent state of affairs.

While the deal would turn cable into a competition dead zone, there’s actually a chance an even more monolithic Comcast could offer some benefits to customers. As broadband speeds have taken off and customers have seen the internet as a viable delivery mechanism for media, there’s been a growing cry for over-the-top video and enhanced integration with our current crop of devices. We’ve seen it succeed in dribs and drabs — HBO Go on the Apple TV here, some light Xfinity integration with the Xbox there — but there hasn’t been a true, all-encompassing solution. The bitter, brutal world of content negotiation has prevented it from moving faster.

Intel tried in vain to negotiate deals for its own internet-based TV service before finally giving up, and according to folklore Apple’s been trying to secure broader content deals for years. Studios and networks aren’t willing to undermine their traditional business models, so the fallback option has become working with cable and satellite providers instead. But selling a next-generation integrated TV experience only really flies if it’s available to everyone; it’s hard to frame a feature as a game changer when it may work in your house, but not your cousin’s in the next state over. So instead we’ve seen halfway measures like the Xbox One’s HDMI passthrough — solutions that don’t require providers to be on board.

A cable company with true nationwide reach could cut the kind of deal that would change that, providing enough subscribers to make a next-generation TV product viable and create enough market pressure to bring its competitors to the table and sign on to similar arrangements. It’s the kind of deal that could turn a new Apple TV into a set-top box that would let you watch live television — and one that Cupertino has reportedly been working on with Time Warner Cable already.

With Comcast and Time Warner Cable both losing video subscribers this past year — while broadband subscribers ticked up — there’s real incentive for the new Comcast to use hardware from the likes of an Apple or Microsoft to bring new subscribers on board. Of course, the odds are just as high that we’ll see the debilitating effects of a media conglomerate run amok, mercilessly crushing any sense of fairness and competition. But one thing’s for certain: in the end, it’s going to be all about the money.