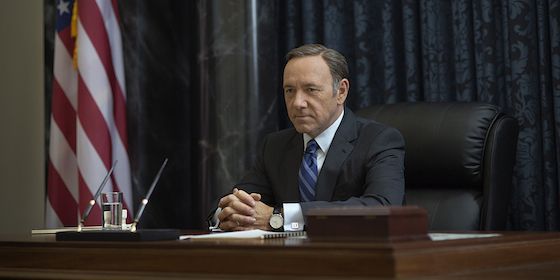 And now for some wild Season 2 predictions that everyone can laugh at me for later.

0 hours, 0 minutes into the marathon

Final thoughts: If the season one premiere was about establishing Frank first and foremost, this episode has a much stronger feel of ensemble. Lucas and Rachel are getting more screen time - and possibly a weird, Stockholm syndrome kind of love interest.

And let's talk about "that scene." Whereas the Peter Russo murder seemed out of place at the time, the second time around makes a lot more sense. As Bryan Bishop just said to me, Netflix has marketed this brilliantly. Starting again at 3:55AM ET.

Final thoughts: Netflix knows you'll be devoting your time to watching multiple episodes, so like last season, you can probably expect some to be slower, with more exposition and character development. If the season premiere was about tying up loose ends, Chapter 15 continues to show the fallout and set up the ongoing plots of this season. (Is the Gillian Cole story just... done?)

It looks like Peter Russo's case is being put to rest — at least temporarily — while Zoe's is being put front and center. Lucas is now a main cast member, as is newcomer Jackie. The future majority whip has been introduced rather abruptly and roughly, and she seems to be getting established as a hybrid of Frank and Claire. She's aggressive and career minded but she does have moments where tries to justify her actions on some moral high ground (e.g. the illegitimate daughter).

Another major storyline being established: as Jackie becomes "new Frank," Frank has his eyes set on the power that Raymond Tusk wields. Frank doesn't seem entirely happy with all the new surveillance in his life — the sacrifices to privacy he must make as VP. But hey, if Frank was comfortable in his position, season two would get very boring.

Final thoughts: I get the feeling I'll be writing less here as the storylines get fully established during the middle chunk of these episodes. Lucas now has an ally in a brand new character. Doug gets uglier as Rachel Posner's raison d'être to the show is... well... is completely unclear. Claire is still waiting in the wings. Remy is nowhere to be seen. I still really, really want to know where Freddy's dark side is going to go.

The bill came and went in just one episode's time, and the contents of the bill really didn't matter. It was a show of power for Frank, and more importantly, a small victory over Raymond Tusk as they struggle to be the president's puppet master. 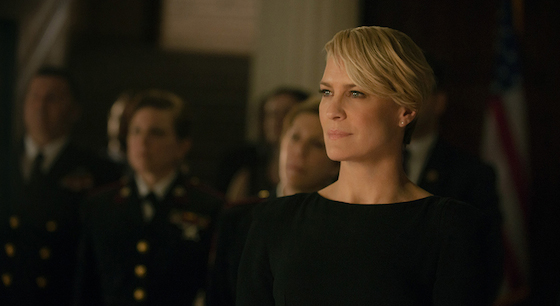 Final thoughts: The first season had a few throwaway episodes — ones that took a few minutes of development and made a whole episode out of it. This was somewhat similar. Frank and Jackie's styles were put in sharp contrast, and it remains to be seen if Jackie's moral high ground trumps Frank's notorious deception for Donald Blythe's vote. (I'm guessing it will.) I can't say the Lucas-and-hacker turn is all that surprising.

The big turn here was cementing Claire's story for this season — the allegations of rape against General Dalton McGinnis. It's another great moment for Robin Wright — and for her and Kevin Spacey, a great ending to the episode. That all being said, a majority of this episode still feels like filler.

I can see light out my window. Sunrise in about 10 minutes. Maybe this wasn't such a good idea, after all. Whatever, I still have three Red Bulls.

Final thoughts: Season two has been trying to show it can juggle multiple plot lines in a way that's akin to other big-name dramas. But House of Cards was established firmly around the Underwoods — Frank, mostly, and then Claire. Lucas never feels right simply standing in the shadow of Zoe, and it's almost sad to watch him along the inevitable path we see here. Once more with feeling: poor Lucas!

Frank's main adversary remains Raymond Tusk — more solidified now that he took a hit on his own relationship with the president to tarnish Tusk's. A few episodes back, Frank talked about proximity to the president — a callback to the series premiere. But is Frank's ultimate goal to control the president or to be the president? Now or in the next election? What is the end goal?

Does anyone remember Peter Russo? No? Okay.

Final thoughts: I said it above but it's worth repeating: absent the fourth wall, Frank Underwood is his most honest with and around Raymond Tusk. Arguably more so than with Doug Stamper, who helps him scheme but doesn't match wits with him. That isn't an entirely truthful Frank, but it's one whose ambitions are clear.

As for Doug, we've seen moments of him address his past and his moments of humanity — not the "errand boy," as it was noted by Mr. Feng. He's persistently worried by temptation, be it an Old Fashioned or the ex-prostitute link to heinous crimes committed by both him and Frank. 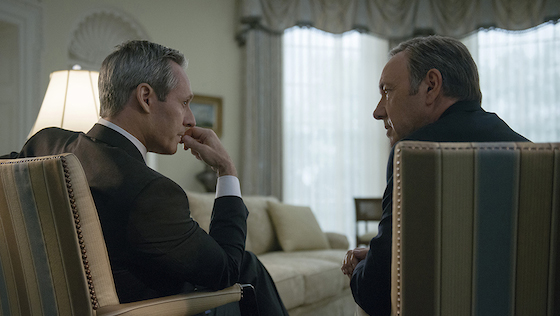 5 hours, 35 minutes into the marathon

Final thoughts: Time and time again, House of Cards portrays the president as a pawn. Or maybe more apt, the king piece in Chess — he's important because he's the top, but he can really only move one spot at a time and has to be submissive by nature of his importance. I still can't tell if Frank Underwood wants the position for himself, thinking he could do better, or if he merely wants to be on the sidelines but controlling things. It's not something he can really think about now, though — he's laser-focused on cutting off Raymond Tusk from the legs, who has turned into the Ted Turner arch villain.

The B plots seem to be falling the wayside or shifting entirely. The Lucas plot could realistically end now. Rachel Posner could get interesting — but mostly it's a reflection of Doug Stamper, whose character is getting fleshed out so much that I'm worried he's being set up for a big sendoff in the show. Surely some dramatic change. And Seth Grayson? Who knows who he'll quadruple-cross next. Christina is nothing more than eye candy — a significant downgrade from last season. More Freddy, please.

By the way, the drinking game should've been "for every Civil War reference."

Fourth wall moments: just one that I recall. Destroyed furniture: something something Civil War table. Red Bulls consumed: just two. Fuck it, I'm having half that Butterfinger. At 9:30 in the morning.

This is the halfway point!

6 hours, 36 minutes, 2 Red Bulls, and half a Butterfinger into the marathon

Final thoughts:Remy and Jackie. Rachel and Lisa. Garrett and Patricia Walker... Garrett and Raymond. This episode is all about couples. Not necessarily relationships, but there's a common theme stretched across numerous pairings in this episode. It's about mending, or breaking, bonds. So it's only natural that the cliffhanger at the end was one such relationship — exposed because of the damage to another, with the final call being made by Tusk's spouse. Pairs all around.

While we have a moment... does anyone remember Peter Russo? Christina? Lucas? Hammerschmidt? Janine? Zoe?

7 hours, 29 minutes into the marathon

Final thoughts: This might be a good time to bring up that a third season of House of Cards has already been ordered because there's a strong chance this one's gonna end on a messy note. The second season so far has been a very personal season for the Underwoods, even as secondary plots threaten to distract and derail the main arc. As evil and manipulative as we've seen Frank — and indeed, we've seen a number of people who take a more noble route — what compassionate he does have separates the man from his rival, Raymond Tusk. There's no question after this episode, Frank is an antihero by comparison.

Five monologues to the camera. I haven't moved my foot in at least two hours. Good morning, west coast! 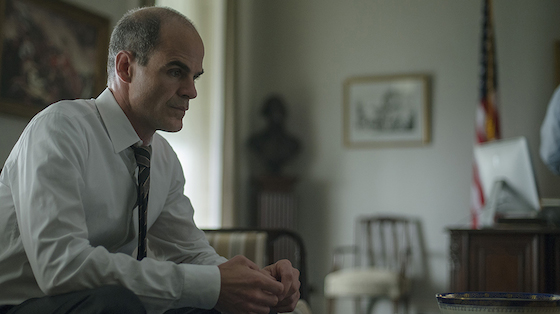 Final thoughts: You know, I thought summing up my thoughts would be smart — collecting all the notes and looking for a bigger picture, a common thread over the last 48 to 52 minutes. I hate myself for that, really I do. I have nothing else to add than what I've already said. This episode feels like the build up to the third Act of what is probably the second Act (i.e. season two) of a larger arc. So it's a sub-act. Anyway... it feels like we're setting up the last pieces of this season's plot before they all start falling. 3 more episodes to go. I think 3 fourth-wall monologues this time? But really some of the best. To repeat the line: "It's not beginning the story that I fear. It's not knowing how it will end. Everyone is fair game now, including me."

Okay, break's over. Time for the last run.

Final thoughts: I got none. On to the last two! We can do this!

Final thoughts: let's just do this. ONTO THE SEASON FINALE.

Final thoughts: So where does Frank go from here? He's got the highest authority in the land. Will he try to take over Canada? Is there a galactic court? Will he get bored and tear down Congress for a roller skating rink? And what about every other plot point. Rachel Posner? Potentially a subject for next year, but if it's anything like Peter Russo or Zoe Barnes, it won't have a material impact — just loose ends to somewhat wrap up as they find a new story.

So that's it! It took me 12 hours, 21 minutes. If you really want to, though, it's definitely possible to finish under 12 hours. I'll clean up the liveblog later, maybe into something more like a compendium. For now? A quick nap. Thanks for reading this far!