The most iconic drum machine in history looks good for its age. Japanese electronics company Roland released the TR-808 Rhythm Composer in 1980, and for a long time people thought the only way to make dance music was with this Halloween-colored box. The noises that came from the analog circuitry inside — particularly the big, round bass drum — made people go insane on the dancefloor. And they still do: the 808 is at the core of new songs from Beyoncé (“Drunk in Love”) and Daft Punk (“Doin’ It Right”), just to name a few.

But Roland stopped making the 808 in the mid-80s. You can buy one on eBay now for around three grand (and maybe another grand to bring it into good working condition), or use one of the thousands of hardware or software imitators available online or at Guitar Center. Most of them do a decent job recreating the functionality of the original, but they’ve all just been humble odes to a classic — until now.

Today, Roland is announcing the TR-8 Rhythm Performer, the first true spiritual successor to the TR-808. It’s the head of a family of four devices called AIRA that also includes the TB-3 Touch Bassline, the VT-3 Vocal Transformer, and the System-1 Plug-Out Synthesizer. The TR-8 feels like the real thing because it is the real thing. As an all-digital affair, it’s very deliberately not a re-issue: instead, Roland developed a new digital modeling paradigm called Analog Circuit Behavior to faithfully recreate the big sounds of transistors and diodes that made the TR-808 so famous. As a lifelong drum machine addict I can tell you this is not some marketing BS — Roland actually assigned an engineer to work full-time on just the bass drum sound, A/B testing the digital version against the original until the two were functionally and audibly indistinguishable. The TR-8’s kick is the sound that subwoofers were invented for, and anyone who has a problem with it is probably trying too hard.

But the kick was only a small part of the reason the TR-808 became an icon. The funnest and most awesome part of using an old 808 is how simple it is to create loops with a 16-step sequencer, which allows the user to create a 16-beat loop — a form factor it pioneered. The TR-8 doesn’t just sound like a champ: it’s got this visceral, tactile experience with all the straightforwardness and get-shit-done mentality of its ancestor, but with a big ol’ truckload of intuitive new control features that make it really fun to make music on. Every sound now has dedicated decay and tuning knobs, each sequenced step has programmable delay and reverb, and you can even sidechain audio from external sources to create that "pumping and breathing" sound that defines nearly ever David Guetta song. These digital conveniences are all rolled seamlessly into the time-tested interface, but the flashiest addition to the face of the box is the scatter wheel. It’s a brazenly glitchy re-trigger effect that feels distinctly 21st-century — like the chopped-up vocals of Skrillex’s "Bangarang." 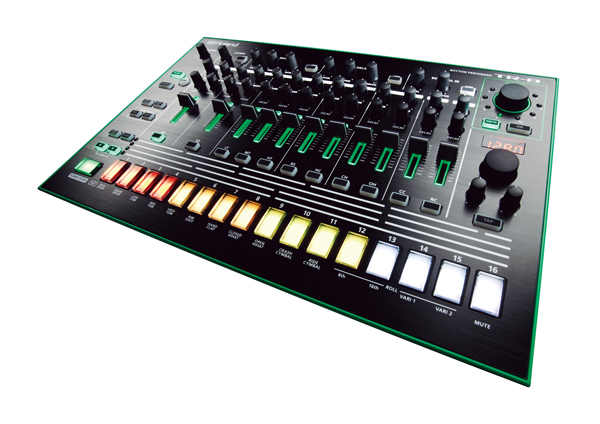 The sixteen step buttons now light up in a variety of informational colors (including those famously-80’s Halloween hues of the 808), and there’s a three-character LCD display above the "Tempo" knob. There are loads more drum sounds to be heard here than there were on the 808 — from 909s to 707s, other well-known Roland machines, and everything else in the world of synthesized percussion — but not much else has changed. Roland’s biggest triumph here is keeping everything refreshingly musical: every function in the box fits perfectly under ten fingers, immaculately programmable and super-intuitive. Not a bad deal for $499.

On the business end of the TR-8, things have changed a lot: instead of individual audio outputs for each percussion sound, there are two assignable outs and a USB port for sending audio information to a multitrack digital workstation. There’s a stereo input pair that allows the TR-8 to act as a small mixer, and instead of the ancient DIN instrument synchronization port, there are (only slightly-less ancient) MIDI ports. Now, if you’ve archived your MIDI cables along with your parallel and VGA connectors, you’ll want to dust them off now… because the TR-8 didn’t come to this party alone. 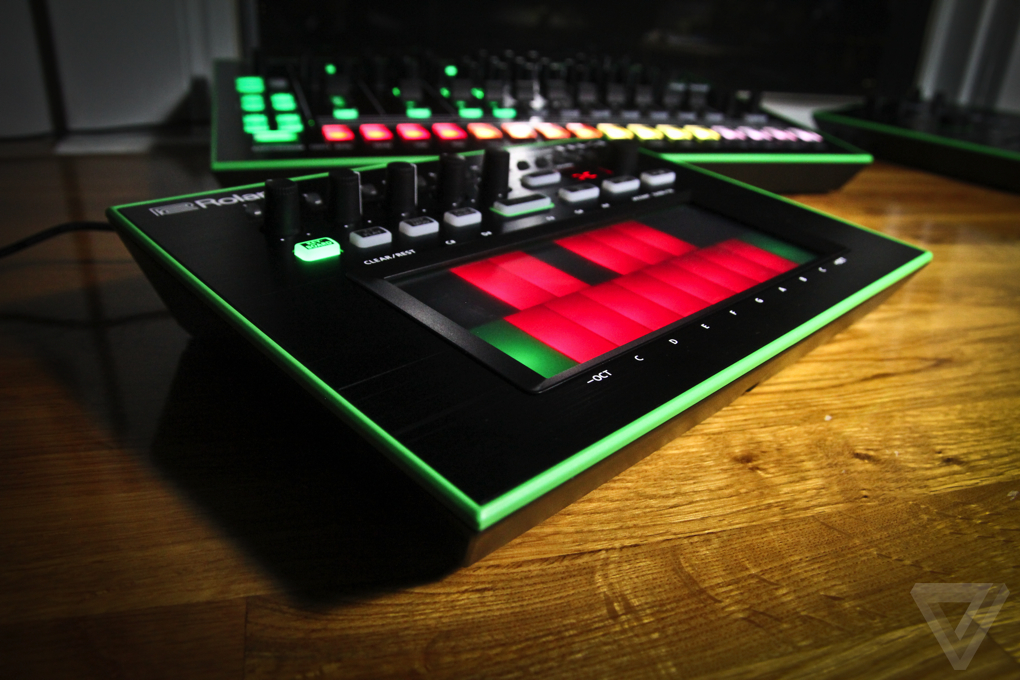 Just as the TR-808 was meant to replace a human drummer, Roland’s TB-303 Bass Line sequencer from 1982 was meant to replace, you know, a bassist. But while the 808 always sounded like percussion, the 303 never sounded like a four-stringed instrument — it spit out a completely alien vocabulary of squelches, slides, and analog flatulence that early dance producers soon co-opted for their own devious amusement. They called the product Acid House — and while it never spent much time in the pop spotlight, it remains the most sonically distinctive genre of music ever created. The ingredients are simple: a TB-303 synced to an 808, 606, or 909 drum machine, or a very close imitation of that pair. Predictably, like 808s, original 303s can also fetch around three grand on eBay. Not-so-predictably, Roland is releasing an evolved 303 as the second member of the AIRA family: the TB-3 Touch Bassline.

Unlike the evolutionary design from TR-808 to TR-8, the TB-3 bears almost no physical resemblance to its spiritual predecessor — and that’s probably a good thing. The original Bass Line was a messy (but lovable) hybrid between a sequencer and a keyboard, but it was a pretty shitty sequencer and flat-out miserable as a keyboard. So Acid House producers mostly mashed buttons and turned knobs at random until they got something good — it’s an ethos that’s reflected perfectly in the TB-3’s Kaoss Pad-like touch interface. It’s still a shitty keyboard, but that’s kind of exactly the point — it’s way more fun to bang in notes at random and turn the signature cutoff, resonance, and accent knobs than it is to sit down and try to do some sort of deliberate composition with the thing. 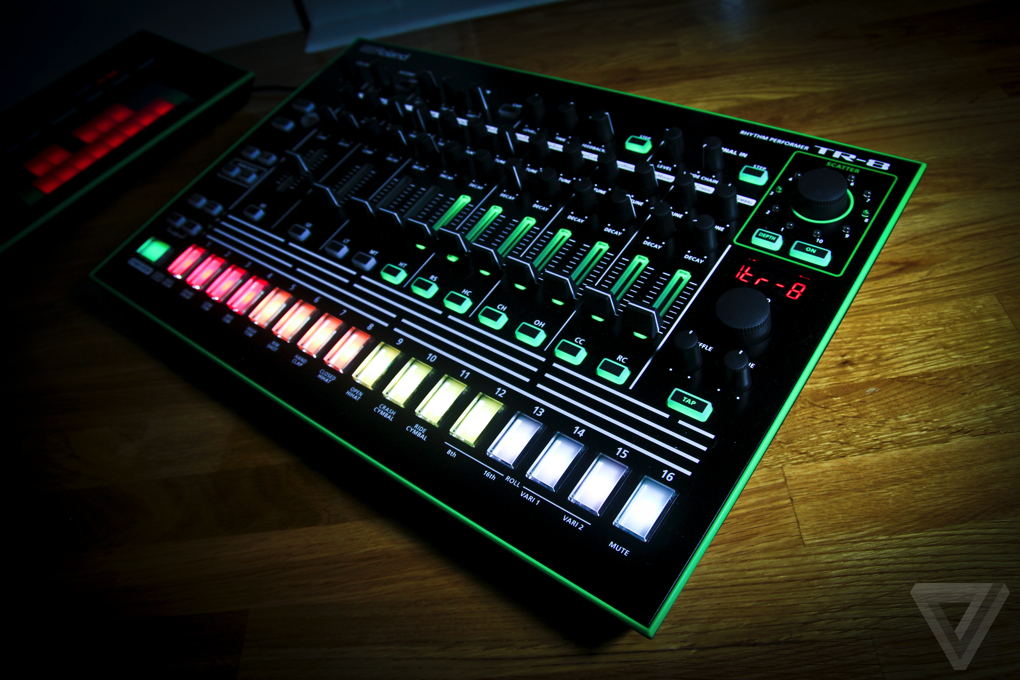 There are 26 Analog Circuit Behavior-based sound sets that model the true functionality of the original analog 303, including many that are distinct nods to the huge hacking community that’s developed around the box — most recognizably the Australian Devil Fish mod. But there are also three extra banks of sounds that are decidedly un-303. That makes it easy to harness the peculiar sequencing characteristics of the Bass Line, but without using actual bass sounds — think sharp synth leads and smoothly-bubbling ambient pads. Note, accent, and glide randomize functions are baked in too, so the machine can do the button-mashing for you — and of course, you can use the touch display to do Kaoss Pad-esque filter and envelope sweeps.

For an electronic music junkie, there’s nothing closer to nirvana than the $299 TB-3 slaved to a TR-8. They are the peanut butter and jelly of production, and using them together elicits the kind of childish bliss that’s usually reserved for playgrounds and petting zoos. 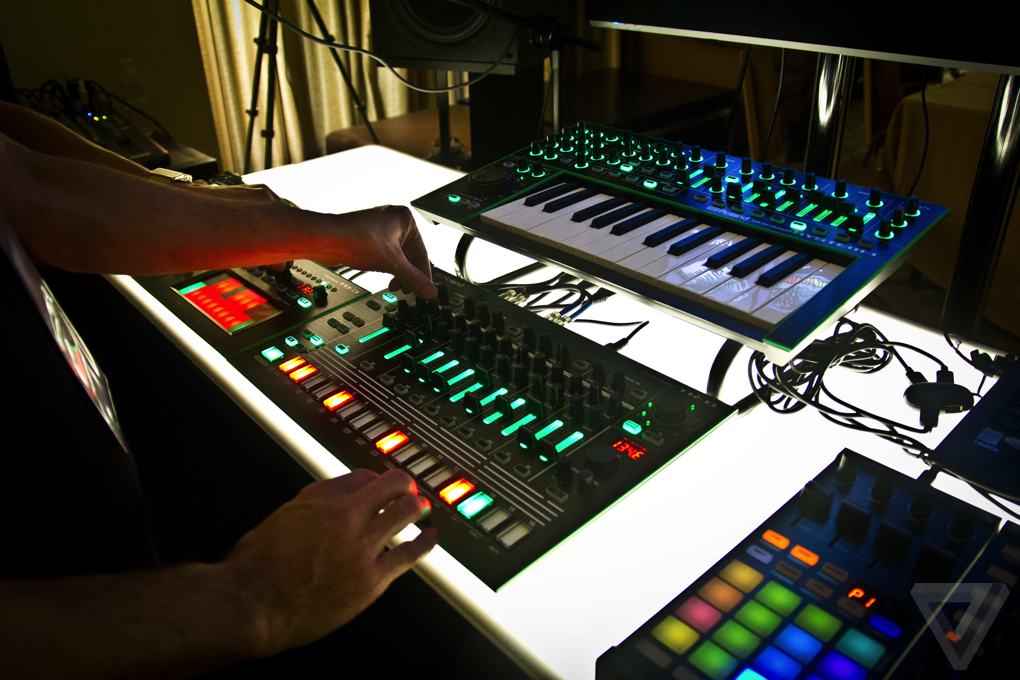 The family that raves together

While the TR-8 and the TB-3 are the obvious heads of the AIRA household, the virtual-analog System-1 synth ($599, shipping this summer) and VT-3 vocal effects box ($199, shipping in April) round out this nuclear family in a way that feels downright wholesome. There’s something that just clicks when you have all four members on the same table in front of you: it’s the four elements of modern electronic music performance in hardware form, which is something you don’t see very often without a laptop also in tow. They’re all cut from the same unapologetically futuristic cloth: black brushed-metal faces with Tron-esque green edging and sloped-in sides that give the whole kit a thickness and presence that you’d never see in a laptop. Well, maybe you’d see it in an Alienware joint, but that’s not such a bad look for a drum machine, it turns out. Seeing them blink and step in unison is simultaneously comforting and exhilarating: "Come with us," they seem to whisper in unison, "to a place where the fog machines never run out of juice." They’re your little buddies — and most importantly, you can’t do spreadsheets or check Friendster or watch porn on them. All you can do is rock.

Rocking out — and appealing to beginners — are two facets of electronic music production that are becoming rare in an increasingly-Ableton’d world. Die-hard Roland fetishists will likely be sated by the sound universe that the company has recreated with Analog Circuit Behavior. That’s a huge triumph in itself — now there’s essentially no legitimate reason to continue spending money on the legacy hardware except for museum-grade nostalgia, which is something that most serious aspiring producers can’t afford to indulge in.

And in any case, Roland knows that those heavy tweakers aren’t going to help them grow their future audience. With AIRA, Roland has built a contemporary hardware composition platform that’s as easy to enjoy as an electric guitar. The drum machine giant knows it really only needs to manufacture one thing to turn on an entire new generation of drum machine addicts: fun.