‘RoboCop’ director José Padilha: 'the automation of violence opens the door for fascism'

‘RoboCop’ director José Padilha: 'the automation of violence opens the door for fascism'

The 1987 sci-fi classic RoboCop was a film uniquely of its time. Almost everything that made it compelling — its aggressive gore, wild satire of corporate ethos, and the stylistic excesses of director Paul Verhoeven — would have a hard time playing with modern audiences, yet that wasn’t enough to deter Oxford-educated filmmaker José Padilha from taking on the challenge of a remake.

To solve the problem, the director of the Elite Squad series decided to make a film that was uniquely suited for our time, addressing emerging questions about the ethics of drone warfare and the differences between man and machine. We spoke to Padilha about the challenge of taking on a classic, and how he brought his version to the big screen.

The original is such a venerated classic. How daunting was the challenge of reimagining RoboCop, and what was the most important thing you knew you had to accomplish to quell audience skepticism?

There is a reason why the first movie is a classic, and the reason is it’s a great movie, meaning it’s a great character construction. The character that [director Paul] Verhoeven and [screenwriter] Ed Neumeier came up with embodies the idea that the automation of violence opens the door for fascism. And you can play with this idea in several ways. I mean, one way to think about it is to consider what would happen if instead of soldiers in Vietnam, there were robots. America pulled out of Vietnam because soldiers were dying. So once you replace people with robots, you lift a lot of restrictions for war. Then, if you replace policemen with robots, you lose the conscience of the policeman. So if you give an order to a policeman that he thinks is preposterous, he may say no, but a robot you can program to do anything.

"If you replace policemen with robots, you lose the conscience of the policeman."

And Verhoeven saw that — he understood that there was a connection between automated violence and fascism, and he created a character where, inside the character himself, he had Alex Murphy fight against the directives. It’s brilliant. And not only that, he ecstatically created a world I hadn’t seen before. It was in your face — like angry, smart angry — and so it’s a great film.

But I didn’t look at it like it’s an iconic movie that I had to match. It’s such a smart idea that it gave me a lot of places to go, so I looked at it in a positive way, not a negative way. I mean, think about doing a reboot of a bad movie that has no substance in it — that would be daunting. And so I just tried to get that concept that they created, and I thought it was time to do it — time to bring it back and to use that concept and that character to a movie that provokes people to think about issues that are relevant today — drones, robots being used for war. This is going to happen. And different countries will have to create different legislation about how to handle those things. The UN will have to decide what to do and what not to do, what to allow and what not to allow, and so on. It’s a real issue that they saw back in ’87, and I took it as an opportunity to start with a very sophisticated idea and then build from there. 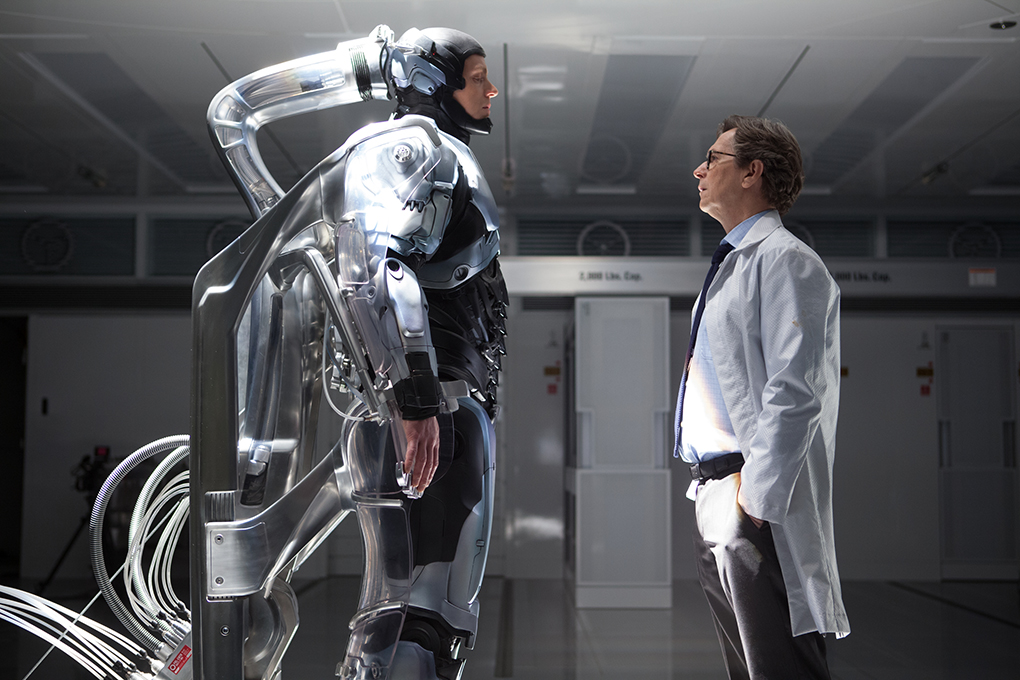 Whether it was the suit and how he looked, or just the state of robotics and technology in real life, what questions did you feel like needed to be answered to update the character for modern audiences, since we’re already at a place where we can have totally automated devices?

"We decided to have Alex Murphy intact."

I think that the RoboCop idea is such a fertile idea that it allows you to talk about the politics of drones and robots and what’s going to happen, but it also allows you to talk about the philosophical issues that have to do with what it is that makes us human. So one of the things we did with this movie is we decided to have Alex Murphy intact — emotionally there, have his memories. He wakes up and he’s there and he finds out he’s a fucking robot. And the first thing he says is, "That’s a fucking dream — what kind of suit is that?" He thinks he’s Iron Man. The guy says, "That’s not a suit, that’s you."

You’ve got [Gary Oldman’s Dr.] Norton saying, consciousness is nothing more than the processing of information — change him and he won’t know the difference. Or, you’ve got Norton saying, the computer’s in his brain and we will send neurological signals making him believe he’s doing what the machine is doing for him. Those are classic philosophical statements about the philosophy of mind. But it all goes back to the original RoboCop, you know what I mean?

The first time he’s going out on patrol, RoboCop’s able to scan for random suspects while digging through information about the perpetrator he’s focused on, which seems to make crime fighting much more efficient. How appealing did you want to make all of his abilities, particularly in an era where the idea of a surveillance state is so fearsome?

I wanted this movie to be grounded. So one thing, for instance, you’ll find is that our robots work. They’re very efficient. Remember the ED-209 couldn’t go up the stairs [in the original], and all of that? We decided, no no, this is going to work — robots are going to be here, and they’re going to function. That I think is what grounded this, because it’s going to be like that. I also think that the connection between software and hardware, into CCTV cameras or internet activities to spot crime, it’s going to play a big role. I mean, just go to London, man — there’s a fucking camera everywhere! It’s going to happen.

And I thought two things about that — let’s give RoboCop that, but I don’t want him to fly. Let’s keep him real. But let’s give him that access, but also let’s talk about what it means, because if you can load into your brain every horrific thing that happens in a city like Rio de Janeiro, it’s hard to deal with. And so he freaks out and he can’t handle it, which is a little bit of saying, a machine can do that, but a man can’t. So it was important to give him powers that were compatible with real-life technology as opposed to impossible powers.

"I think of RoboCop in the territory of very good sci-fi."