Earlier this month, there was yet another lengthy public debate about Upworthy, the two-year-old publisher that has become one of the most popular sites on Facebook due to its knack for overselling its bite-size content with "curiosity gap" headlines like, "Why Is Bill Nye Acting Like A Lunatic? Because He Doesn't Want To Get Blown Up, That's Why."

In the midst of the Twitter argument, Tony Haile, CEO of Chartbeat, which measures real-time traffic for sites like Upworthy, dropped a bomb: "We've found effectively no correlation between social shares and people actually reading," he wrote.

If you work in media, or have a blog, or are the sort of person who pays any attention to things like how many tweets an article has, this statement probably comes as a surprise. There is an implied relationship between the number of people who choose to blast a link to a piece of content and the interestingness of that content. The media industry has fully digested the idea that likes and retweets are marks of merit and that the viral effect of social media is the ultimate affirmation of relevance, which is why every major news organization now has at least one social media editor. To suddenly say that a story is just as likely to have been read by a million people and tweeted by none of them, as it is to have been tweeted a million times and yet never read, seems impossible. And yet, thatâs what Chartbeat has found.

Chartbeatâs lead data scientist Josh Schwartz later clarified to The Verge that Haile was talking specifically about tweets, although the expectation is that Facebook shares would reflect the same pattern. While greater social media shares clearly increase the amount of traffic to an article, that doesnât necessarily mean that more people will actually read it.

Schwartz was hesitant to speculate as to why this might be, saying the data was merely a starting point. But there are a number of possible explanations. Clicks from social media are more likely to come from mobile devices, where readers typically spend less time on the page. It also likely reflects readersâ preferences about what types of links they click â studies show people are more likely to share stories that are happy or nostalgic than they are to tweet about crime, for example. Itâs also possible that some highly retweeted stories contain all the information necessary in the headline without the need to click on the article, as with some breaking news. Or it could just be that we're in the age of the skim, as Slate's Farhad Manjoo wrote last year, and people just don't read things deeply on the internet.

Are we tweeting stories without reading them?

But the most obvious explanation, the one that has probably already occurred to you because youâre just as guilty as everyone else, is that people are tweeting stories without reading them. "I skim hundreds of stories on a daily basis for my job, and yes a portion of those I definitely tweet without actually reading," says Taylor Lorenz, who runs social media for The Daily Mail. "I think anyone who says they fully read and ponder every article before tweeting is lying through their teeth."

Like Chartbeat, Upworthy measures things like scroll depth, clicks, video playback, and other metrics in order to determine whether people are actually reading. Upworthyâs data supports the false-retweet theory: users who consume about 25 percent of an article are more likely to share than users who immediately bounced away or even users who spent more time with it. 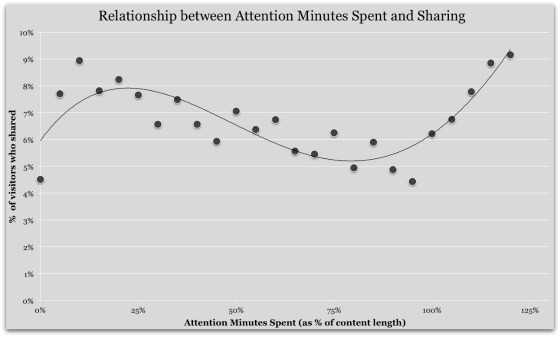 But thereâs more to the story. While Upworthy sees a burst of tweets from people who have consumed just a quarter of the article, it sees an ever greater boost once people have consumed the whole thing. BuzzFeedâs data-science team had similar findings: the majority of social media shares happen after people have been on a page for over three and a half minutes on desktop, or over two minutes on a mobile device.

So if you see someone tweet an article, it likely means they either didnât really read it, or they read every word. That makes it tough to judge a story by how many tweets it has. But new insights into how many people tweet and click versus how many actually read are actually prompting a change in the way publishers market themselves to advertisers. Upworthy, YouTube, and other platforms have started paying less attention to page views and more attention to how engaged people actually are.

Upworthy has started tracking a new metric called "attention minutes," which measures the total amount of time that people spend actively paying attention to the site, along with the amount of attention paid to each piece.

"I think thereâs a group of publishers who say, âLook, weâre web native, we can do a lot more to get a realistic picture of whatâs going on on the web than we ever could in the analog world,â" Upworthyâs director of business intelligence Daniel Mintz tells The Verge.

"Thatâs harder to dupe than page views and uniques. You can turn an article into a 20-page slideshow and voila, you have 20 times the views. Advertisers, and in particular advertisers interested in attention, donât just want empty clicks."

Upworthyâs critics say it maximizes for social media shares, "sending a (false) message to Facebook that those headlines are the stories its users really want to read," as Reuters columnist Felix Salmon put it. But the companyâs new emphasis on the time spent on a story contradicts that claim, suggesting that Upworthy is playing a longer game. While the number of times a story is shared may not be a perfect signal of quality, itâs reassuring to know that stories that hold a readerâs attention all the way to the end are also rewarded by the Twittersphere.