All the big camera manufacturers headed out to CP+ in Japan this week with something new to show. Fujifilm had the X-T1, Sony had the A6000, and Nikon had the slew of point-and-shoots that it unveiled last week. Canon and Sony joined Nikon in unveiling their own slates of new and updated point-and-shoots around the event. But while all three companies unveiled their cameras within a week of each other, their latest lineups have fairly different focuses. 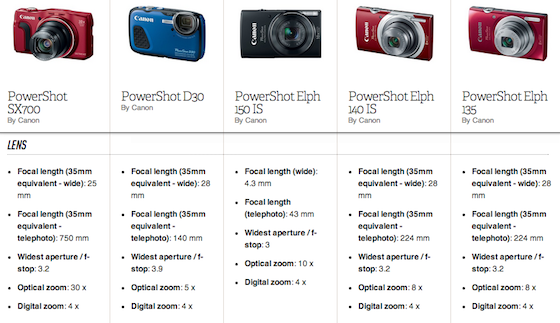 Click above for full specs on all five cameras.

An eye on affordability

Canon's latest point-and-shoots are all fairly basic affairs. While Nikon and Sony's new cameras both try their best to give compelling reasons to use one over a smartphone, three out of Canon's five new PowerShot point-and-shoots just aim for affordability.

The PowerShot Elph 135, 140 IS, and 150 IS are all nearly identical in specs, start below $150, and are each just $20 apart from another. Each has a 1/2.3" sensor — larger than the average smartphone's, but not dramatically so — and can zoom in to the equivalent of 200mm. Their differences are slight: the 135 doesn't include image stabilization, and the 150 IS can zoom a bit farther than the other two. Canon isn't aiming to win any hearts with these cameras, just appeal to an incremental set of prices so that no potential buyer is left out. (Even so, the new cameras don't do all that much to stand out from their similarly priced competitors.)

Canon's other new cameras, the PowerShot D30 and SX700, are a bit more interesting. The D30 is waterproof down to 82 feet and thoroughly bests Nikon's new waterproof point-and-shoot, which goes down to just 59 feet and costs $20 more. The SX700 is focused on zoom, with a telephoto range going out to an equivalent of 750mm. It's fairly similar to Nikon's new Coolpix S9700, as both have the same zoom range and pricing. There's no clear-cut winner, though Canon probably has an edge: the SX700 has a wider aperture and can shoot a bit faster all around. 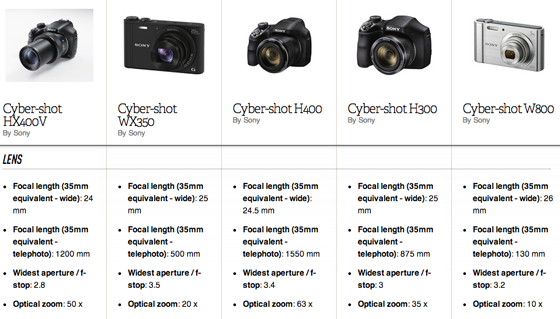 Click above for full specs on all five cameras.

Sony's cameras, on the other hand, each do a bit more to stand out. First, there's a trio of cameras with large zoom ranges, the Cyber-shot HX400V, H400, and H300. The star of the show may be the H400, which is capable of zooming out to the equivalent of 1550mm. Though the more expensive HX400V doesn't zoom as far — only to 1200mm — it has a newer processor and builds in Wi-Fi, NFC, GPS, and a higher-resolution display, making the camera far more accessible. The final in the trio, the H300, zooms out to just 875mm, but it's also priced at $219.99 — not all that much above a far more basic point-and-shoot. Though feature-wise there's nothing strictly unheard of here, Sony's relatively low pricing on this trio makes them fairly competitive with the pair of superzooms that Nikon announced just last week.

There's also a pair of general-purpose point-and-shoots introduced by Sony this week: the Cyber-shot WX350 and the W800. Though they include sensors of the same size, the WX350 is more capable, largely thanks to the inclusion of Sony's latest image processor, the Bionz X — the same one used in the full-frame A7 and A7R. The W800 is Sony's budget alternative; it's hard to get excited over it in a world of capable smartphone cameras, but at least it's relatively inexpensive and includes Wi-Fi and NFC, two connectivity features that are often left out of less expensive cameras.

Though the general wisdom for building point-and-shoots these days has been to differentiate them toward specific needs, that's not particularly evident within Sony or Canon's newest cameras alone. Of course, both are just additions to already mature lines of point-and-shoots that cover a much wider range. While neither companies' basic point-and-shoots may be very exciting to a smartphone owner, Sony's new superzooms and Canon's new waterproof camera certainly find ways to stand out.

There were a bunch of other products announced this week too:

If you want to learn more about any of the products mentioned above, all of our information on them can be found through the database box located beneath the article. For more on cameras, tablets, and just about every product around, you can check out the full Verge Database right here.