A recently leaked Windows Phone 8.1 Software Development Kit (SDK) has provided an early look at some features Microsoft is planning for its next mobile update. However, the software maker is also planning many more additions in time for April that aren’t immediately visible in the developer kit. LiveSino reports that the SDK includes references to a "change your phone’s background" option to set a background image beneath the Live Tiles on the Start Screen. Windows 8.1 introduced such an option on tablets and desktop PCs, and Windows Phone 8.1 will provide a similar feature to match the Live Tile accent color. Sources familiar with Microsoft’s Windows Phone plans have revealed to The Verge that the company is also experimenting with transparent Live Tiles and options to skin Tiles with images. It's not immediately clear if there will be a mixture of options or not.

We're also told that Microsoft is currently experimenting with a three-column layout for the Start Screen across all devices. Microsoft introduced a three-column Start Screen for devices with large screens, but we understand existing handsets like the Lumia 920 and 1020 will be able to enable the new layout with Windows Phone 8.1. LiveSino has discovered this particular setting is available under a "show more Tiles" option, but the default layout for smaller-sized phones will be the traditional two-column UI. 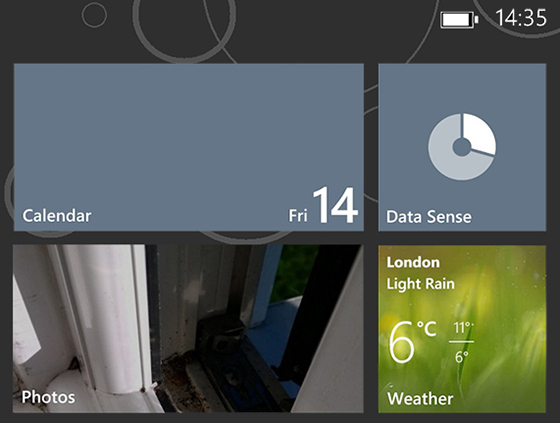 Mockup image of how background images on the Windows Phone 8.1 Start Screen might look

Other changes that have been recently discovered in the Windows Phone 8.1 SDK include the ability for app developers to enable video editing and screen recording features within their own applications. There’s also a mention of Miracast support to mirror / extend a phone's display to a monitor or TV wirelessly, but Microsoft’s SDK documents note the company may not be able to provide this feature in time for the final version of Windows Phone 8.1. Microsoft is expected to release Windows Phone 8.1 to developers in early April.