Under pressure from the Kremlin, Russia's media has painted a starkly different picture of the Winter Olympics

When the Winter Olympic Games opened last week in Sochi, much of the conversation on social media focused on the event's shortcomings: poor sanitation, empty stadiums, hotels in disrepair. But a very different, and far more worrying Sochi story has been unfolding in the mainstream Russian media, where many reporters and broadcasters are being muzzled by a government intent on presenting itself in the best light possible.

Late last month, the Committee to Protect Journalists (CPJ) published a damning report on how Russian media outlets have been silenced when trying to report on negative Sochi stories: forced evictions of local residents, exploitation of migrant workers, and environmental damage caused by construction projects. In just about every case, government agencies quashed the stories outright, or through implicit threats. It's a grim scenario, and one that has become all too common in Russia, where President Vladimir Putin has slowly but surely consolidated control over the country's major media outlets over the past few years.

"The majority of news outlets, particularly those controlled directly by the state, prefer to cover Sochi the way they would cover a deceased man: in a positive light or not at all," the report reads.

"see a new Russia, see its face and possibilities, take a fresh and unbiased look."

The games got off to an ignominious start last week, when a giant display of the five Olympic rings malfunctioned during the opening ceremony. Pictures and video of the display spread like wildfire across social media, but TV viewers in Russia saw something slightly different. State-owned broadcaster Russiya 1 cut to prerecorded rehearsal footage once notified of the glitch, with producers telling the Associated Press that the decision was made to preserve the integrity of Olympic tradition.

It wasn't the first Olympic mishap to be edited out of a broadcast, and it's far from a criminal coverup. But the incident does speak to the great care with which Russia is treating the image of these games. They're already the most expensive Olympics in history, and Putin has branded the event as an opportunity for Russia to reassert itself on the global stage.

"I would like the participants, fans, journalists and all those who watch the Games on television to see a new Russia, see its face and possibilities, take a fresh and unbiased look at the country," Putin told reporters last month.

Before last week's opening ceremony, however, the Olympics had been largely overshadowed by fears of terrorism, Putin's anti-gay propaganda laws, and alleged corruption and labor abuses. These issues have been well documented by Western media outlets, but have gone largely unreported within Russia itself. Russian journalists who attempted to report these stories have so far been met with stiff government resistance.

"They were gagged, and they were gagged very strongly," says Nina Ognianova, coordinator of the Europe and Central Asia Program at the CPJ, and co-author of the report released last month. "They were harassed into stopping their coverage, journalists who had independently reported on the negative impact of the games were taken off the story [and] substituted with more obedient reporters. And that was done under very direct pressure of various governmental agencies."

"we have to write that all skies are clear over Sochi."

One case detailed in Ognianova's report involved a Sochi correspondent who filed three separate stories to her editors in Moscow — one about the controversial arrest of a journalist, one about poorly constructed water facilities at a complex for evicted residents, and a seemingly innocuous piece about worsening weather conditions in Sochi. Her editor rejected all three.

"You may have a storm, a twister, and even a 9-Richter-scale earthquake," the editor told her. "Still, we have to write that all skies are clear over Sochi." 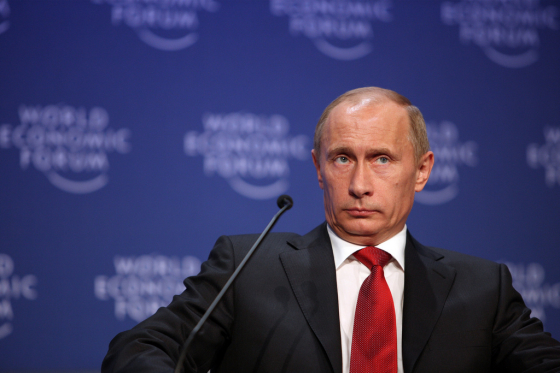 The Sochi skies have indeed been pleasant so far, but conditions on the ground there have been anything but. Once the games began, the conversation among Western journalists quickly shifted to the shoddy and apparently unfinished facilities within the Olympic Village. Images of yellow tap water, half-finished sidewalks, and packs of stray dogs began circulating across Twitter and other social media, raising serious questions over how authorities spent the reported $51 billion in Olympic funding — more than the combined cost of all previous Winter Olympics.

Unlike the regional, and far more serious stories described in CPJ's report, the issues surrounding Sochi's facilities were too widely reported for the Russian government and mainstream media to ignore. Their reports and statements have been largely defiant, however, with Russian officials accusing Western media outlets of biased coverage. Putin and others claim the West's critiques are rooted more in envy of Russia's success, rather than truth.

"Whenever Russia demonstrates any positive development, the appearance of a new strong player, of competition, is bound to cause concern in the economy, in politics and in the security sphere," Putin said this week. "We see attempts to deter Russia here and there. Unfortunately, this had to do with the Olympic project."

In an article published to its website this week, the network RT — largely seen as a Kremlin mouthpiece — accused the Western media of needless Russia bashing, writing that reporters are "overblowing certain problems into catastrophic proportions." The Putin-friendly newspaper Pravda struck a similarly accusatory, if hypocritical tone on Monday, lashing out at NBC for editing its opening ceremony footage to cut out "all the positive moments about Russia."

"Russia as a besieged fortress, with hostile forces outside."

Spinning negative international stories into galvanizing rhetoric is a common tactic among government-controlled media, says Maria Lipman of the Carnegie Moscow Center. Authorities typically portray any criticism from Western media as the work of outside forces that want to see Russia fail, or are envious of its rise. Such anti-Western rhetoric has intensified and persisted since 2011, Lipman says, when disputed parliamentary elections sparked widespread protests, forcing Putin to consolidate his conservative base.

"It creates a sense of Russia as a besieged fortress, with hostile forces outside," Lipman says. These forces are "normally not very specific," she adds, though "it is assumed that it's the West."

There are of course some independent journalists and bloggers still reporting on the darker side of Sochi — a group headed by prominent activist Alexei Navalny recently published an interactive website outlining the massive corruption and croneyism behind the Olympic project — but Lipman says they don't have nearly the same reach as state-controlled media, and their platforms are dwindling.

Putin has gradually tightened his grip over the Russian media in recent years — whether through vaguely-worded laws that give the government freer rein to prosecute journalists, or through implicitly endorsed corporate maneuvers to place pro-Kremlin interests in charge of major media companies.

Earlier this month, independent Russian television station TV Rain announced that it was on the brink of bankruptcy after one of Russia's main providers said it would no longer carry the channel. The decision ostensibly came as a response to a controversial poll that TV Rain published on its website, asking readers whether the Soviets should have surrendered Leningrad during World War II, but many speculate that the shutdown was politically motivated and months in the making. For free press advocates, its demise underscores what has become a sad reality.

"The space of non-government media that pursue even relatively independent editorial lines has shrunk, and continues to shrink," Lipman says. "And this trend is bound to continue."

Update: A previous version of this report stated that Russian TV viewers did not see the Olympic ring debacle during the broadcast. The piece has been updated to reflect the inaccuracy.