Share All sharing options for: Philips takes on Apple's iBeacon with lights that send deals to your smartphone

Philips is already one of the biggest names in smart light bulbs, and now it's beginning to test a new unit that could be even smarter. At a retailer in Düsseldorf, Philips is piloting a lighting unit that includes a built-in beacon that can relay location and product information to smartphones. By opening a companion app, shoppers can see a map of the store they're in, including their exact location as determined by the beacons' communication with their phone. From there, a shopper might search for a product they're looking for, while the beacons track their movement and provide directions to the right aisle.

Shoppers could be given deals on nearby products

The connected lighting system is Philips' answer to a slew of emerging tools that allow retailers to interact with shoppers' smartphones as they walk throughout a store. Most of these options — including the most prominent one, Apple's iBeacon — rely on lightweight transceivers located in and around shopping displays to ping shoppers with deals and highlights when they move nearby. It's not clear how cost effective it would be to move these inexpensive beacons into lighting units, but it's a surprisingly logical pairing otherwise: the beacons could have full coverage of a store, and installation would presumably be quite straightforward. Philips' system uses flickers of light to communicate with phones, presumably allowing it to work with anything that has a camera.

For now, Philips is only running a demonstration of the new technology, and it hasn't said when or if its connected lighting system will see a wider distribution. As most retailers have yet to adopt in-store beacons, there's still plenty of room for competition. But with major names like Macys, American Eagle, and MLB ballparks already trying out iBeacon, it appears there's a good amount of interest out there already. 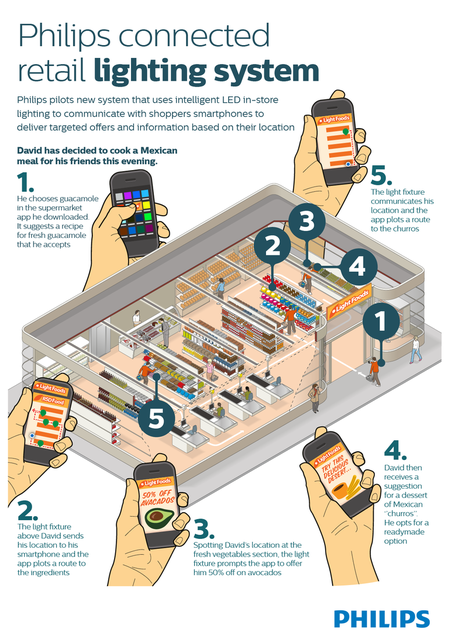