If portrait video is wrong, these artists don't want to be right

Portrait videos are a touchy subject. As the logic goes, our eyes are side by side, not stacked on top of one another, making tall and skinny videos something subconsciously unsettling. In a very popular YouTube video two years ago, puppet comedy group Glove and Boots went so far as to call anything shot vertically "crap," while referring to frequent portrait shooters as sufferers of "vertical video syndrome."

But in Europe, a group of filmmakers have rejected that notion, and are using the format as a new medium for art. There's a festival for films made specifically for a tall and lean screen aptly named Vertical Cinema. And to make it all work, the festival's creators have come up with a special projector that stretches from floor to ceiling in locations picked specifically to overwhelm viewers with towering images. 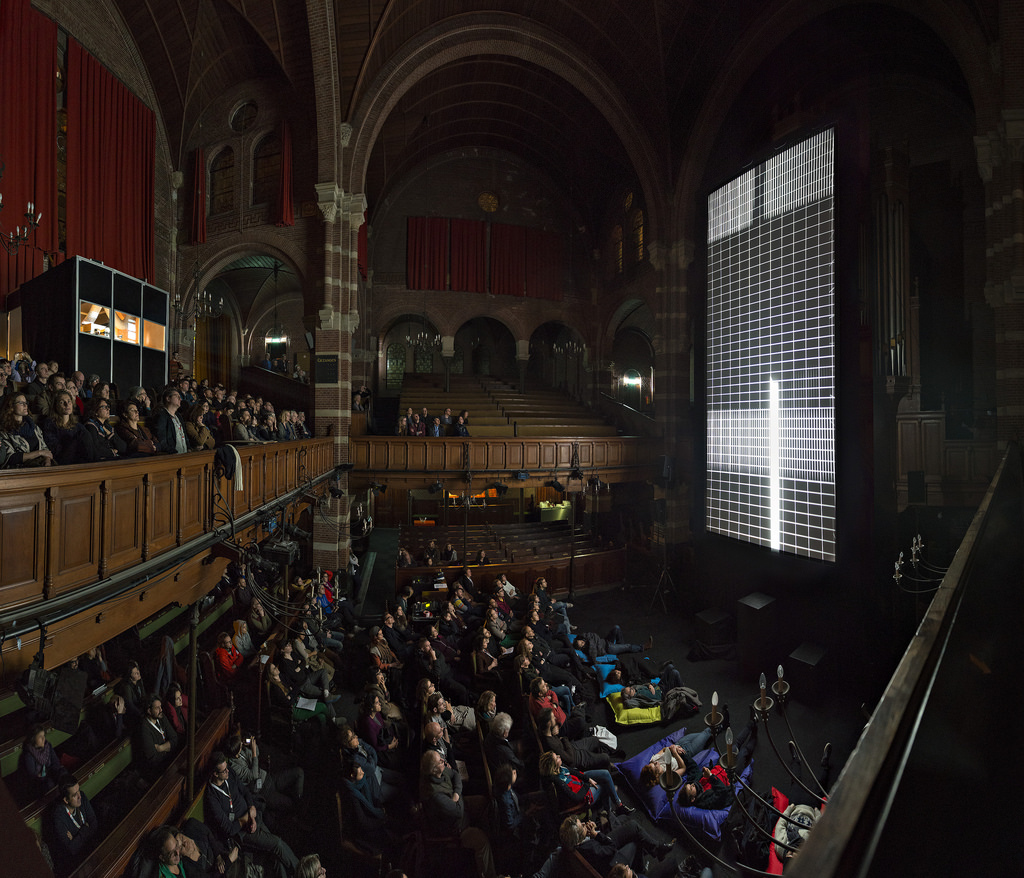 That was the case in Rotterdam last month at the second showing of the Vertical Cinema project. The festival's creators picked the Arminius, a massive church built at the very end of the 19th century, and where the show's tall screen gently rested in front of the gleaming pipe organ. Later this week it heads to Amsterdam, followed after that by a possible tour in other countries.

The entire project, which began last year in Austria, is more of a giant art installation than an argument to the film industry that vertical videos could replace the tried-and-true cinema experience. "It is not an invitation to leave cinemas — which have been radically transformed over the past decade according to the diktat of the commercial film market — but a provocation to expand the image onto a new axis," its creators say on the festival's about page . "This project rethinks the actual projection space and returns it to the filmmakers. It proposes a future for filmmaking rather than a pessimistic debate over the alleged death of film."

The short films being shown were all commissioned by the festival's creators and are mainly exercises in sensory overload. They barrage viewers with loud, often rhythmic static and bright light patterns. One piece, called Pyramid Flare, bucks that by spending the better part of five minutes taking viewers around the outskirts of the pyramid-shaped Pyramida Theatre music hall in Prague, never breaking sight with the building. It was filmed using a 35mm camera turned on its side, and tracks the building throughout the day, from different parts of the city. Not all projects are films though. In fact, most come from audiovisual artists which have had their digital works printed on 35mm film.

While simple to film, turning the typical movie experience sideways required modifying existing projectors. The festival's team bought a Kinoton 35mm projector and took it apart in order to rotate the shutter housing and filmgate by 90 degrees. They then rebuilt the rest of the projector around the modifications.

"Most 35mm projectors are not suitable for this."

"Most 35mm projectors are not suitable for this, since the shutter has an oil bath, and the oil will leak out when tilted," says Lucas van der Velden, a curator for Sonic Acts , which produced the show. The group opted to use a model with an electronic shutter instead, meaning it can be turned any which way.

The project is the latest in a long line of non-standard film projection efforts. One of the main inspirations for this one comes from the 1967 International and Universal Exposition, held in Montreal. A five-story building called the Labryrinth was built with three chambers, including two that held multiple movie screens set up to overwhelm viewers in a non-standard filmgoing experience. The festival creators also cite the Phillips Pavilion, a similar specialty theatre designed for the 1958 World's Fair, that would project video and music across the walls as fair attendees made their way through the building.

Ultimately, that kind of experience where viewers feel taken aback and possibly unsettled is what this is all about.

"Why not make a series vertical works?" van der Velden asks. "After all, regular widescreen is a bit boring."