Share All sharing options for: Wearables startup Cuff makes technology you may actually want to wear

There’s little doubt that most wearable technology currently focuses more on function than form — but that will have to change if the category has a hope of going truly mainstream. That’s the mindset of a San Francisco-based startup called Cuff, which has just announced a new line of wearables (available to pre-order now) with a goal of making technology you’ll actually want to wear and show off. Cuff’s accessories are also different than the current wearables marketplace in another way — rather than focusing on fitness tracking or smartphone notifications, Cuff is positioning its product as a personal security system that lets you quickly reach a pre-designated circle of trusted contacts. 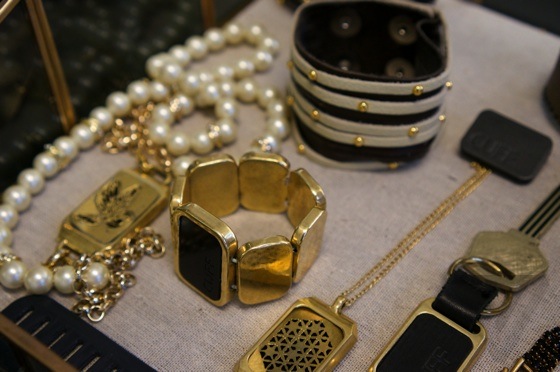 The whole system is based off the CuffLinc: a small black tracker that owners can move between any of the nine different fashion accessories the company is bringing to market. Using the accompanying iOS app, you can set up your CuffLinc and find other friends and family using the product to build your network. "Imagine a mom puts [a CuffLinc] on her teenage daughter and also puts it on her aging mother," explains Cuff founder Deepa Sood, a former VP of product at Restoration Hardware. "When you press it, they get a sort of smart propagation depending on who's closest in your social network and who's closest geographically. And then the receiver, if they're wearing a cuff, their cuff will vibrate."

"Our first function is security."

From there, you can open the Cuff app and find out exactly where the person who sent the alert is, thanks to the built-in GPS chip. "If they're not wearing a cuff, which many men won't be wearing a cuff, the alert goes right to their phone, and that gives you geographic information," says Sood. "The idea is that you buy a couple different pieces and you move the CuffLinc around," she says, "and you buy it for your loved ones to protect them, because our first function is security."

There’s some flexibility here, as well — the iOS app (the company hopes to launch on Android as well) will let you get more granular with the CuffLinc’s alert system. By double-clicking the CuffLinc, for example, you could send a notification directly to your spouse without alerting the rest of your network. You can customize the vibration pattern, as well, so the recipient will know it’s not a real emergency. "S.O.S. is the primary function, but even in the first roll out it's not just for emergencies," says Sood. "If I’m wearing the Cuff, I can program it so my husband and my babysitter can always get through to me even if my phone's not on me — it'll vibrate and them I know I have to step out and reach them." 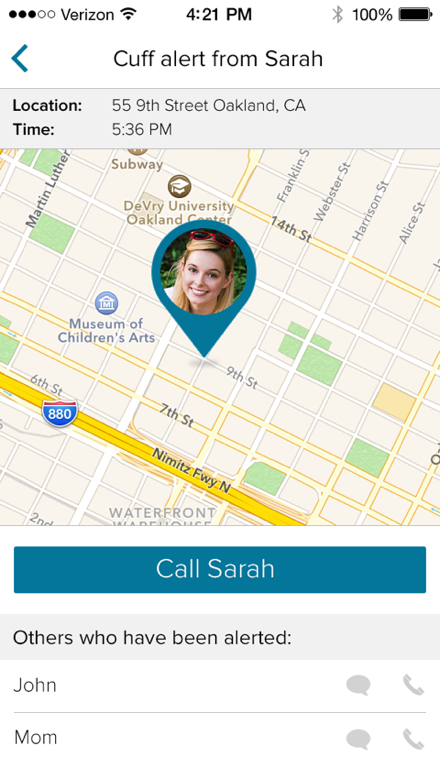 It’s a bit of an esoteric and new use case for wearable technology, but Cuff is already thinking about more features it can add down the line. As the CuffLinc is connected to your phone with Bluetooth, the team envisions using it as a remote to trigger different features, like skipping songs or taking a photo. "Very soon we’ll be peeling off behavior from your phone," says Sood. "We’ve talked about taking a picture, or making your phone ring to get out of a bad date. People really liked that one."

New features will be enabled via a software update, and different click patterns can be assigned to trigger your phone. And you won’t have to worry about charging — the CuffLinc’s non-replaceable battery should power it for a year, at which point you’ll receive a notification that you’ll unfortunately need to purchase a new one.

Wearable tech with style — but you'll have to wait for it

Perhaps more important than the technology behind Cuff is the company’s fashion-first sensibility: if people don’t actively want to wear the company’s products, they’ll never catch on. To that end, Cuff will offer nine different items, ranging from a simple keychain to more attention grabbing leather and metal bracelets, necklaces, and pendants — each of which comes with a CuffLinc that can be embedded invisibly inside the piece of jewelry. The metal pieces come in either silver or gold plating, while the leather pieces also come in two different color options.

While Cuff may be clearly targeting a feminine market with these first pieces and the style is, as always, a matter of personal taste, there’s little doubt these are some of the most stylish wearables we’ve seen on the market. And Sood has greater ambition for the Cuff line than just this first set of jewelry the company is launching — she wants other makers to start producing CuffLinc compatible pieces, building out an ever-expanding collection. If this first set doesn’t work with your style, there may be something down the line that does.

Unfortunately, it’s going to take some time before we know whether the Cuff system takes off — even though preorders are now open (with accessories priced at $35, $65, and $125, including a CuffLinc), they won’t ship to customers until the end of the year. Cuff hopes to add more features, hopefully release more jewelry variations, and even find retail partners between now and then, but right now its a bit akin to buying into a Kickstarter or beta project — you don’t quite know what you’ll get at the end of the year. And while Cuff has a lead on making a fashionable that you may actually want to wear, that could change in the coming months. But for time being, if you want to support a fashion-first wearables company, Cuff’s line of products are open for pre-order now.