Most recently, he rented a helicopter to photograph several intelligence headquarters: the (now) well-known National Security Agency; the National Reconnaissance Office, which administers intelligence satellites; and the National Geospatial-Intelligence Agency, which provides mapping and geographical data to the government. Paglen released his images into the public domain. Via email, he discussed what intrigues him about such secret spaces and what images of them allow us, the viewers, to consider.

You’ve long been intrigued by images of what you call “blank spots on the map” — a worldwide archipelago of classified military bases, intelligence headquarters, and monitoring installations that comprise the secret state. What makes you want to portray those spaces?

American intelligence and military agencies have a huge footprint in terms of how the world works, but they’re largely invisible. I’m interested in exploring those “geographies” of secrecy from many different angles: political, legal, economic, spatial, etc., because I am fundamentally just interested in how the world works and how societies work. On a more artistic level, I’m interested in questions having to do with what we can know and what we can’t, the relationship between visibility and invisibility and so on. Seeing various aspects of the secret state and surveillance state echoes a long tradition in art of looking at the sublime. If someone like [German Romantic landscape painter] Caspar David Friedrich were alive today, I think he’d be pretty interested in drones, for example.

As you point out, the predominant image of the NSA headquarters has been one supplied by the agency, showing a full parking lot and a mirrored-glass, apparently unremarkable office building. What can a photograph show us, when it comes to such a building?

"Photographs help us learn how to see."

Photographs don’t “reveal” much at all but instead help us generate a kind of visual vocabulary that we can use to make sense of the world, and direct our attention to certain things around us. In other words, they help us learn how to see.

Much of your work has a blurred, impressionistic quality, the look of something half-glimpsed from a distance. The most recent photos have a much clearer, perhaps “documentary” look. What made you choose that approach? And why shoot at night?

Most of my images of “black” sites are shot from great distances using telescopes and other high powered optical systems. With those images, the blurriness comes from the heat, haze, and atmospheric distortions that occur when looking at something so far away. I always intended the new NSA, NRO, and NGA photos to go into the public domain (which is the point of the project) and I wanted them to be a little more “usable” in different contexts. I didn’t want them to have as strong an aesthetic “signature” as my other works. 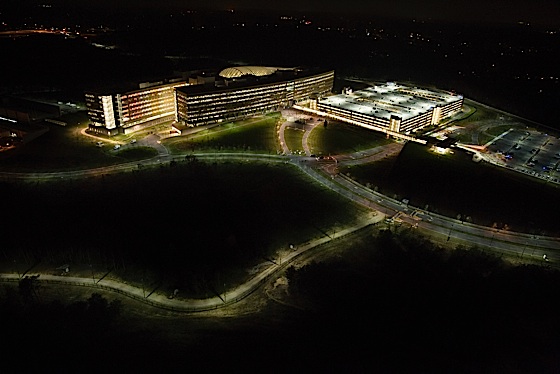 "The NGA in particular looked at night like some kind of bioluminescent jellyfish in the deep sea."

Thinking about how to shoot the buildings was a real challenge because they are really boring corporate buildings. I was thinking a lot about the NSA building and had remembered some things James Bamford had written about the size of its parking lot. I was thinking about the parking lot in relation to the black-glass building architecture and realized that, at night, the parking lot would be brightly lit up and the building itself would form a kind of negative space in relation to that light. That seemed like a nice little analogy for what the NSA does, so I tried to shoot it that way. Similar things happened with the NRO and NGA. The NGA in particular looked at night like some kind of bioluminescent jellyfish in the deep sea. I thought that was interesting as well.

What do you see when you look at these photos?