Pesticides are everywhere, and more dangerous than you realize

Pesticides are everywhere, and more dangerous than you realize

They're sprayed in abundance, but research on these chemicals remains surprisingly scarce

Most of us think we're protecting ourselves from noxious chemicals with half-superstitious gestures: filtering the water we drink a pitcher at a time, or confining ourselves to the organic aisles of supermarkets. But we forget that aside from the frightening array of incidental toxins we take in every day, there's a class of intentionally harmful chemicals we're constantly exposed to: insecticides. A specific group of bug-killers, pyrethroids and pyrethrins, have been soaring in popularity in recent years and now account for more than a quarter of the global market.

Pyrethroids are chemical simulations of pyrethrins, naturally occurring compounds in dried chrysanthemum flowers that incapacitate insect nervous systems. They've been around since the late 19th century, but had long been passed over for quicker-acting compounds — namely organochlorines like DDT, and organophosphates. But a curious reverse relay race has been in progress since the 1960s, wherein these powerful, fast-acting, more harmful chemicals are being replaced by slower, less persistent ones, presumed to be less toxic to humans.

Notwithstanding organophosphates' sinister origin story — they were developed alongside deadly nerve agents like sarin during the Nazi regime — in the 1970s they were considered a safer substitute for DDT since they degraded rapidly in the environment and the human system was thought to be capable of detoxifying them. That presumed safety was revealed to be false two decades later, when organophosphate poisoning was found to have caused 200,000 deaths worldwide in a single year. In 2001, the EPA banned them from households due to the risks they posed to the developing brains and nervous systems of children. Pyrethroids and pyrethrins have since taken their place.

Sprinkled over lawns, soaped onto pets, sprayed on offending vermin

Across cities and suburbs, pyrethroids and pyrethrins are sprinkled over lawns, soaped onto pets, sprayed on offending vermin, and occasionally applied to our own persons in the form of lice-killing shampoos or mosquito repellents. They're also used in landscaping, in fumigating drives against mosquitoes, and in agricultural crops and nurseries. In 2009, the US Environmental Protection Agency (EPA) found pyrethroids and pyrethrins in more than 3,500 registered commercial products. This tally didn't include the many hundreds of illegal pest-control products that stream in from elsewhere, like the wildly popular "miraculous insecticide chalk" from China.

This month, a study out of the University of California, Davis, showed that the use of these pesticides is soaring. Of the urinary samples taken from adults and children in 90 California families, two-thirds had breakdown products of pyrethroids. Pyrethroids and pyrethrins are just as popular on the East Coast. A study published last September in Environmental Health Perspectives examined urine samples from 1,452 New York City residents for breakdown products of pyrethroids, and found that participants were disproportionately exposed to chemicals. Going by one breakdown product, trans-DCCA, New Yorkers were more than twice as exposed to pyrethroids than people living in the rest of the country. 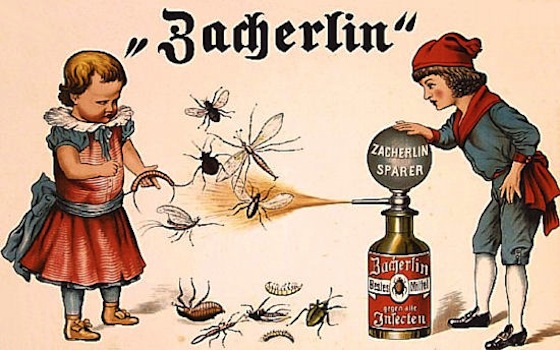 A 1907 advertisement for pyrethrum spray, which was originally developed by Austrian inventor Johann Zacherl. (Wikimedia Commons)

Pyrethroids and pyrethrins are thought to be safe due to their botanical origins — even though some of them are just chemical simulations of those compounds. Nonetheless, in November 2011, the EPA reinforced that perception by stating that pyrethroids "posed health risks below the agency's level of concern." This assessment was based on experiments with adult rats, not long-term studies of humans or children exposed to pyrethroids, so the presumption of their comparative safety has largely gone untested so far.

And there are signs that this gap urgently needs to be addressed. In 2008, the Center for Public Integrity analyzed 90,000 adverse reaction reports and found that health problems linked to pyrethroids had increased 300 times in 10 years. The problems included burning and tingling skin, respiratory trouble, involuntary twitching, dizziness, nausea, fainting, convulsions and seizures. In Australia, a union representing transport workers is even mulling a class action lawsuit on behalf of air stewards who allege they suffer neurodegenerative diseases as a result of exposure to the insecticides.

Indeed, two recent studies have linked pyrethroid use to adverse changes in the developing brain. This September, a study on Canadian children found that exposure to pyrethroid insecticides was linked to behavioral problems reported by parents, while a 2011 study of mothers in New York found a strong association between prenatal exposure to piperonyl butoxide — an additive commonly used in pyrethroid sprays — and delayed mental development in toddlers.

Youssef Oulhote, the lead author of the first study, analyzed concentrations of organophosphate and pyrethroid breakdown products in urine samples from 779 children across Canada, comparing them with mental and behavioral difficulties. The results were startling. Oulhote found that a tenfold elevation in urinary levels of cis-DCCA, a breakdown product of common pyrethroids, was associated with a doubling in the odds of behavioral problems. "It's consistent with findings from experimental studies in animals, which found that pyrethroids led to brain damage and behavioral problems," says Oulhote. "Pyrethroids are considered less harmful than other pesticides — but that doesn't mean they're safe."

"Pyrethroids are considered less harmful than other pesticides — but that doesn't mean they're safe."

From his research, Oulhote says that pyrethroids likely interfere with the regular functioning of the central nervous system, and introduce alterations in the microanatomy of the brain. Robin Whyatt, an expert on environmental exposures at the Columbia Center for Children, and the co-author of the 2011 study, points out that "the brain is the most highly developed organ in the body, and fetal brain development unfolds in a very precise, very controlled manner in time and space. Any interruption can have a far greater effect — a fully developed brain will have nowhere near the same impacts."

Why, then, the dearth of research? Megan Horton, an epidemiologist at the Mailman School of Public Health who led the 2011 study, has a few ideas. "Pyrethroids are considered more difficult to study, since they rapidly metabolize, and are harder to measure in samples," she says. "Then, they're spun [by marketers] as a sort of natural compound, when in fact they're chemically manipulated to be more persistent, more toxic." And while translational studies on rodents could point to some biologically plausible clues about how poisons exert their force, mice are not people or babies.

"We rely on a snapshot: one time, one urine sample."

The biggest challenge lies in the inherently restrictive nature of studies examining long-term exposures in humans, which are time-consuming, expensive, and strictly observational. "A regulatory system that utilizes animal studies can't simulate the effect of toxins on children," says Melissa Perry, an expert in environmental and occupational health at GWU's School of Public Health. "We can't use experimental methods with humans," she notes. "So we rely on ... a snapshot: one time, one urine sample." Oulhote agrees. "Our main limitation is the design of the study," he says. "It draws an association, not a causal link." To actually change policy, observational studies need the backing of mechanistic work — studies that reveal the biochemical tricks that poisons deploy on cells, tissues, and organs.

Whyatt, who recently received an NIH grant to study the effect of prenatal pyrethroid exposure on children's mental development, is planning a study she hopes will fill that gap. In 2011, she and Horton found a significant association between the concentration of piperonyl butoxide and mental development. But since there were no previous studies on piperonyl butoxide, they didn't know if the effect was due specifically to piperonyl butoxide or more broadly to pyrethroid exposure. "With this grant, we're teasing apart that finding, since we're looking at metabolized pyrethroids in mother's urine," says Whyatt. "But as in any epidemiological study, it'll be a long time before we have any answers."