Facebook has entered into an agreement to purchase WhatsApp, the massively popular messaging client, for $16 billion in cash and stock. A document filed with the SEC today confirms the huge purchase. As was the case with Instagram, the company says WhatsApp will continue to operate independently after the acquisition — separate from Facebook Messenger — but claims the deal "accelerates Facebook’s ability to bring connectivity and utility to the world." Facebook is also throwing in an extra $3 billion in restricted stock units that will go to WhatsApp’s employees; those will vest over a period of four years after the acquisition is finalized.

In a press release announcing the monumental buyout, CEO Mark Zuckerberg said, "WhatsApp is on a path to connect 1 billion people. The services that reach that milestone are all incredibly valuable." He also shared news of the deal on his personal Facebook page, saying, "WhatsApp will complement our existing chat and messaging services to provide new tools for our community." Over 450 million people use WhatsApp each month, according to statistics in the press release, with 70 percent of those users active on a given day. WhatsApp co-founder and CEO Jan Koum will join Facebook’s board of directors as part of the deal, but his team will remain stationed in Mountain View, California.

"Doing this will give WhatsApp the flexibility to grow and expand, while giving me, Brian, and the rest of our team more time to focus on building a communications service that’s as fast, affordable and personal as possible," he said in a blog post. According to Koum, users don't need to worry about ads "interrupting your communication." "There would have been no partnership between our two companies if we had to compromise on the core principles that will always define our company, our vision and our product," he said. 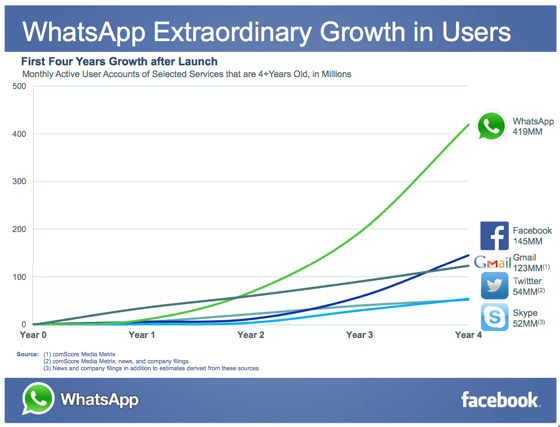 Update: In a call with investors following the deal, Zuckerberg said he proposed the purchase to Koum on Sunday, February 9th, with the two agreeing on a price a few days later. Zuckerberg also went into more detail on why Facebook will hang on to its existing chat services, which he views as something people use to send one another messages asynchronously instead of in real-time. "We think that those are two different use cases, and that the world needed both," he said.

Analysts also asked Koum and Zuckerberg whether the deal meant that ads were coming to WhatsApp. Koum responded to by saying the two companies were more focused on growing how many people were using the app over how money will be made off it.