IKEA's plan to discontinue its Expedit shelving unit has record collectors panicking. The grid-like furniture has a cult following amongst record collectors and DJs, thanks largely to its dimensions that are perfect for storing vinyl records. News of Expedit’s demise first surfaced in Germany last month, and the Swedish furniture company's plan hasn’t gone down well with vinyl enthusiasts. A Facebook group set up to save the shelving unit has amassed more than 18,000 likes, highlighting its popularity.

However, the panic, love, and support for IKEA's Expedit could be misplaced. The Swedish firm is planning to replace Expedit with Kallax, an almost identical grid-like shelving unit with thinner sides and rounded edges. Some record collectors are aware of the replacement, but the fear is that the thinner version won’t be sturdy enough to support the hundreds of vinyl that the various 4 x 4 and 5 x 5 Expedit configurations allow. IKEA clearly understands that the Expedit is a popular choice for record collectors, as the company ran a promotion with a DJ last year to highlight the way the shelving unit helped organized more than 4,500 records. The Swedish company has also responded to the outcry by reassuring record collectors that the Kallax replacement will have the same internal dimensions and load support. That hasn’t stopped the panic, though. As their choice of music format suggests, vinyl enthusiasts are resistant to change. 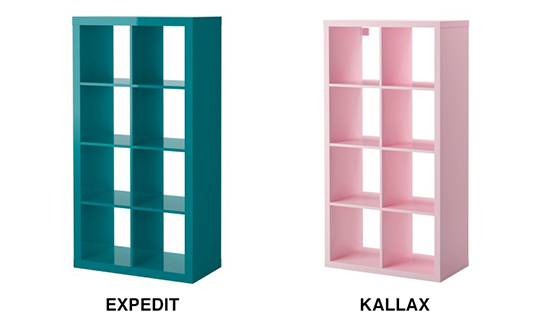