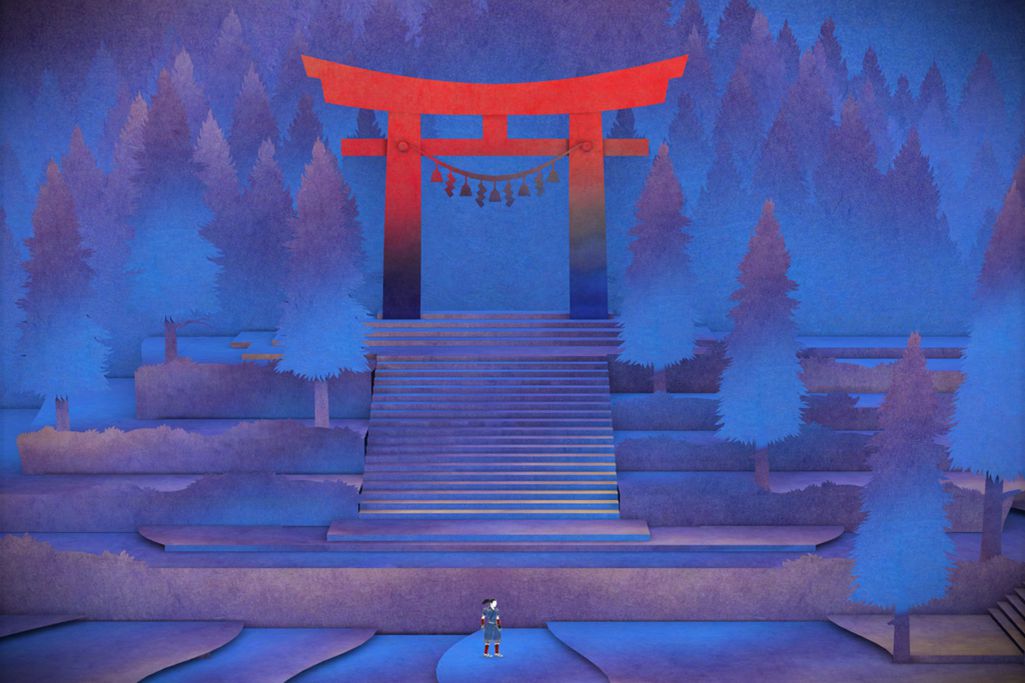 Three people have spent the past three years building a video game that works like a pop-up book.

Launching today for iPad, Tengami is a beautiful adventure that looks like a cross between a children's pop-up book and Japanese origami. And that theme doesn’t just extend to the way the game looks, but also how it feels — you'll use the touchscreen to push and pull the world around, manipulating it just like you would a physical book. "A pop-up book is essentially a toy book," says co-developer Jennifer Schneidereit, "and we wondered what would happen if we translated that into a video game." 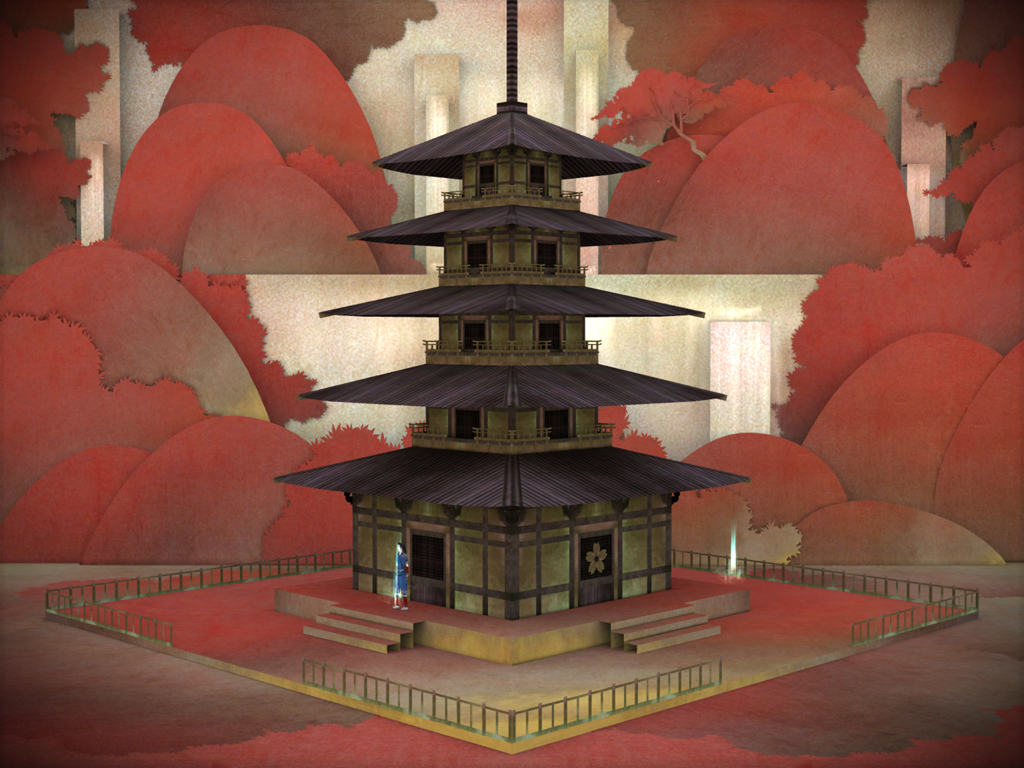 There's not much action in Tengami. Instead, it's about exploring the papery world, learning its rules so that you can solve puzzles. You control a tiny samurai, and double tapping anywhere on the screen will make him walk in that direction. There are no enemies to get in your way or timers to have to worry about. It almost feels as if indie hit Sword & Sworcery took place in a children’s story. As you move along certain points on the screen will glow white, which means you can interact with them — you'll be able to manipulate the pop-up book by pushing or pulling these points, which will cause the world to fold over on itself in different ways. Sometimes this will simply add a staircase so you can get to a previously unreachable area, other times it will take you to an entirely new section of the game.

"The way that it works is similar to a Lego kit."

The way these pop-ups feel is the highlight of Tengami — I found myself moving my fingers back and forth across the screen just to watch how the paper would unfold. Coupled with the wonderful art style, it really looks like an actual book. And that's because all of the effort that went into the underlying technology. Of the three years that the game has been in development, the first was spent simply figuring out how to make virtual paper fold in a way that's authentic. "The way that it works is similar to a Lego kit," says Schneidereit. "Instead of different Lego stones, you have different fold types." The game engine is able to figure out how these folds connect to each other, and then come up with the appropriate animation.

The team even claims that all of the pop-ups in the game can be recreated in real life — they went so far as to hire an artist to physically recreate certain scenes from the game. "We felt that the idea of a pop-up book game would especially suit a touch device," explains Schneidereit, "as it would allow the digital pop-ups to be similarly tactile as a their physical counterparts." 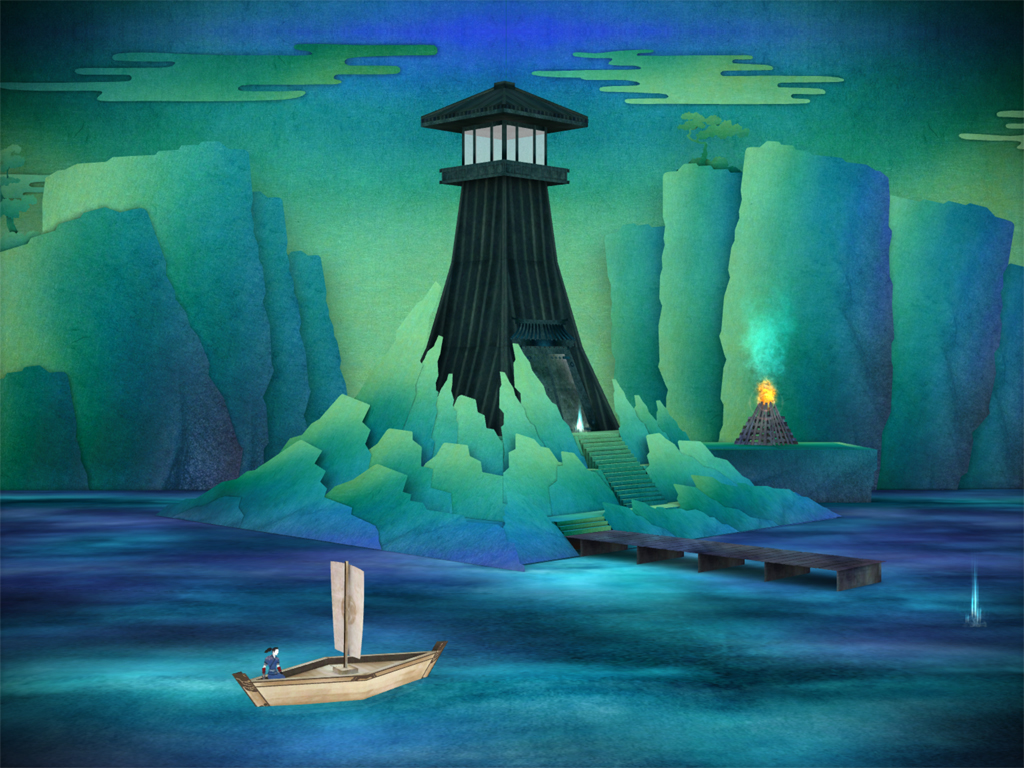 Tengami is far from the first game to use a papercraft aesthetic, but it differs from games like Tearaway with its slower paced, more contemplative tone. You aren't running around fighting enemies and jumping on platforms; you're painstakingly analyzing the environment, trying to find clues on how to proceed. There are lots of secrets hidden in the folds of Tengami's pop-up world.

A game that demands your full attention

The game also doesn't hold your hand — aside from highlighting the interactive elements, the game provides no hints at all. For the most part this system works well, and it feels really satisfying when you find a secret or solve a puzzle on your own. But it also means that there are moments of intense frustration. Some of the game's puzzles are very obtuse — I spent far too much time staring at a pagoda covered in eight bells with no idea of what to do. I ultimately stumbled on the solution by accident, tapping away at the screen in frustration.

Its wonderful presentation, simple controls, and easy-to-understand pop-up mechanics make Tengami a game that seems instantly approachable. But it's also a game that demands your full attention — missing a tiny detail can leave you stuck for long periods of time. Those bouts of frustration are worth it, though, because of Tengami's intricately detailed world. The simple joy of opening up a new area just by sliding your finger never gets old, and the serene soundtrack and lush visuals really make you want to delve further into the experience. It's like a really good book that you can't put down — even when it gets a bit annoying.

Tengami is available on iOS for $4.99 today, and is due to launch on Wii U, Windows, and Mac later this year.