There’s no room for a BlackBerry in the boardroom anymore. And that old, thick, has-to-be-plugged-in-or-it'll-die-in-three-minutes PC and external mouse on the desk in front of you? That has to go too. What you, self-respecting businessman that you are, need instead is something small and light so you can work from anywhere. The coffee shop is the office now, remember? You need something that's always connected, that works just as well when you're giving the big presentation or kicking back on the flight home.

So what does this new thing look like? Samsung thinks it's a lot like the Galaxy Note Pro, a 12.2-inch tablet running Android and made explicitly for you, the business professional. It costs at least $749.99, and it's not made to sit somewhere in between your phone and your laptop. It's meant to replace your laptop, or at least to let you leave it at home when you're on business trips.

Who's ready to give up their laptop, their keyboard and trackpad and Windows apps, and live the tablet life? Show of hands.

If you've owned or touched a Samsung device in the last several years, there's nothing surprising about the Note Pro. It's as if someone stood in a lab in South Korea, grabbed the edges of the Galaxy Note 3, and stretched. And then kept stretching: the resulting slate is 1.6 pounds, 11.6 inches wide and 8 inches tall, and it's one of the largest tablets I've ever held. (The Toshiba Excite 13 still holds the title, barely.) It's remarkably thin, though, at just 8 millimeters. It's made of Samsung's traditional plastic, in blue or white, with a chromed edge that looks metallic but feels as cheap as it is. Mercifully, though, Samsung has continued to eschew its glossy, greasy back for a faux-stitched faux-leather covering that sounds like a terrible idea, but looks okay and feels great. Samsung never used to pay attention to how your fingers feel as they rest on the underside of the tablet, and this change makes a huge difference. 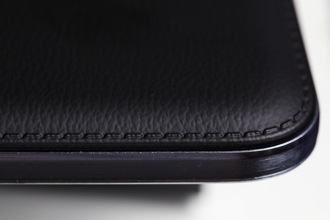 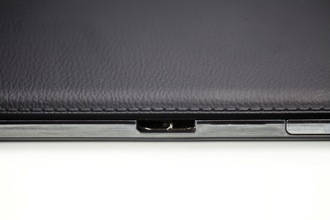 The Note Pro is meant to be used in exactly one way: landscape mode. Reading in portrait looks ridiculous, and the device starts to tip out of my hands as soon as I grip it from the bottom. The physical home button sits on the bottom as I hold it in landscape, flanked by multitasking and back keys; the loud stereo speakers blast audio from both sides; and the camera actually faces me and not somewhere over my right shoulder. It's meant to be used flat on a desk, too, or cradled by your elbow, since it's virtually impossible to hold in one hand and only slightly more stable in two.

Its sheer size makes it a great way to show something to a co-worker or client, but too big for almost anything else. I often lie in bed, on my back with a tablet held above my face while I watch TV shows before going to sleep. The Note Pro all but blocked my entire vision, was so bright it left me seeing spots, and tired my arms out pretty quickly. Playing Asphalt 8: Airborne gave me a headache, the frenetic game jittering so large so close. It's essentially like holding a television two feet in front of my face.

The screen itself is quite good, a 12.2-inch, 2560 x 1600 panel with great colors and viewing angles. But I can't help wondering if Samsung could or should have done better. The Note 10.1 has the same resolution in a smaller display, and side by side with the Pro is noticeably sharper. The Pro is so designed around its screen, and its best features improve with every available pixel, that something even higher-res would have helped make the Pro worth its $749.99 sticker price. As it is, bigger doesn’t add anything: you're getting larger icons and bigger text, not more pixels to work with.

And above all, that’s what Samsung's trying to do with the Note Pro: give businesses something to work with. 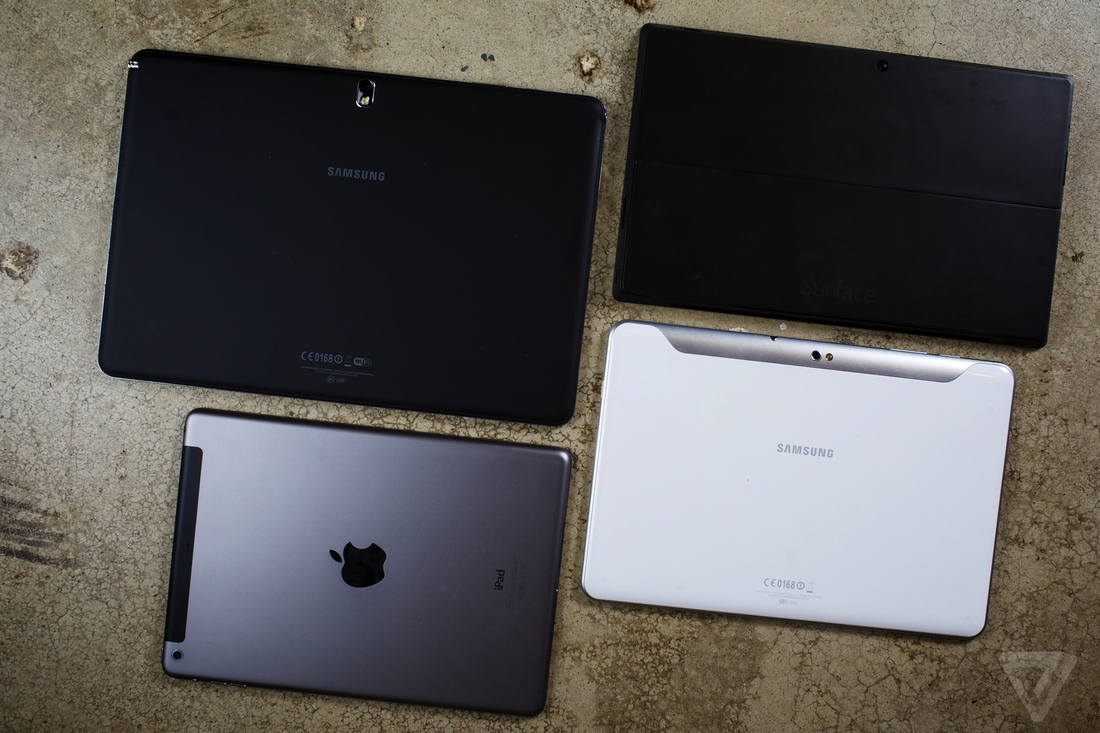 Out with the laptop

It's no coincidence that Microsoft's Surface commercials all take place at work, even the ones with the most dance-fighting. The bread and butter of the PC industry has always been IT departments and commercial buyers. And if tablets are here to kill the PC, it stands to reason that executives like you, currently carrying ThinkPads and external mice to class, might soon be slotting tablets into your leather briefcases instead. And Samsung wants a piece: instead of sitting in business class with your glasses perched on your nose squinting at your laptop, Samsung thinks you ought to be staring at the gleamingly huge display on a Note Pro instead.

Everything about the Note Pro, hardware and software, was made with business in mind

The Note Pro runs a heavily customized version of Android 4.4 KitKat, with Samsung's blooping and rippling TouchWiz UI all over it. (It's so heavily skinned, and in spots done so garishly, that the Note Pro is reportedly the device that caused Google to tell Samsung to scale back its efforts.) Nearly every change is supposed to make it easier to find information and move between apps. Samsung's Magazine UX lives a swipe away from the home screen, providing Flipboard-powered news and widgets for things like stocks and email; it's a bit like Windows 8's Live Tiles, though even Android’s standard widgets provide better access to apps and documents. And on a screen this big, the Magazine UX looks crazy and huge and utterly unlike anything Google intended for Android. 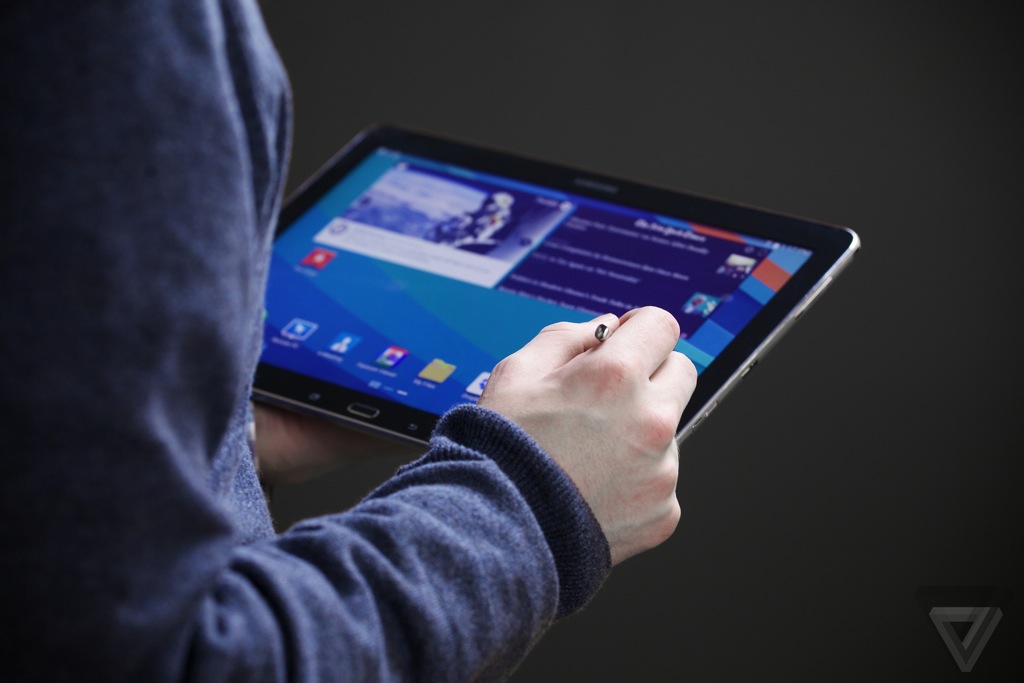 Samsung's clearest nod toward the business user is the set of apps that comes preinstalled. There's e-Meeting, which lets you share a virtual whiteboard with everyone in the meeting (assuming your entire company switches to Note Pros). Cisco's WebEx app is standard conference-call fare, and Hancom Office is a relatively solid replacement for Word and PowerPoint. There's even a Bloomberg BusinessWeek app, in case Samsung wasn't clear already.

Everything the Note Pro does, others do better 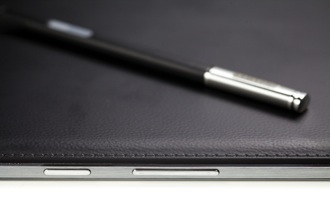 For a few people, that might be a relatively complete set of tools. Reviewing Office documents, dialing into the daily conference call, showing client presentations, answering emails — it's all pretty easy. But it's all easier on a laptop, or Microsoft's Surface Pro 2, and those two devices offer much more as well.

With the Surface Pro comes actual Microsoft Office, plus compatibility with all of the many Windows apps most of your companies still rely on. Same goes for a laptop, plus you get a far better typing experience than the Note Pro's hideous on-screen keyboard. The real difference, though, is multitasking: Windows and OS X have it, and Samsung's only trying to approximate it.

The Note Pro lets you open up to four apps at once on the huge display, and move pictures and text between them; I spent a lot of time with a browser open in one half, a YouTube video playing in the top left corner, and a blank document in the bottom for taking notes. Moving things around is really slow and awkward, though, and the list of apps you can use is quite small. Back on my Surface Pro or my MacBook Air, I can freely resize as many windows as I want, and stick Evernote next to Rdio next to Chrome as I work. The Note Pro can't do that. 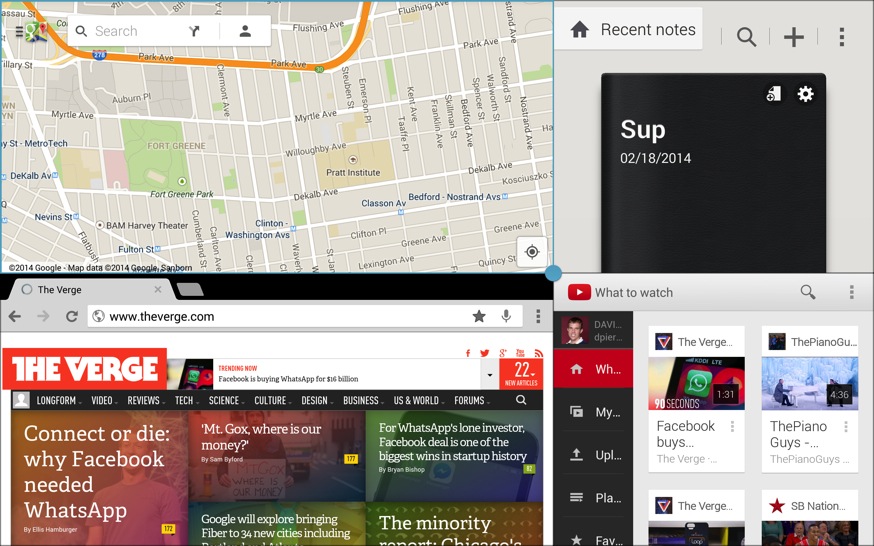 The S Pen is great, but for what? 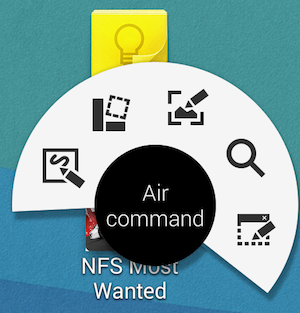 Samsung understands well what it's trying to be and the user it's trying to sell to, but it's held back by Android's diffuse and fragmented nature. The S Pen is another perfect example: the tiny stylus is responsive and useful, there's just not that much you can do with it. When you pull it out of its sheath in the top corner of the Note Pro, the Air Command menu appears: it lets you draw a rectangle on the screen to open an app in that space, or take a quick screenshot and write on it. It's great for taking quick notes, or showing someone what you love and hate about the latest design mocks (though the Note 10.1, with its denser display, is even more accurate).

Most apps, though, even most drawing apps other than Photoshop Touch, don't support the S Pen as more than just a replacement for your finger. That left me mostly stuck writing and drawing with Samsung's Action Memo and S Note apps. If your companies use something else, you'll spend a lot of time moving documents in and out of a half-dozen different apps to get things done.

The Note Pro is powered by Samsung's latest Exynos processor and 3GB of RAM, and mostly does its job fine, but it still runs into occasional problems. As is all too common with Samsung's tablets, it has a habit of stuttering as apps open or close, and for taking two beats too long to do some things. But the problems aren't crippling, or even annoying save for the gigantic delay in resizing the multitasking window. The Note Pro isn't overwhelmingly fast or impressive, but it's not slow.

It is remarkably long-lasting: I used the Note Pro almost constantly for three days before having to charge its 9,500mAh battery, and it took a full day of streaming video to kill it. It takes several hours to charge, far longer without the included USB 3.0 cable, but I can't imagine needing to plug it in often. 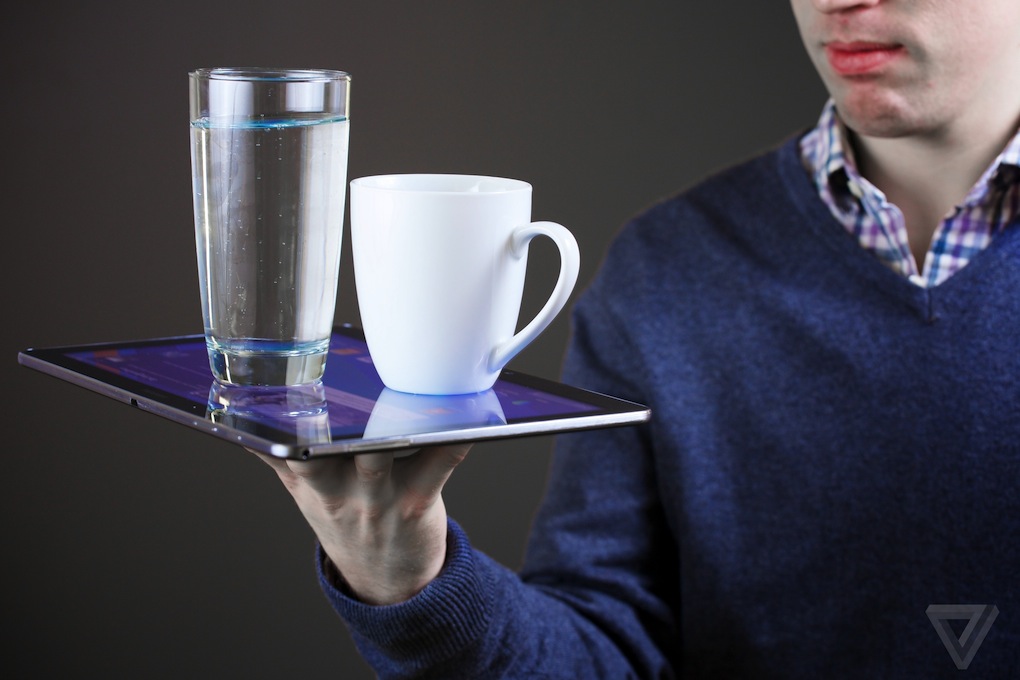 There's no replacing the laptop yet

Samsung's right about a lot of things. Business is both more mobile and more interconnected than it ever used to be, and that means it's time to rethink how we work. We need devices that travel well, that work the long hours we do, and that can handle the many pressures coming from all sides.

But neither Samsung nor Google can account for all the apps we use, all the ways we do business, all our particular idiosyncratic workspaces. Windows doesn't still dominate the workplace out of sheer inertia, but rather because it is endlessly pliable to almost anyone's needs. If you can read down the Galaxy Note Pro's feature list and see everything you need, and you can swallow the astronomical $749.99 price, then go for it. It's as productive an Android tablet as I've ever seen, though there are better options for almost everything it does. The iPad Air is cheaper and has more apps, even those for business; the Nokia Lumia 2520 is cheaper and always connected. And for getting work done on a tablet, nothing competes with Office, Windows, and the Surface Pro.

Here's the real truth, though: laptops aren't dead yet. They're getting thinner and faster and more versatile, and they come from a work-first world that no tablet can touch yet. Maybe someday we'll all be tapping on touchscreens in the conference room, and passing memos with NFC instead of over email. Maybe we won’t need more than 32GB of storage. And maybe that will all be better. But we're not there yet.

Until we are, go buy a laptop. And if you want a tablet, save your money and buy one that won’t break your arms when you’re watching movies in bed.