The president of an online newspaper in South Korea allegedly ordered editors to take down an article about the anti-Samsung film Another Promise, then sent apologetic text messages intended for Samsung executives who had apparently complained about the paper’s coverage. But the texts from NewDaily Biz’s president, Park Jung-kyu, were accidentally sent to journalists at fellow South Korean publication Pressian, which then published them with names redacted. The texts suggest that NewDaily Biz killed the article about Another Promise under pressure from Samsung. Samsung denies pressuring the publication.

The article, which was posted on February 5th, reported that celebrities were spending their own money to fund screenings of the film. Another Promise is a fictionalized portrait of Hwang Sang-ki, whose 23-year-old daughter died from acute leukemia in 2007. Hwang Yu-mi fell ill after being exposed to hazardous chemicals at a Samsung plant in Suwon, one of scores of workers who have fallen ill globally after working in semiconductor plants. A Seoul administrative court sided with Hwang’s father in 2011, saying there was a high probability that the leukemia resulted from her exposure to hazardous chemicals.

Details of the film's story were altered to avoid legal action

In Another Promise, the company where Hwang Yu-mi works is called "Jinsung." Filmmakers told The Guardian that they altered certain details about the film to avoid legal action from Samsung. The film, which was released in South Korea on February 6th, gained attention for being the first Korean movie to be funded entirely by private donations and crowdfunding.

Those donations were driven in part by growing concerns about working conditions for employees of semiconductor manufacturers. An activist group, Supporters for the Health and Rights of People in the Semiconductor Industry, told The Guardian that 200 employees of chipmakers have fallen ill after extended exposure to chemicals. But few have successfully won workers compensation.

Meanwhile, the company has suffered a series of toxic gas leaks and acid leakages at its Korean plants. The leak left one worker dead and four others injured. 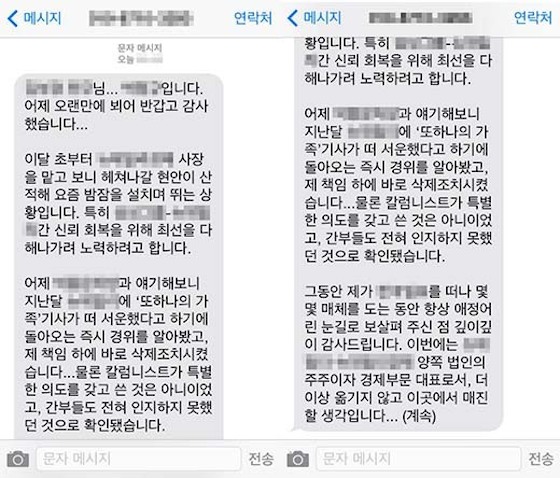 In the texts intended for Samsung, Park said he has had trouble sleeping and managing his workload since becoming president of NewDaily Biz earlier in the month. Per standard journalistic practice in Korea, Pressian censored the names in the original report, including the name of NewDaily Biz. The full details were published later in an article by the Korean publication Mediatoday. "To fix the trust issue between Samsung Group and NewDaily, I plan to do my best," Park wrote in Korean. "I spoke with Park Jong-moon, who told me that Samsung was upset about the Another Promise article we published last month. After looking into the details, I have directly ordered to take the post down. The columnist didn’t have any ill intent, and the senior managers didn’t notice it at all."

Questioned about the texts by journalists from Pressian, Park said the article was removed on February 18th because it was a "double post" that repeated information from a previous article. He subsequently denied that Samsung pressured him.

Samsung wields heavy influence in Korea, and local media have long resisted writing articles that put the conglomerate in a negative light. When a book critical of Samsung chairman Lee Kun-hee appeared in 2010, most mainstream outlets refused to write about it. Park’s texts show the lengths to which Korean publications will go to preserve good relations with the corporate giant — and suggest how aggressive Samsung is about managing its image in the local media.

Update: After this article was published, Samsung issued the following response reprinted in full below:

We categorically deny any allegation that Samsung tries to exert influence over media coverage, including of this movie. The fact is that the movie has already been widely covered by domestic and global media since before its release in early February. The allegation concerning the article in question is clearly groundless.

Hyunhu Jang contributed to this report.