English author and Guardian columnist George Monbiot has accused Discovery Channel of faking a photograph of a long-extinct shark for a dramatized documentary called Megalodon: The Monster Shark Lives. After noticing that the sepia-toned "photograph" of a shark above bore all the signs of a hoax, Monbiot reached out to the internet, promising a signed copy of his new book to anyone that could prove Discovery had broadcast a fake image.

After multiple readers started to investigate, the truth was revealed to Monbiot. The photograph in question, which purports to show a 64-foot long Megalodon shark swimming behind Nazi U-boats near Cape Town, South Africa, is actually a frame from archival footage of U-boats shot in the Atlantic. Examining the video, it's clear that a sepia filter, Nazi watermark, and, more importantly, a shark that has been extinct for around 2 million years, have been added to the frame. 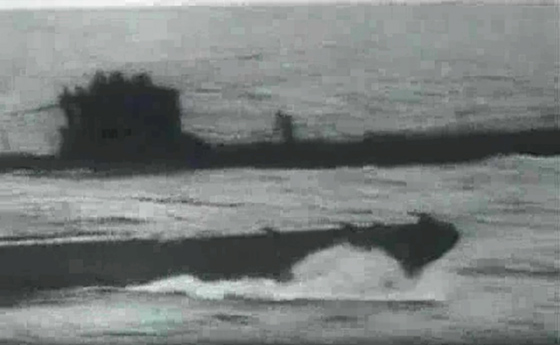 A frame from the video Monbiot believes the "photo" came from.

While Monbiot is unable to prove that Discovery's production company Pilgrim Studios faked the images, the fact that no such image was discoverable implies, at the very least, sloppy research from the company. Monbiot says he has reached out Discovery's PR, putting it to them that "Pilgrim Studios doctored the image and misled the audience." At the time of writing, he has yet to hear back.