Imagine an encounter with something truly alien

Solaris begins with a simple, evocative setup. Three scientists studying an alien planet begin receiving unwelcome "visitors" — apparently human figures from the long-dead past, returned to haunt the living. They appear (and reappear) while the scientists sleep, as though dragged into the waking light from the deepest recesses of their subconscious guilt, dread, and regret. Sent to investigate, psychologist Kris Kelvin awakens next to his wife, who’d killed herself 10 years earlier. Is she "real"? How did she arrive at the space station? And how is she connected to the ocean planet, Solaris?

For Stanislaw Lem, author of the original 1961 novel, this setting provided an opportunity to critique one of science fiction’s most treasured tropes: the "first contact" with alien life. Writing in Poland under Communism, Lem considered American sci-fi shallow and pretentious; consisting mostly of Space Westerns aimed at adolescents, it failed to address deep philosophical or scientific ideas. (With Philip K. Dick a notable exception — Lem dubbed him "a visionary among the charlatans.")

How would human beings react to a life-form so foreign as to be beyond comprehension?

In American sci-fi, the aliens were always weird, but recognizable as either allies or enemies. Lem wanted to imagine an encounter with something truly alien. How would human beings react to a life-form so foreign as to be beyond comprehension? He imagined a planet-wide sentient ocean so frustratingly non-communicative that scientists would spend their lives trying to unlock its secrets. They’d produce quasi-religious speculations about the "cosmic yogi" or the "oceanic idiot," revere it as an ascended mind or denounce it as childish, prehuman in its development. They’d devote Talmudic attention to reading its roiling forms; they’d lose themselves in its waves. Finally, they’d try to get its attention. And when that attention came, it would be like nothing they could have predicted.

Lem’s Solaris is a genre-busting book, a novel of ideas less interested in debating those ideas than in cataloging them. Skewering academic specialization, Lem describes the fat volumes produced by generations of Solarists, from the first-generation swashbuckling adventurers to the careerist, specialized researchers who followed. Theories bloomed. A bureaucracy arose to discipline and circumscribe the realm of respectable speculation by awarding study grants. Popular opinion moved with the tides of scientific hypotheses.

Space exploration is not about fathoming the universe, but imposing our own all-too-human will upon it

Wedged between the tomes is a pamphlet, whose author boldly declared there never could be human "contact" with a nonhuman civilization. While the protagonist calls that argument a "satire against the entire species," it’s essentially Lem’s point: space exploration is not about fathoming the universe, but imposing our own all-too-human will upon it. As one scientist remarks, "We have no need of other worlds. We need mirrors. We don’t know what to do with other worlds. One world is enough, even there we feel stifled." Mankind gazes into the unknown and sees his own face reflected back, either idealized or rendered primitive. No wonder that when the sentient ocean finally makes "contact," it does so through the most powerful, most awful memories — it becomes the scientists’ black mirror. "We have it, this contact!" one of them exclaims. "Our own monstrous ugliness, our own buffoonery and shame, magnified as if it was under a microscope!" You can practically hear the mad cackling.

When the Russian film master Andrei Tarkovsky adapted Solaris, he jettisoned almost all of Lem’s philosophizing. (Like Stanley Kubrick, whose 2001: A Space Odyssey he considered cold and sterile, Tarkovsky took a cavalier attitude toward rendering the work of others.) In some ways, his film is richer for it: where Lem executed a thought experiment about alien contact, Tarkovsky moves the focus away from the ocean planet and onto the people overcome in its wake. Most of the characters remain sketchy in Lem’s depiction, but Tarkovsky gives them personalities and human histories.

By turning his camera away from the planet, Tarkovsky examines a different kind of mirror. Kelvin’s deceased wife, Hari, reappears on the space station — but she’s only Hari the way he remembers her. Assembled by the ocean from moments of Kelvin’s memory, she has no inner life of her own. Initially horrified by her return, Kelvin comes to love her again, but his love is born of guilt over their shared past. She, meanwhile, begins to realize that she’s not "real." Despite Kelvin’s protests, she cannot see herself as fully human. She’s a shallow mirror for Kelvin’s feelings about her, familiar in appearance and yet foreign and distant as an alien planet. 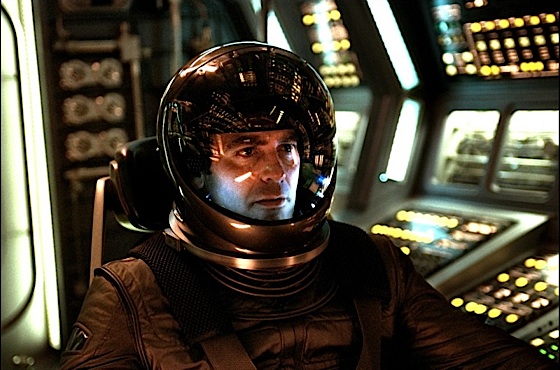 Tarkovsky’s 166-minute Solaris became an art-house classic, a meditation on grief and alienation that just happened to be set on a space station. Stephen Soderbergh’s underrated 2002 adaptation, despite the director’s claim to have returned to the themes of Lem’s novel, is even more grief-stricken, featuring a morose George Clooney as Kelvin. Yet where Tarkovsky’s film is expansive and atmospheric, Soderbergh’s is elliptical and atmospheric, running just 99 minutes. It’s dreamlike and suggestive, to the point where late-stage plot developments seem like an attempt to make something happen.

Lem, of course, hated both adaptations. Or at least the idea of them, since he’d seen only pieces of Tarkovsky’s and none of Soderbergh’s. "I only wanted to create a vision of a human encounter with something that certainly exists, in a mighty manner perhaps, but cannot be reduced to human concepts, ideas or images," he wrote. "This is why the book was entitled Solaris and not Love in Outer Space."

Luckily, as readers and viewers we don’t have to be so dismissive. There’s room in the universe for all three interpretations of Solaris (oh, and a Russian made-for-TV miniseries). From Lem’s philosophical novel, to Tarkovsky’s filmic rumination on morality and "progress," to Soderbergh’s beautifully rendered world of grief and loss, each makes its own unique claim to classic status.

The Classics: cultural artifacts for the new millennium