Share All sharing options for: Books take a back seat in this proposal to redesign Washington DC's historic library

Libraries haven't been just about books in a long time. They've developed into research spaces, safe places for kids, and casual meeting spots, but the current design of most libraries doesn't make this kind of interaction easy. Washington DC is one city hoping to change this: it just announced the winning proposal to renovate the Martin Luther King, Jr. Memorial Library — and it's an ambitious one. The design is a a joint pitch from Dutch firm Mecanoo Architecten and DC's own Martinez+Johnson Architecture and it wants to modernize the library's classic Mies van der Rohe style while turning it into a multifunctional environment. 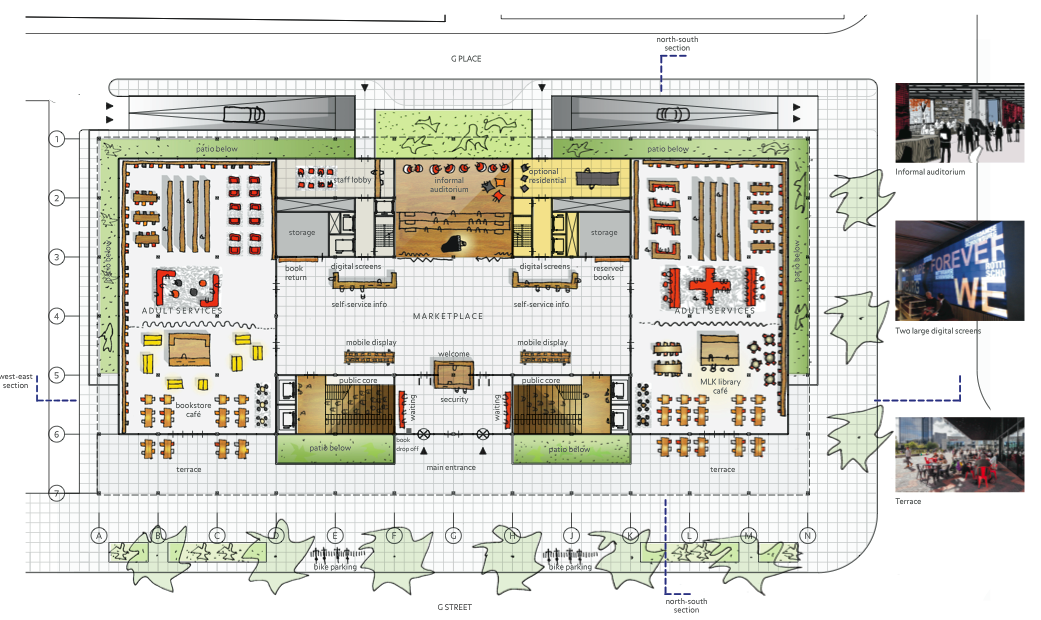 Keeping Mies' horizontal aesthetic as the core structure, the proposal designs each floor with a specific purpose. The basement is the "Innovation Room," outfitted with movable acoustic walls, stages for debates and lectures, and a lot of storage space. The ground level will be divided into two cores with informal auditorium space, a special area for the newest releases and library information, as well as a bookstore and a cafe. The higher floors have more defined purposes: an education floor with children's and teens' hubs as well as a space for watching videos and gaming; a reading floor which has the most traditional "library" kind of atmosphere with bookshelves, desks, tables, and lots of seating; a history floor for special collections and archives; and finally, a rooftop deck and garden space.

Can a new library experience exist in an old building?

It's an inspired design that, instead of simply razing the building and starting from scratch, attempts to make something new out of the existing structure. This preserves the site's historic value, but even so, it comes with controversy. The proposal also wants to turn the library into a mixed private-public space, possibly with housing units at the very top of the building. Some don't want any private involvement at all, but having a healthy amount could help administrators maintain the building more easily.

There's also, of course, the issue of funding: currently Washington, DC Mayor Vincent Gray only committed $103 million to the project, and the price tag could be as high as $250 million. If DC wants this project completed at all, its residents will likely have to compromise on a private-public collaboration to get the necessary funding.