All LTE isn't equal, but US carriers are a raw deal

Wireless speed doesn’t come cheap for Americans and Japanese, who pay through the nose for wireless service in exchange for some of the worst-performing LTE networks in the world. That’s the takeaway of new data from Ookla, which gathered performance stats worldwide using its Android and iOS Speedtest.net apps. Whereas US carriers, on average, offered disappointing 13.2 megabit per second (Mbps) download speeds on LTE over the course of 2013, carriers in countries like Australia, Canada, and the UK delivered speeds nearly two to three times faster. In fact, out of the 40 countries and territories with the most LTE tests in 2013, the US offered slower speeds than all of them, with the exception of Puerto Rico, the Philippines, and India. Japan didn’t fare much better, just one slot faster than the US.

But it’s the cost that makes these speeds particularly painful to swallow. On average, Verizon charged roughly $4.05 per Mbps of LTE download speed in 2013, compared to just $2.25 for UK carrier EE. Of all the major international carriers we compared, every one of them except Japan’s NTT Docomo were about half as expensive as Verizon. While we only compared the largest carriers in some key countries for this report, Verizon isn’t the only carrier in the US where speed comes at a premium: AT&T comes to $3.93, while Sprint — with its nascent and slow LTE network — averages to a whopping $7.50 per Mbps. 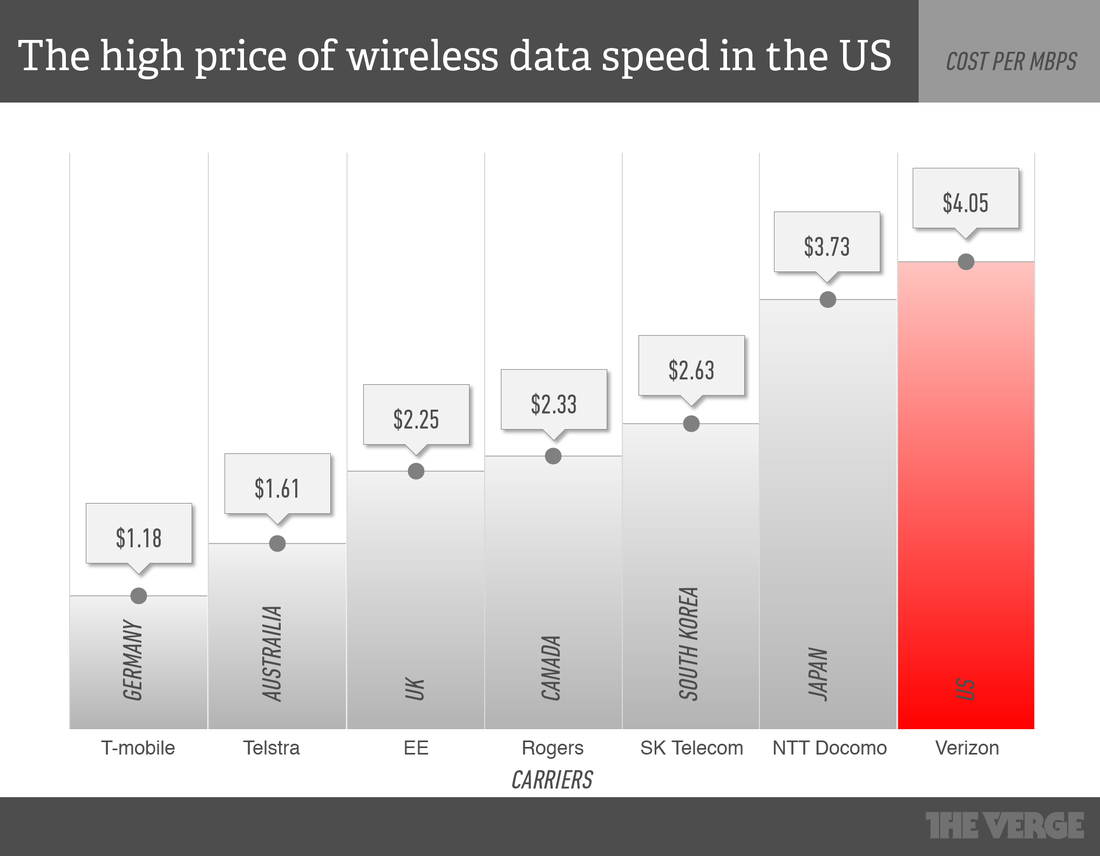 The amount of money (adjusted for US dollars) that wireless subscribers in different countries pay for every megabit per second of download speed. Calculated using 2013 speed data provided by Ookla.

The question was, just how much LTE do the world’s smartphone users get for their dollar (or yen, won, or pound)? To show just how much American consumers pay for their high-speed wireless data compared to smartphone users abroad, we calculated the average cost per Mbps of LTE download speed for some of the largest carriers around the world. Ookla’s latest LTE data gives a telling look into the world’s network speeds, which we divided by each carrier’s self-reported average revenue per user (ARPU). ARPU is a key metric used by carriers to show investors how much revenue they collect, on average, from each of their subscribers. When available, we used the ARPU specifically for postpaid accounts.

Of course, it’s not as simple as US carriers gouging their customers for data service. Not all networks are made equal. The US has a relatively large population spread over a massive surface area, and Americans typically use far more data than their peers abroad. According to one report, US subscribers used an average of 1.2GB per month in 2013, compared to 240MB per month globally. LTE networks like Verizon’s and AT&T’s are also older than many others, and these networks typically slow down over time as they "load up" by taking on more subscribers that switch over to LTE-capable devices. Similar data from speed test app OpenSignal out this week shows this aging process in action: the US is one of the only countries where LTE networks were slower in 2013 compared to 2012. There are other factors at play as well, like spectrum availability in different countries.

"The US has always taken a pretty hands-off approach to mobile regulation."

It’s also important to note the difficulty of getting reliable data about mobile networks around the world. Jackdaw Research analyst Jan Dawson tells The Verge that there’s a "fundamental challenge" with data from companies like OpenSignal and Ookla, which gather information from their speed-test apps. Since users themselves choose when and where to test their speeds — typically when performance is abnormally good or bad — Dawson says these tests lack the "scientific rigor" offered by data collected by professional research firms. And when it comes to performance, download speeds aren’t all that matters. Coverage, latency, and upload speeds are also an important part of the equation. But Ookla, for its part, is tapping into a truly massive sample size: it averaged over 35 million separate LTE tests for the data it provided to The Verge.

But the performance gap is still there, and it’s only made worse by the high prices in the US. As Dawson notes, "the US has always taken a pretty hands-off approach to mobile regulation." Especially compared to Europe, there's far less meaningful competition due to in large part to the technological differences between major carriers — a hard lock that prevents the free flow of customers between AT&T and Verizon, T-Mobile and Sprint. Barring a heavy regulatory touch from the FCC that we simply haven’t seen in the wireless age, don’t expect the situation to change any time soon.

Chris Ziegler contributed to this report. Illustrations by Dylan Lathrop.