Microsoft is at Mobile World Congress today, and the company is announcing its first significant update to Windows 8.1. Microsoft's Joe Belfiore, who is now responsible for phones, tablets, and PCs at the software maker, revealed the update is coming "this spring" and is largely focused at improving the experience for mouse and keyboard users. Several leaks of an update, known as "Update 1," have shown these particular changes several times, and Belfiore is confirming that the update will include improvements like a title bar at the top of modern apps, and power / search buttons on the Windows 8.1 Start Screen.

Targeted at mouse and keyboard users

Microsoft says there will be "easy" launching and switching of apps via the Windows 8.1 taskbar, alongside new mouse UI for right-click and closing apps. It's clear this is largely designed for mouse and keyboard users, and Belfiore admits Microsoft has heard the complaints. "Some of those touch affordances weren’t really tuned as well as we could do for those mouse and keyboard users," says Belfiore. "We found people weren’t aware of where they should look in the UI. Those are the things we’ve really started to improve for this update coming this spring."

The spring update for Windows 8.1 will also allow OEMs to lower their specifications for devices. Belfiore says PC makers will be able to use just 1GB of RAM and 16GB of storage in future Windows 8.1 devices, a change that will help bring lower price points. It's likely that these updates to Windows 8.1 are linked to recent OEM changes to lower license costs. A recent report suggests that Microsoft is lowering the cost of Windows 8.1 licenses by 70 percent for PC makers, specifically only for machines that retail under $250. Any hardware specification changes will obviously assist with that.

Microsoft isn't naming the update today, but internally it's known as "Update 1" for Windows 8.1. Microsoft also isn't announcing exactly when the update will become available, but the company is largely expected to detail it fully at an upcoming Build developer event in April before releasing it early that month. 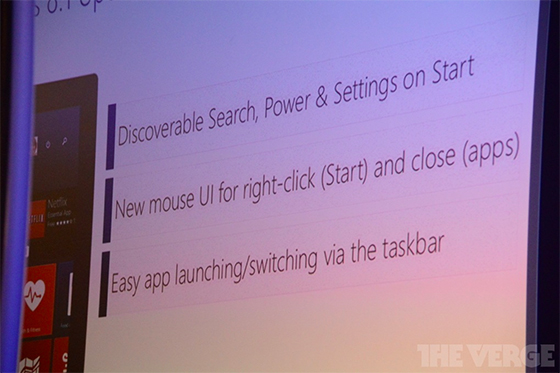