While Microsoft is only saying spring for this Windows Phone update, Belfiore also took some time to reveal some of the changes the company is working on. Microsoft will support on-screen buttons with Windows Phone 8.1, alongside new hardware support for Snapdragon 200, 400, and 400 LTE chipsets. Both changes will allow Windows Phone makers to build cheaper devices, but also handsets without the three physical buttons that all existing devices use today. Belfiore says the changes are designed to "help us get more and more momentum," while allowing phone makers to reuse their existing Android handsets. Microsoft's spring update for Windows Phone will also include support for apps to be stored on microSD cards, allowing phone makers to ship handsets with just 512MB of memory and 4GB of storage. 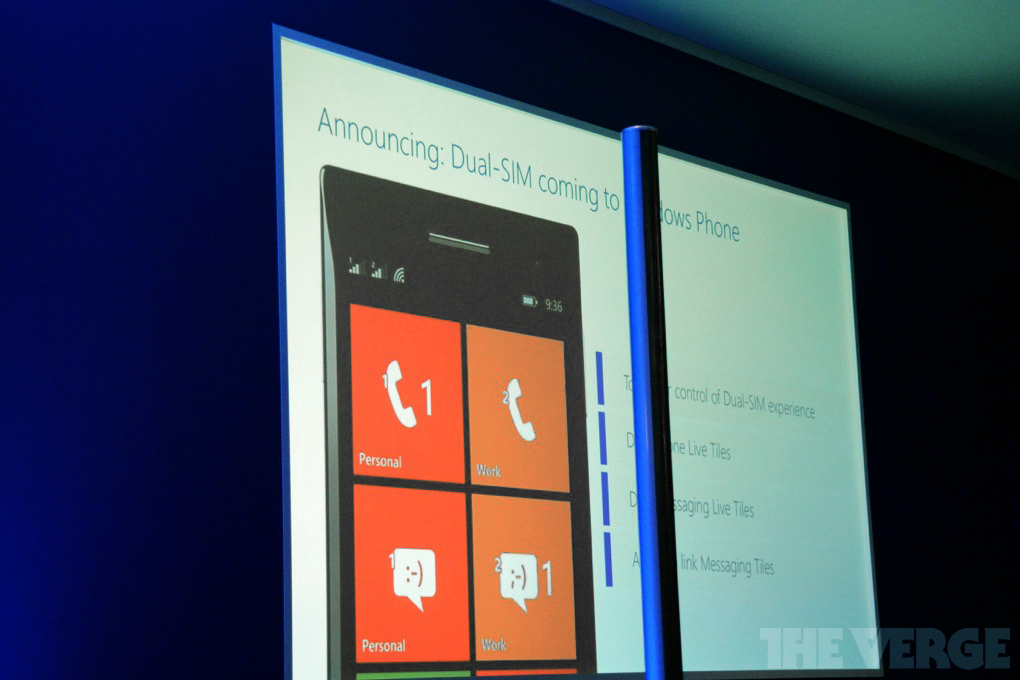 Another significant change to Windows Phone 8.1 is the inclusion of dual-SIM support. Microsoft says there will be "total user control" of the dual-SIM experience, with Live Tiles for each SIM on Windows Phone 8.1 and the ability to link those in the user interface. While dual-SIM support isn’t widely used in high-end smartphones today, Microsoft appears to be targeting emerging markets and countries where dual-SIM is key. Alongside the dual-SIM announcement, Microsoft also revealed a new OEM initiative designed to stimulate a wider range of hardware for Windows Phone. Microsoft is helping smaller manufacturers, stores, and operators create white-label Windows Phone devices with low specifications and low prices via a web-based hardware partner portal. This is typically an area dominated by Android, so it’s another clear example of Microsoft targeting the low-end in an effort to boost Windows Phone sales.

Aside from hardware changes, Microsoft briefly announced new hardware partners for Windows Phone today. Foxconn, HTC, Huawei, ISR, Karbonn, Lenovo, LG, Longcheer, Nokia, Samsung, ZTE, and Xolo will all produce devices, but it's not clear exactly when any future handsets will come to market. Nick Parker, head of Microsoft's OEM work, says it will be up to phone makers to announce any future hardware, noting "we’re not going to announce any new hardware today."

Microsoft isn't detailing a lot more about Windows Phone 8.1, or even its name today. The company is largely focusing on some of its hardware changes before planning a full unveil of the features and changes at its Build developer conference in April.