EVE, offline: how do you archive a universe?

EVE, offline: how do you archive a universe?

Building an MMO time capsule at the Museum of Modern Art

The year is 2114, and somewhere, a researcher is about to visit a dead world. Turning on a computer, she metaphorically or literally dusts off a piece of software bearing the title "EVE in a Box." It launches, and her avatar appears in a space port 20,000 years into the future. But the station is deserted. She takes flight, navigating around a few automated ships. She is the only human being in the universe.

This is, anyhow, what archivists at New York’s Museum of Modern Art hope might happen. When the museum began acquiring video games for its design collection in 2013, futuristic massively multiplayer online title EVE Online was near the top of the list. A complex, time-consuming game that lets players compete anywhere from the marketplace to the battlefield, EVE isn’t remotely close to the largest MMO. But it’s one of the most interesting. Players construct complex alliances and participate in devastating space battles that can involve thousands of pilots from across the globe. Playing EVE can be like holding down a full-time job. And unlike many MMOs, every single player lives, fights, works, and dies in one persistent universe.

For the past year, EVE Online has been given pride of place at a MoMA exhibit, with an introductory video produced by Icelandic developer CCP. But now that its time on display has ended — Minecraft is featured in its place — museum archivists are looking for a way to preserve the world long after it’s fallen into disrepair online.

"It’s so much easier to work with living artists than with dead people."

Video games have a reputation as one of the most difficult things to archive. More so than film and text, they’re dependent on delicate and sometimes irreplaceable hardware or software platforms that became obsolete long ago. A certain controller or other peripheral may be vital to getting an "authentic" experience. And while many works benefit from some kind of cultural context, video games may be especially opaque to future audiences. You can explicitly fail at a game. You can see it in action and not understand the rules. Creating an emulated version of an old game can require tweaking how it behaves, going beyond the original source code even if the changes aren’t noticeable to players. Without an ancient, impossibly rare PDP-1 monitor, for example, you can create something that’s almost an exact copy of the classic Spacewar!, but you'll need to make adaptations for modern screens.

Nonetheless, games have one obvious advantage over masterworks of yore: there’s a good chance their creators are still alive. To MoMA design department supervisor Paul Galloway, this means archivists have a responsibility to pick their brains while it’s still possible. "We have this luxury of dealing with living designers and can call up somebody who worked at Atari in the ‘70s. And they remember what they were doing and can be an active participant," he says. "Places like MoMA can show 30- or 40-year-old games working still, but if those things break now, there are still people with existing expertise who can work on them. But that may not be the case in 20 years."

For EVE in a Box, MoMA is relying largely on the developers. The "boxed" game is basically a slice of CCP’s backup data — when you start the EVE client, it just points offline rather than online, and it can be run in a virtual machine as present-day computers become obsolete. In other words, there's no literal box, or at least there doesn't need to be. Ben Fino-Radin, who works as a conservator on the project, describes it as a lucky break for the museum. "This isn’t something that we built or we conceived of," he says. "CCP said ‘Hey, we do this thing.’ And we said ‘Yes, that’s brilliant. That’s perfect, actually.’" 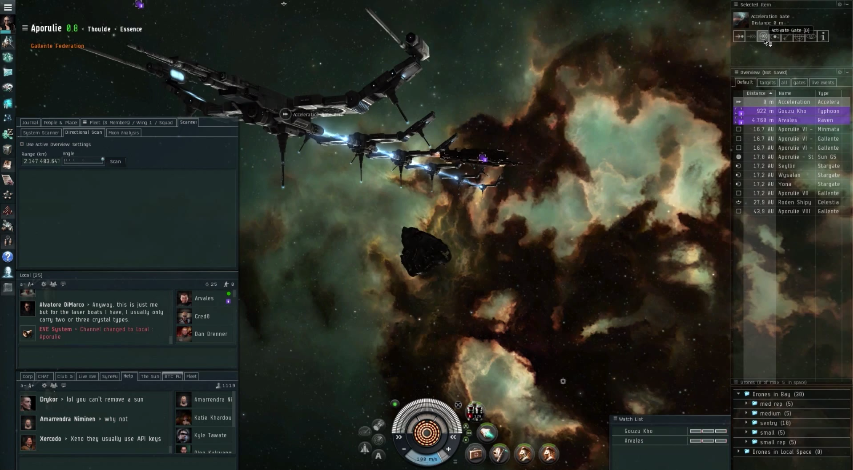 Compared to some other projects, preserving EVE’s environment is easy. Unfortunately, that environment will provide only an eerie echo of the real thing. Galloway’s description of EVE in a Box evokes buried archaeological treasures. "Indiana Jones could find the crate in a hundred years, open it up and theoretically open up the EVE universe," he says. But he and everyone else involved are quick to mention the catch: that the universe isn’t much good without its players. "It would essentially be that Indiana Jones character exploring a ghost town," says Fino-Radin.

CCP creative director Torfi Frans Ólafsson, who Fino-Radin has worked with, can recall his own time debugging an offline EVE. "It was one of the most lonely experiences that I’ve ever had," he says. "The entire game exists for you to be aware of people around you and communicate with people around you. When you have all this massive infrastructure, and all these great space stations and space lanes and planetary systems, and it’s just you, it’s a tremendously lonely and post-apocalyptic experience."

In theory, subscribers’ avatar data and communications could have been imported to give a greater sense of the world, even if their characters wouldn’t be doing anything. The legal problems with this, though, are tremendous. Ólafsson pointedly compares importing people’s chats and other interactions to "AT&T creating a piece for a museum, and taking everybody’s phone records and storing them there." Even if they somehow got every player’s consent, though, there’s simply no technical way to let people in the future play the game as it exists now.

"It was one of the most lonely experiences that I’ve ever had."

The difficulty of capturing ephemeral moments is felt deeply in video game archival work. "Preserving Virtual Worlds," a landmark paper and project in the field, uses the example of virtual candlelight vigils held in Asheron’s Call and Everquest after the September 11th attacks. One version of a single-player game can stay more or less the same over the years, but these moments were as fleeting as their real-world counterparts — and unlike those, there are no physical relics left behind. If EVE Online somehow manages to keep running into the next century, it won’t be the same game it was in 2013. Even going back 10 years is a struggle: in the early days, Ólafsson says, CCP had to overwrite older data to keep from running out of server space. Today, the company keeps a huge archive, of which MoMA currently has only a fragment. Fino-Radin says part of the museum’s archival work includes creating a way to manage different versions of software, so even if it’s only a limited set of snapshots, EVE in a Box could one day create a rough sketch of how the game evolved.

Since you can’t capture precisely what it’s like for players to inhabit EVE, the next best thing is to let future generations look over their shoulders. For the exhibit, CCP asked subscribers to upload recordings of their gameplay on a specific date, sorted through the resulting videos, and compiled an overview of one day in EVE Online. Fino-Radin hopes to build on that, capturing more detailed documentation of individual players and events. That could obviously include recordings of the screen, but creating a sense of physical place is also meaningful. Where did people play? What equipment did they use? What did they look like in the real world as they controlled avatars in the virtual one?

Ultimately, offline EVE will be a technical component to a larger history, a kind of substrate over which to overlay more meaningful context. CCP itself has taken a mass-media approach to oral history: last week, Dark Horse released the first issue of EVE: True Stories, a comic miniseries that dramatizes players’ retellings of the game’s most exciting moments. More stories could show up in a planned TV series developed by 2 Guns director Baltasar Kormakur.

Without CCP’s prompting, players already create some of the most valuable documentation, whether it’s a recorded gameplay video or a wiki — the massive Goonswarm alliance maintains a comprehensive guide for new players. No curator will know a game as well as someone who has dedicated large parts of their life to mastering and sharing it. But they can keep these artifacts from disappearing, and help present an inaccessible world to the general public: from the outside, gameplay in EVE Online often looks impenetrable or downright boring. Since its MoMA show, CCP has been contacted by other museums to work on similar projects; it’s currently in talks with them.

This historical preservation is described in lofty terms: Ólafsson offhandedly mentions both World War II and the civil rights movement when talking about strategies for documenting EVE Online. "We need historians or a good journalist to go back and figure out the story and the human angle," he says. Following this analogy, archived worlds like EVE in a Box become something like designated historic sites. Seeing a battlefield can make everything you already know about the battle more meaningful, but the field can’t play it back for you. Without memories, it’s just another patch of grass.

On the flip side, though, being able to actually walk that battlefield is invaluable for historians. "If somebody comes out in a hundred years and wants to research this early creation of a virtual world — if you think of this stuff in kind of increasingly dominating our lives and just imagine what it will be like in a hundred years — we’re looking at the genesis of that world," says Galloway. "But it’s only helpful if you’ve got some real, tangible quality of that culture available for people to see."