In his ‘Late Night’ debut, Seth Meyers is strong but plays it safe

In his ‘Late Night’ debut, Seth Meyers is strong but plays it safe

On March 3rd, 2009, a 34-year old Jimmy Fallon stepped out for his first show as host of NBC's Late Night, taking over for Conan O'Brien. Fallon, visibly nervous, paced left and right as he ran through a few jokes about Rush Limbaugh and New York weather, eventually jumping into the very first "Slow Jam the News" with Tariq Trotter (aka Black Thought) of The Roots.

The Fallon who ended his Late Night run (and subsequently took over The Tonight Show last week) is a different, more confident host — someone who found his voice over months and years of shows. It's important context to have when watching Late Night with Seth Meyers, which premieres tonight after Fallon.

So with all that said, how'd he do?

In his first show, Meyers, a 13-year veteran of Saturday Night Live and co-host of "Weekend Update," plays to his strengths of deadpan one-liners, his eyes focused intently to the camera and his feet planted firmly in place. Unsurprisingly, the monologue feels like a five-minute version of "Weekend Update." (One example joke: "A hunter in Tampa confused a man practicing turkey calls for a deer on Sunday and shot him twice in the arm. Well, it's like my grandpa always used to say, if it looks like a man and it talks like a turkey, it's a deer.")

"I'm gonna shake stuff up and open this thing with a monologue."

The first segments, like Fallon's "Thank You Notes" (which Meyers references in the cold open), are designed as vestibules for pattern-based punchlines. "Venn Diagrams" sets up two seemingly disparate sides ("Snow" and "Toilet Paper") before revealing the connection ("Things you won't find in Sochi"). But that's just one segment out of what assuredly will be dozens — some that'll end up as recurring fixtures, some that'll be quickly forgotten about. 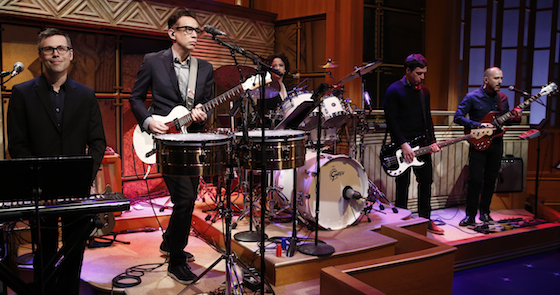 As a guest himself on Fallon's Late Night (see: "the passing of the pickle"), Meyers said that interviews would be the hardest part of the new show. "I'm worried about the interviewing," he said. "Obviously that's a thing you have to learn by doing." Meyers looked at ease and had a great banter with first guest Amy Poehler, who co-hosted "Weekend Update" with him from 2006 to 2008. His second guest, Vice President Joe Biden, proved to be charming and affable without much input needed from Meyers.

Backing up Meyers is The 8G Band, named after the NBC studio where Late Night is filmed and led by SNL-alum-turned-Portlandia-star Fred Armisen. His role is deeply understated here, arguably to a fault. Despite his background, Armisen really is just the band leader. There is little interaction between him and Meyers, aside from a couple of far-too-brief exchanges (one involving Poehler). That won't always be the case, thankfully — "I think eventually we'll see [some character] stuff from Fred," Meyers recently told The Hollywood Reporter. 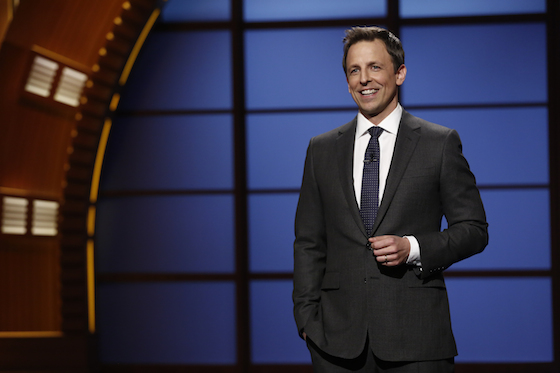 The late-night television format is an archway, the host its keystone

Meyers' version of Late Night isn't designed to reinvent the late-night television wheel. Monologue, segments, guests, and musical guest — repeat every weeknight. The format is an archway, the host its keystone. There are no large curtains, sure, but there is a band, a stage, and a desk — one adorned with a mug, an iPad Air, some trinkets, and the customary radio mic that never actually gets used.

Comparisons to other late-night hosts, especially his direct predecessor, are inevitable. Whereas Fallon started out playing it loose before finding his confidence, Meyers' path might follow an inverse trajectory. When he walks out from the large archway at the center of his new set, he'll have to learn to loosen up — to look away from the camera and play to the crowd.