Share All sharing options for: TiVo's co-founders are trying to bring the best internet video to your TV with Qplay

For years, companies have been trying to bring the internet into your living room, onto the biggest and best screen in your house — the TV. As internet video (and sites built around it like YouTube) have grown in prominence, that push has only increased, with set-top boxes like Apple TV and Roku, as well as Google’s Chromecast, trying to easily bring internet video to your TV. It's a problem that a new company, led by TiVo co-founders Mike Ramsay and Jim Barton, is attempting to solve with Qplay: a hardware / iPad app combination that’s meant to bring a more lean-back, TV-style browsing and watching experience to internet video.

The whole Qplay system is based on the concept of a Q (for readability, we're referring to them as queues). Qplay's queues are custom video playlists or channels that are always updated with new video from around the internet. Queues are typically organized around content: there are "what’s new" and "trending" queues but there are also ones organized around topics like comedy, news, sports, and so forth. Qplay’s algorithms are constantly looking for more content and adding them to these queues, so they’re always evolving and staying current. There’s also a custom queue that pulls from your Twitter, Facebook, and YouTube accounts to find videos from people or channels that you’re already interested in. 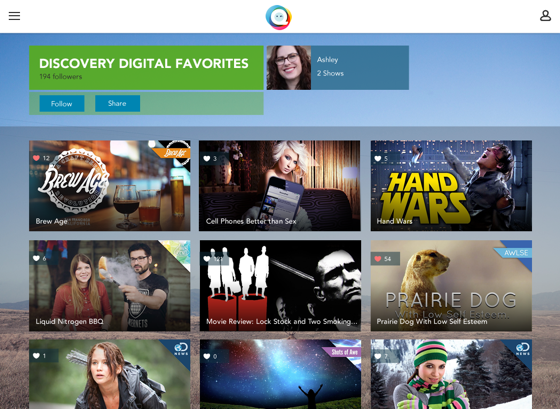 The main navigational element for Qplay is an iPad (the app will eventually be available for iPhone and Android, but at launch only the iPad is supported). From here, you can see individual videos in any chosen queue and move back and forth to find or save specific videos that catch your eye. And while Qplay’s auto-updating queues let users have a more passive experience, the company also wants users to save videos they like and start building out their own queues based on topic areas of interest to them.

Another take on getting streaming video to the big screen

Qplay is also designed with sharing in mind — you can follow your friends, see their queues, share a queue with a friend, and subscribe to other people’s own queues. It’s all the same kind of things you can do on YouTube, but there’s one last part of the Qplay equation. The company is releasing a hardware box it calls the Qplay TV adaptor (a tiny box the size of a deck of cards) to go along with its app that promises to make getting this content to your TV a simple task. Once the devices are on the same Wi-Fi network, you can use the iPad as a remote to control what the Qplay box pulls in over the internet. You’re not streaming from the iPad to the adapter — instead it works more like the Chromecast, fetching video from the internet that you tell it to. 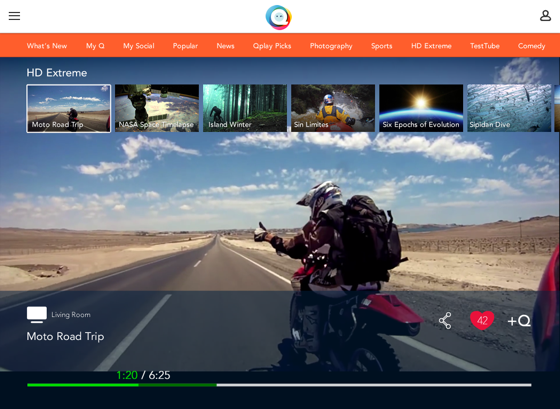 Once the video starts, your iPad is essentially out of the equation. You can use it as a remote to pause, fast-forward, find new videos, and so forth — but you can also turn it off entirely and just let the Qplay TV adapter continue to pull down video from your chosen queue. In this way, it acts more like an internet TV station than anything, playing constantly without the need for user intervention.

The real challenge for Qplay will be justifying its cost — the $49 price for a TV adapter and the iPad app isn’t too expensive, and much cheaper than a Roku or Apple TV, but the functionality will be fairly limited in comparison. Qplay is hoping to mitigate that in the coming months by adding support for services like Netflix and Hulu Plus — we saw a Netflix demo where the Qplay adapter seamlessly connected to Netflix and started playing a movie that we found while browsing the Qplay app — but for a lot of people, a cheaper and more flexible Chromecast might make more sense. That said, Qplay is considering this launch a "soft launch," and the company already plans on adding more features — though in a crowded video marketplace, it might take Qplay some time to find some traction.