Why is Nokia making Android phones?

Why is Nokia making Android phones?

Relations between Microsoft and Google are as icy as Nokia's hometown of Espoo, Finland, which made it a bit of a shocker when Nokia — by far Microsoft's largest mobile partner — dropped an Android-shaped bomb on Windows Phone this week with the introduction of its X handsets. Just weeks away from being swallowed by Microsoft, Nokia is releasing three cheap, Android-powered devices that are designed to appeal to the mass market. All three are low-end models that won’t compete with an iPhone 5S or Samsung’s Galaxy S5. Instead, they’re positioned as smartphones targeted at the millions of people globally who are currently switching away from feature phones. Windows Phone has seen a bit of success in this end of the market — and Nokia dominates sales of handsets running it — so why the switch to Android? And why now?

It’s a question that Nokia has largely avoided answering clearly this week. Instead, Nokia explains its use of Android on the X series as a method to create devices that slot in between Asha, Nokia’s low-end smartphone platform, and Windows Phone. The end goal, Nokia says, is to produce feeder handsets for its Lumia line of Windows Phones: get people into smartphones, feed them Microsoft services, and hopefully convince them to buy Windows Phone handsets down the line. It sounds like a reasonable approach until you take a closer look at the specifics. 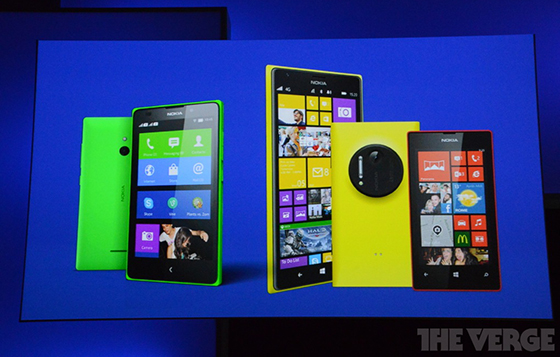 Nokia’s X handsets include almost identical specifications to the popular Lumia 520 Windows Phone, with differences to the camera, storage, and navigation buttons. It's reasonable to guess that X may be designed to replace Asha in the long term, but these first devices — shadows of the 520 running a different operating system — don't really address why they're not just running Windows Phone. Nokia’s head of devices, Stephen Elop, is keen to downplay the idea that the X series is simply a stop-gap solution until Microsoft can push Windows Phone further into the low end of the market. In an interview with The Verge this week, Elop welcomed Microsoft’s hardware changes to Windows Phone 8.1, but admitted Nokia needed devices in an area where Windows Phone can not yet fully compete in.

Nokia needed Windows Phone to push faster to the low-end

"At those lower price points where Windows Phone does not yet exist, or the Lumia experience can’t be delivered, we needed something that could be delivered there without taking on an obligation or building yet another ecosystem," says Elop. "So with Android Open Source Project we clearly get the benefit of app [compatibility]." Elop also stressed this strategy is a complement to Windows Phone. "Recognizing that there are price points and markets that are served better using some different technologies," he said.

It might well look like a complement, but with similar hardware specs for the low end — where Windows Phone is already growing and taking a bigger market share — it appears that X and Windows Phone are on a collision course. Nokia’s Lumia 520 is the most popular Windows Phone, and it now has an almost identical competitor that runs Android apps. Microsoft, through its Nokia acquisition, will have to decide whether to abandon X entirely or try to strike a tricky balance between developing apps and services for its Android-powered X handsets, all while still pushing Windows Phone.

For what it's worth, this wasn't a win for Google: every time Nokia mentioned Android on stage at its event this week, it was quickly followed by a mention of Microsoft’s services for its X handsets. It almost felt like an apology and a recognition that the two companies will soon be one. For Microsoft, the Nokia X has some benefits because it pushes the company’s services and apps, but it’s also a huge risk: while Windows Phone integrates Microsoft's services seamlessly, on Nokia X they’re simply separate experiences and apps. The support for Android apps allows X owners to simply visit an app store and use whatever services they want. Google services won’t be officially supported, unless the search giant modifies its own apps to list them in Nokia’s store. That’s highly unlikely, but X owners can still opt to go elsewhere outside of the Microsoft-backed OneDrive, Outlook.com, and Skype apps that are bundled. 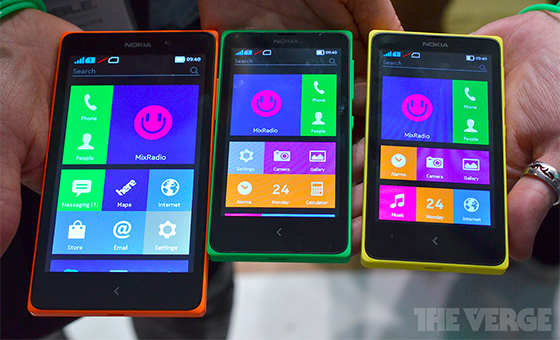 Regardless of whether Microsoft will quickly abandon X to a footnote in Nokia's history, the research and development that went into it appears to be one of the key reasons the acquisition is even happening. With devices that come dangerously close to overlapping Windows Phone in the low end, Microsoft couldn’t afford to let its primary Windows Phone partner — a company that ships over 90 percent of all Windows Phone devices — move to Android without exercising some control. A hasty acquisition allows Microsoft to shape the strategy for Nokia X and ensure it doesn’t eat into Lumia's market share. It also recognizes that there’s a change at Microsoft, a shift to the idea that building for proprietary platforms is no longer Redmond's priority. As Microsoft’s new CEO puts it, it’s "cloud first, mobile first."

"I think you’ll see at Microsoft, as this new team forms, as the new leadership goes forward, a very broadened perspective on the computing world and how we best serve consumers," says Elop. "I am sure there will be lots of opinions [inside Microsoft], but I also know with cloud first, and the desire to drive Microsoft cloud services to tens of millions of people that were unreachable before, that’s a pretty powerful opportunity."

The X series is simply a test of that strategy right now, a method for Nokia to gauge whether developers will truly port their apps across and build momentum. Windows Phone app growth must have been frustratingly slow for Nokia, and the platform lacked the low-end reach that Nokia had enjoyed with Symbian. It’s also a way for Nokia — and Microsoft in future — to try to disrupt Google’s use of Android the same way Amazon had with the Kindle Fire series. There are no Google services on these phones, and Android app developers who want to build for the X will need to edit the in-app payments, location, and notifications aspects of their apps. This gives Nokia and Microsoft control of the all important in-app purchases transactions, mapping data, and both push notifications and messages. 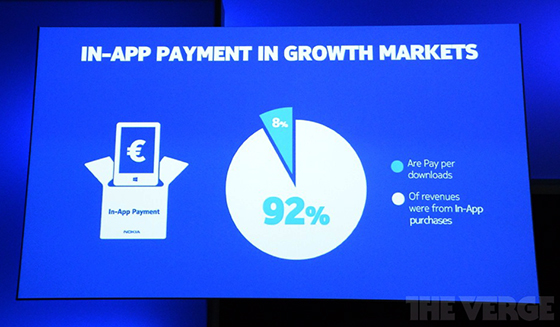 Extricating Google from Android, in Nokia's view, is key to securing the millions of consumers who are moving from feature phones to smartphones at a rapid pace. Low-cost handsets for growth markets are (and always have been) key for Nokia, which opened its MWC 2014 press conference by rolling out a basic €29 handset. In these growth areas, effectively nobody pays for apps — more than 90 percent of transactions are made within apps. Nokia’s massive operator billing network helps facilitate those transactions. As Microsoft takes over, it might help move people into its ecosystem rather than Google’s.

Many are assuming Microsoft will kill the Nokia X in the coming months, but it’s more likely to take a measured approach, monitoring to see whether it's actually effective in bringing consumers into the Microsoft ecosystem. Put simply, mobile users aren't signing into Microsoft accounts at the rate they're signing into Google and Apple ones. Microsoft wants them to, but it must avoid confusing developers in the interim: do they simply port their Android apps across to the Nokia Store and give up on Windows Phone? Or could this low-cost approach attract developers that may not have ever seriously considered creating apps for Microsoft’s platforms in the first place?

Adopting Android was Nokia's call, but now, it's Microsoft's decision to live with — and it must tread very carefully. If it doesn't, Windows Phone risks becoming the next burning platform.