4K gaming is coming to an Android tablet near you

And it's good, it's very good

Share All sharing options for: 4K gaming is coming to an Android tablet near you

Qualcomm announced its Snapdragon 805 processor back in November, but it wasn't until today that we could try out its promise of Ultra HD graphics for ourselves. The American chipmaker has built its own 4K tablet — spanning a 3,840 x 2,160 resolution — to demo the graphical capabilities of its latest chip and the consequent benefits of owning a 4K Android device. That tablet is on show here at Mobile World Congress in Barcelona.

A selection of widely available Android games are preloaded on Qualcomm's tablet, including Asphalt 8 and Injustice: Gods Among Us, none of which require any special adaptation to run at the higher resolution. Of course, their textures and graphical detail are still designed for a lesser resolution, so they don't look as awesome as they could, but the sheer fact that they can be run at 4K with a perfectly playable frame rate is impressive. The 4K res is exactly four times denser than 1080p and 2.6 times more pixel-rich than the iPad Air's 2,048 x 1,536. 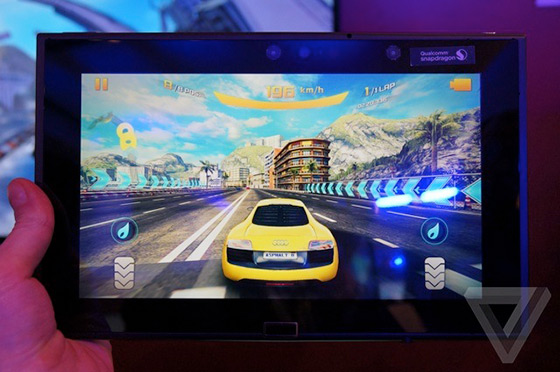 While gaming stands to be the biggest and most immediate winner from the increased pixel density, other graphically tricky applications — such as smoothly displaying kanji on a zoomed-out webpage — also stand to benefit.

Qualcomm says the Snapdragon 805 is ready to go, and the requisite displays clearly already exist, so it's now just a matter of time before an Android device maker pairs the two and takes Google's OS into the 4K era. The first tablets and smartphones using the new chip will show up in the summer, with an expected 2.5GHz clock speed on the four Krait cores inside.