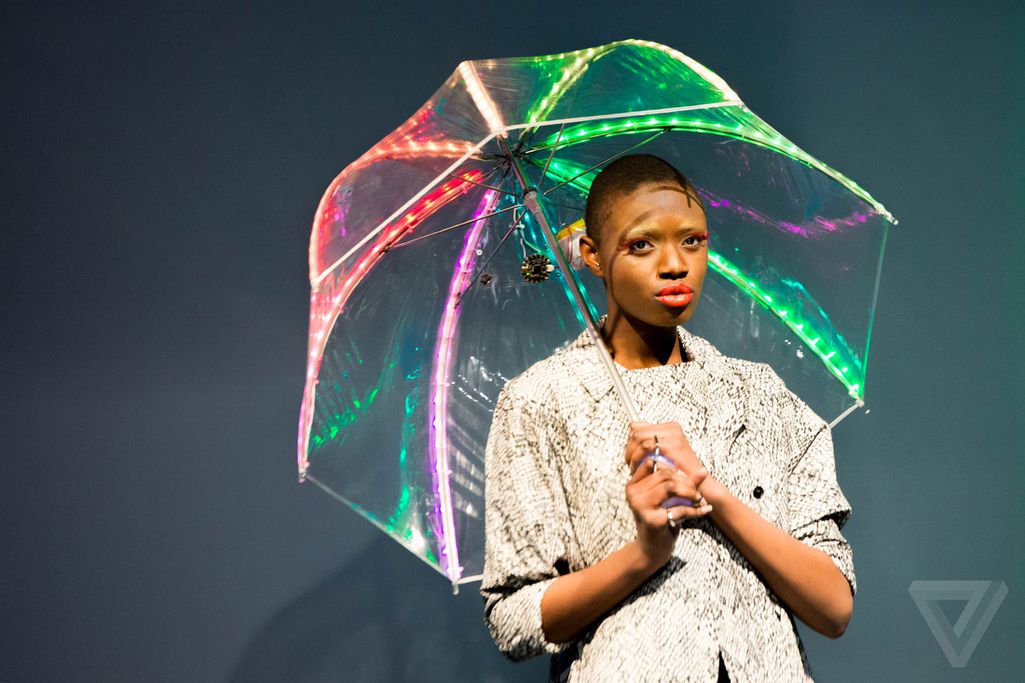 Asher Levine wants me to wear a jumpsuit. At Tech In Motion's Wearable Tech Fashion Show, the young American designer is wearing a onesie the color of caution tape with zippers running down the front. He tells me it's not one of the pieces being shown tonight among all the wearable fashion technology — he just made it for himself. "I think everyone should wear jumpsuits," he says as we walk out of the crowd.

And then his jumpsuit starts beeping. Levine has outfitted it with a TrackR sensor, like he's done with many of his recently designed handbags and jackets. It's telling him that he's walked too far away from his cell phone — and now his bag is going off, telling him the same thing. It's one of his Grenade bags that will be featured in tonight's show, made of rubbery material molded to resemble the wrinkled exterior of a grenade while also looking like the skin of an extinct reptile.

Until now, we've mostly heard about tech companies and how they are dealing with fashion. Is the Pebble Steel's design the best for a smartwatch? Is Samsung's new Gear Fit what all fitness bands should look like? Will Google Glass ever look normal? But while everyone is focusing on technology companies, the fashion industry has been slowly approaching technology from the other side. Designers now have an overflowing toolbox of technologies to experiment with, and as they do so, they're reforming fashion's new identity literally before our eyes.

Levine, who has dressed the likes of Beyoncé, Lady Gaga, and Rita Ora, is one of the few designers leading this revolution with fashions that are inspired by, created with, and want to be new technology. In the past he's made nanotech-inspired fabrics that shift from a tighter, waterproof state to a relaxed, breathable state. He also recently worked with the software company Phone Halo to embed those customizable Bluetooth TrackR microchips into pieces of clothing and accessories. 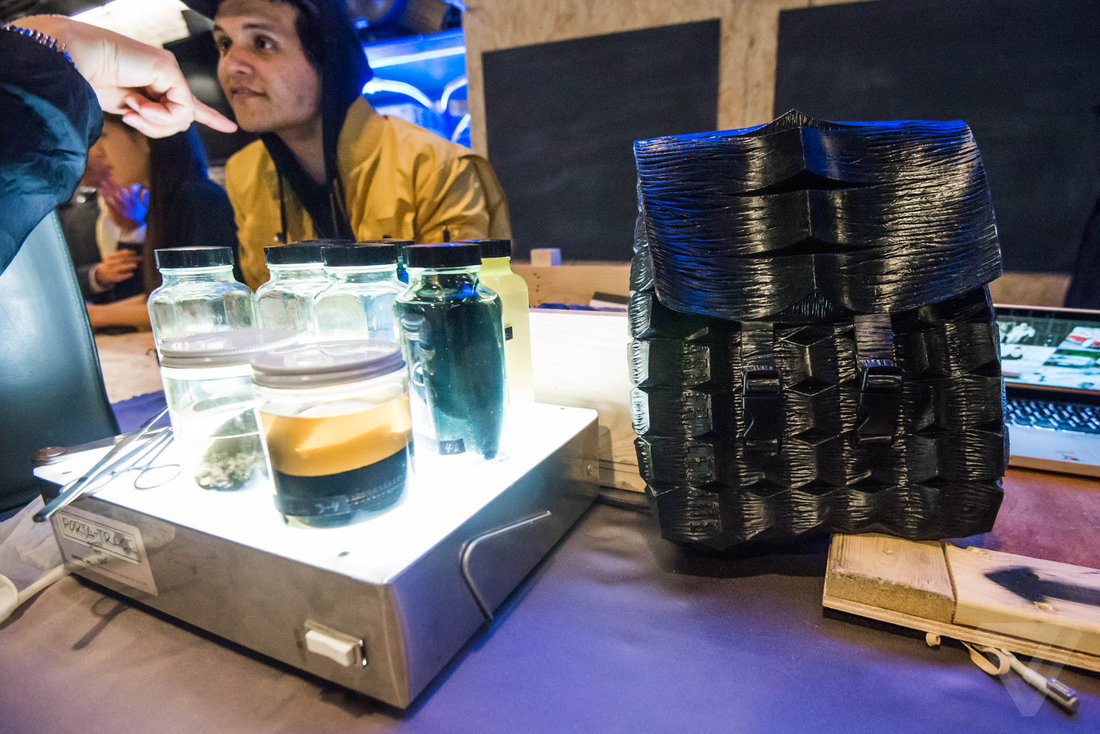 "Fashion is still stuck in its archaic cycle — even with the way things are made."

His latest ideas have him experimenting with bioengineering to create hybrid leathers "grown" and "printed" in a laboratory. The hybrid leathers satisfy the science nerd in Levine, letting him make bags and vests with muscle-like striations as patterns. Levine says he sees it as part of his job to work with companies and figure out how to take their technologies and make them modern and sexy.

It's part of a revolution in fashion that, while still in its infancy, is stepping away from classic styles and making a name for itself by being different, digital, and right now, a little weird. "Fashion is still stuck in its archaic cycle — even with the way things are made," Levine says. "Now it's important to be curious, and I translate my curiosity with the clothing into something that's utilitarian and sexy." 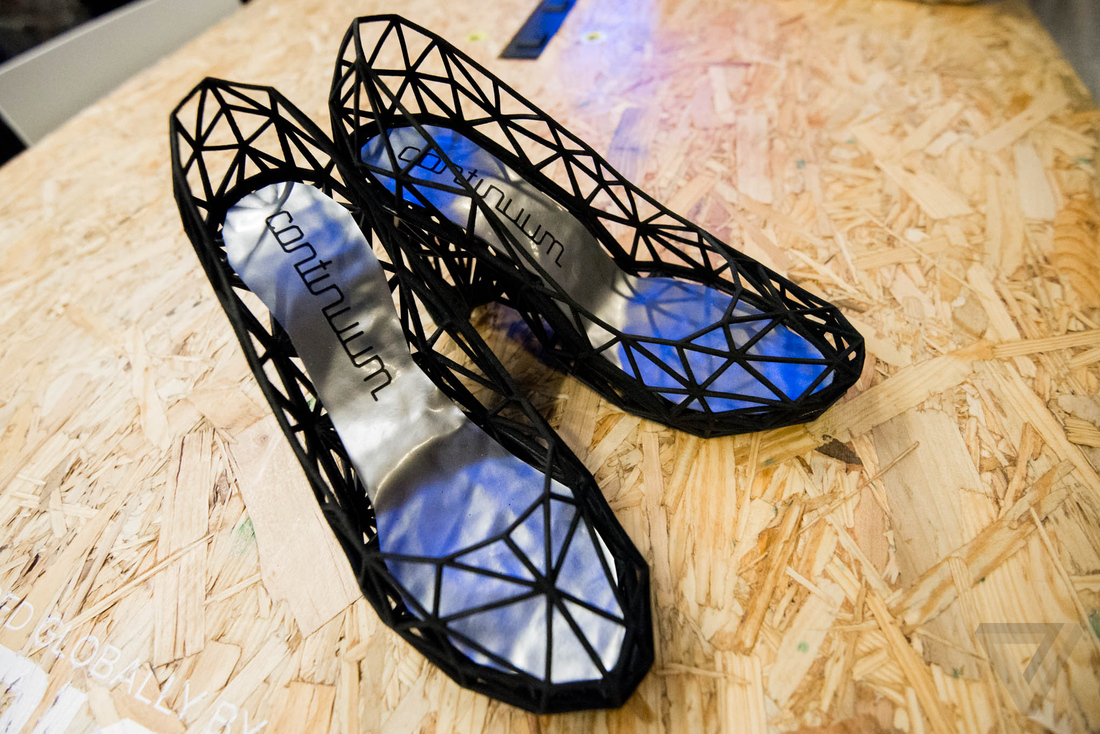 "Sometimes I'll put the printer on overnight, and in the morning, there's a shoe."

Most of the designers featured in Tech In Motion's Wearable Tech Fashion Show are, like Levine, fighting against fashion's antiquated methods and aesthetics with new weapons. Mary Huang, founder of Continuum Fashion, focuses on 3D printing shoes that are both stunning and actually wearable. Many of her designs could only be produced with a 3D printer due to the fluidity of the designs, and while her work allows her to play with new forms, she says it's also an experiment to see how the medium can revolutionize the manufacturing of shoes. According to Huang, if fashion companies used 3D printing for more than just prototyping in the future, it could save the industry money by removing arduous and expensive production processes, like molding, for shoes. This could render everything based on digital documents, which could even be sold to people to print their own footwear. "Sometimes I'll put the printer on overnight, and in the morning, there's a shoe," she says. "I'm always trying to see how close I can get to just pulling a shoe off the printer." 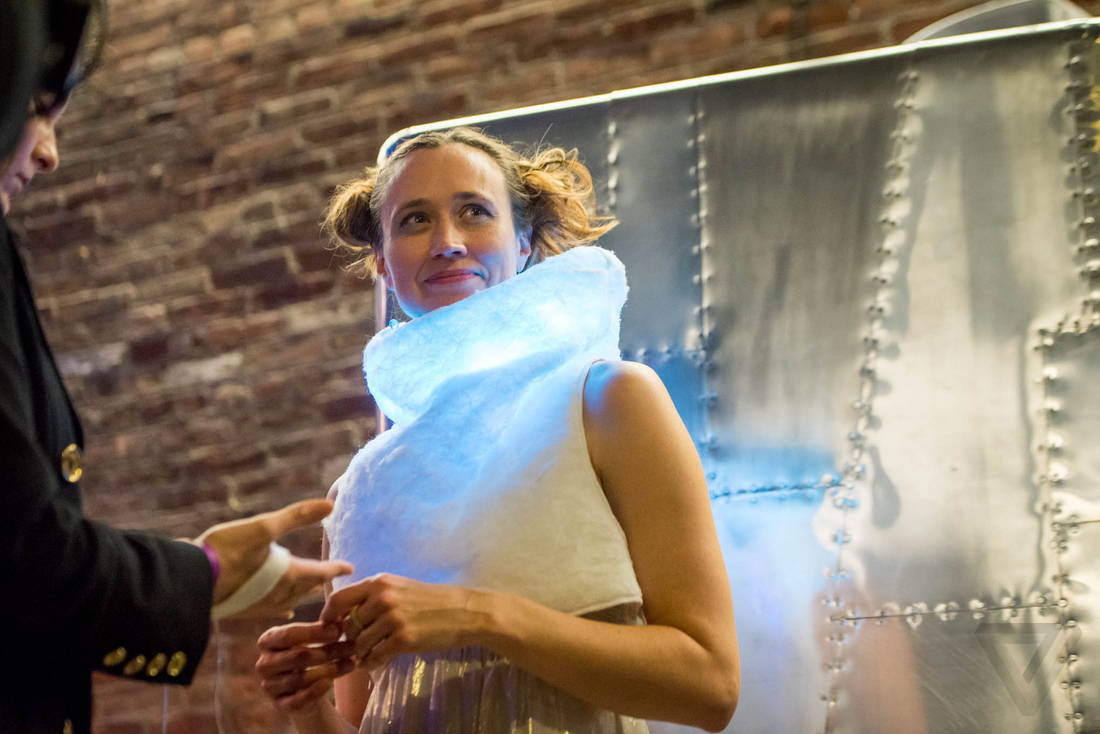 3D printing might be an obvious method for fashion designers to embrace, but technologies from all different fields are inspiring designers to rethink the way they see and do things. Take Sensoree's Mood Sweater — it uses sensors to detect a certain kind of sweat in the palms of your hands that varies depending on your emotional state, and then translates it into multicolored light emitted by LEDs. Kristin Neidlinger created the sweater for her MFA design research at the California College of the Arts, but mainly as a practical device. It was developed for people who have conditions like autism or sensory processing disorder as a way to help them see how they are feeling and project those feelings to others around them. While Neidlinger says she thought of it as strictly a therapeutic device, the fashion industry started to notice it for both its technical and stylistic creativity.

While the Mood Sweater is a totally foreign-looking object, fashions like the classic businesswear from the MIT-born Ministry of Supply take a more conservative, utilitarian approach. Inspired by mountain-climbing gear, its dress shirts and pants use fabric with heat-mapping technology that acts like a battery to absorb excess heat from the body and release it when needed in cooler atmospheres. CEO Gihan Amarasiriwardena tells me the company wants to make really comfortable clothing that doesn't just function for an office environment. "Clothing is a very intricate part of our day," Gihan says," and we often overlook how much its performances affects our abilities during the day. People don't just have a day life or a work life — you live one life, and these technologies allow you to interact with the different environments you're constantly moving in and out of every day." 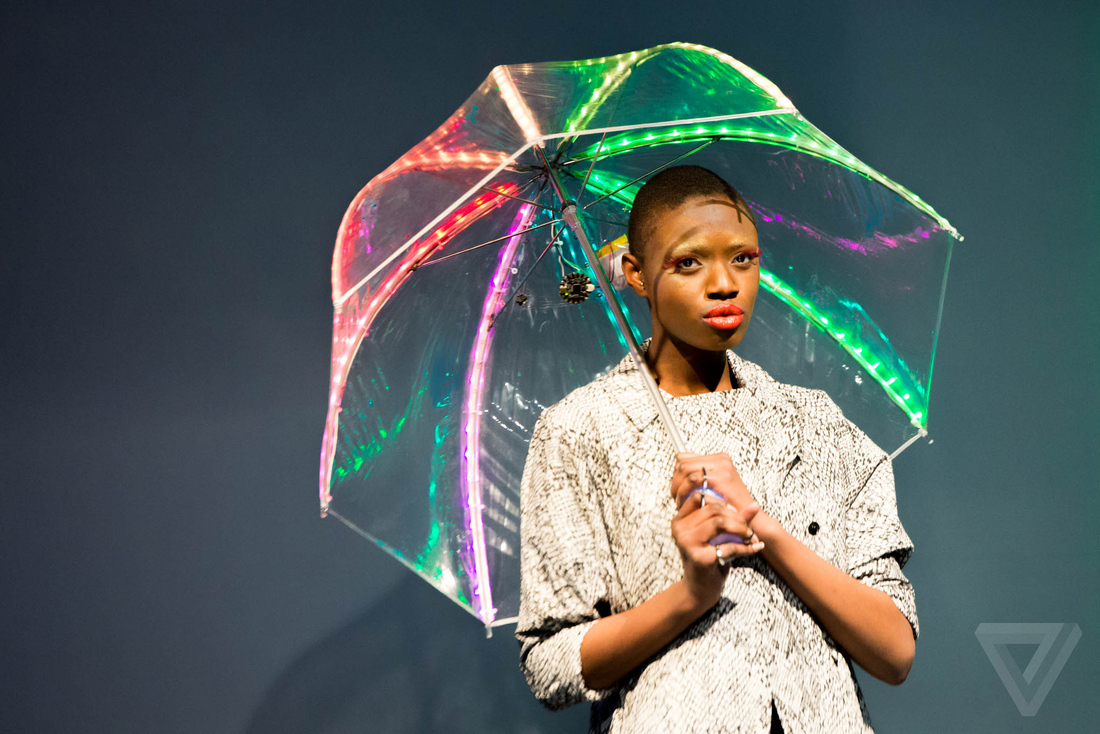 Currently, technology for fashion is both a means to an end and the end itself. Redefining fashion is about doing things that haven't been done before, and technology gives designers the tools to do this. Things like Sensoree's Mood Sweaters are weird and functional in ways fashion currently isn't, and that's a huge step forward towards the future identity of the industry. But at the same time, ways of integrating technology into fashion that are less obvious, like special fabrics and modernized production methods, will drastically change the ways things are done as well as how they look.

"I'm curious about what isn't there," Levine says. "And I think people should think about that — it could give them the inspiration to create what isn't there." Creating something that's never existed is both difficult and exciting. The revolution is just beginning, but fashion has the tools to redesign not only clothing but the process of making it. The things that made fashion fashion until this point are fading, and while traditionally designers have been plagued with the age-old question of form versus function, the next generation of designers will be asking a whole new question: why not both?