Code.org turning the ashes of 'Flappy Bird' into a phoenix of coding education

Share All sharing options for: Code.org turning the ashes of 'Flappy Bird' into a phoenix of coding education

The wildly simple yet infinitely frustrating game Flappy Bird is no more, though it continues to live on in countless clones. Now Code.org, the non-profit aimed at teaching people how to write code, has created a tool to make your own Flappy Bird game while learning some code at the same time.

The lesson takes the form of a puzzle that goes through the actual game mechanics of Flappy Bird step-by-step, from flapping the bird's wings each time you click your mouse, to deciding what happens when your character either hits or misses the large green pipes. At each step along the way, you need to figure out how to reconfigure the game to make it work the way it's supposed to. The end result is a very basic lesson for what's required to build the game, something that's been distilled down to a drag-and-drop interface. And when you're done learning, you can adjust every facet of the game, right down to choosing whether your bird sounds like a jet engine or a laser every time it flaps. 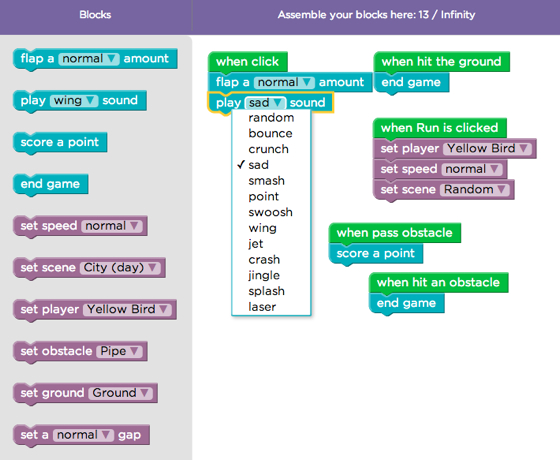 The code your own Flappy Bird game was made to coincide with Code.org's one year anniversary. In an interview with GeekWire, Code.org co-founder Hadi Partovi said the idea for the project was born during an employee happy hour when the group realized it would be a good game to turn into a code lesson. Similar efforts have tapped Rovio's Angry Birds series, Frogger, and PopCap's Plants vs. Zombies, though those games still exist.

The extinction of 'Flappy Bird': the rise and fall of a frustratingly simple mobile game