Boeing is making a phone for 'Mission Impossible' agents

Boeing is making a phone for 'Mission Impossible' agents

Boeing's mysterious smartphone — the one that was supposed to have come out by the end of 2012 — is now out of the bag. Boeing today posted a full breakdown of Black, a device aimed at defense and security customers. The FCC also published specifics on the hardware and software, including details on a feature that removes data if the device is opened up.

Expandable with other hardware

According to Boeing's spec sheet, the Black is 5.2-inches tall, with a 4.3-inch, 540 x 960 display, and weighs 170 grams. It features three bands of LTE, as well as antennas for WCDMA and GSM. Running it all are dual 1.2 GHz ARM Cortex-A9 CPUs and Google's Android, which Boeing says will work "just the way you'd expect." The hardware itself is being assembled in the US, and can be expanded from its back panel to work with biometric scanners, satellite transceivers, solar chargers, and other accessories. 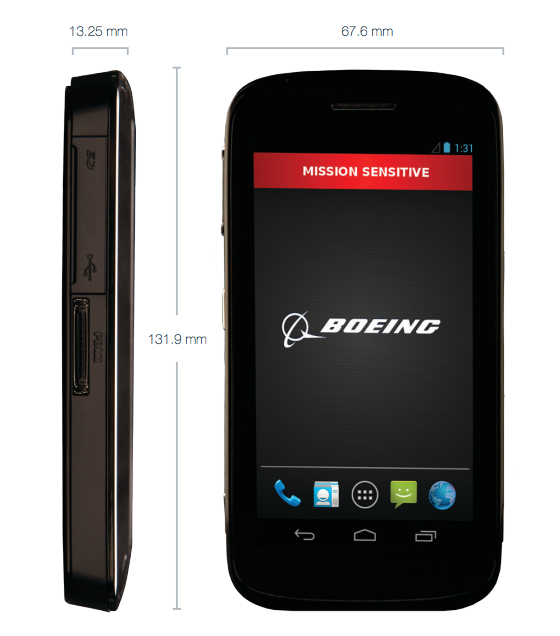 However much of the intrigue surrounding the device is a security feature that destroys information stored on the phone in the event that someone tries to crack the case open. The FCC filing, spotted by Quartz, goes into some detail of how this works:

The Boeing Black phone is manufactured as a sealed device both with epoxy around the casing and with screws, the heads of which are covered with tamper proof covering to identify attempted disassembly. Any attempt to break open the casing of the device would trigger functions that would delete the data and software contained within the device and make the device inoperable.

It's unclear how exactly that would work if, say, the battery was depleted. A Boeing spokesperson declined to comment on that aspect of the hardware.

Boeing hasn't set a price or definitive release date for it yet, though told The Wall Street Journal it would be coming "soon."