Nearly 20 years after he finished the beloved comic strip Calvin & Hobbes, Bill Watterson has gone back to the drawing board for one more panel. Watterson has contributed the movie poster for Stripped, a new documentary about cartoonists struggling with the death of newspapers and the future of the medium. There, he joins a host of fellow comic-strip legends such as Jim Davis of Garfield fame, Cathy Guisewite of Cathy, and Bill Amend of Foxtrot, not to mention their internet successors at Penny Arcade, The Oatmeal, and many others. According to the directors the movie contains Watterson's first recorded interview.

Regardless of what he says on tape, it's refreshing to see that Watterson's work hasn't lost its charm. In the movie poster, below, a figure which bears a striking resemblance to an adult Calvin literally leaps out of his clothing with surprise at the death of newspapers — a wonderful visual gag with clothes comically sailing through the air — while his tablet-toting dog wonders what the fuss is about. 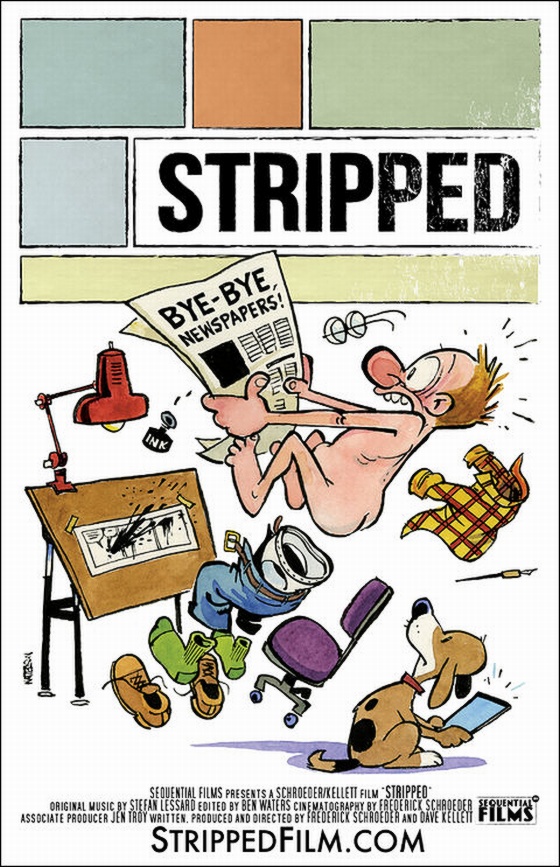 We have to wonder if it will be the last comic strip panel Watterson contributes, though. After two decades, he seems to be coming out of his shell, granting interviews and donating a painting for a Parkinson's fundraiser. Last year, Calvin and Hobbes was finally released in ebook form. Also, without Watterson's input, filmmakers penned a love letter to the cartoonist, another documentary called Dear Mr. Watterson.

Here's a trailer for Stripped, the upcoming film.