'Out There' is a lonely, lovely space survival game

Interstellar strategy on your phone

Share All sharing options for: 'Out There' is a lonely, lovely space survival game

In space, no one can hear you second-guess yourself. And you'll be doing a lot of that in Out There, which launches today on iOS and Android. It's a game that has you exploring the furthest reaches of space in order to get back home, with nothing to get you there but your ship, whatever resources you can scrounge along the way, a bit of quick thinking, and hopefully some luck. You'll constantly have to make tough choices — when your ship is low on fuel, do you travel to a new star system to find more, or risk destroying your ship to skim some energy from a nearby star? Out There originated with a near-universal obsession: like many of us, the game's developers are fascinated by space, and the vastness it entails.

"The thing is," says artist and programmer Michael Peiffert, "it offers nothing but death."

Out There puts you in the space boots of a stranded engineer. While on a routine trip to Jupiter, you awaken from a cryogenic sleep to find yourself in an unknown part of the universe. It's sort of like Star Trek: Voyager, except you're all by yourself. Your only real goal is to get back home.

The actual game plays out sort of like a strategy game mixed with a choose-your-own-adventure novel. You'll travel from one star to the next, and each one will feature different planets and other objects orbiting it. You can send probes to gas giants in order to collect fuel and mine terrestrial planets in search of useful minerals. Some planets also have life, letting you briefly interact with strange alien creatures, and every so often you'll stumble across abandoned ships so you can upgrade your ride to something bigger and better. The strategy elements are relatively simple, but force you to deal with very limited supplies: your ship can only hold so much at one time, and your fuel, oxygen, and ship's hull are constantly being depleted as you explore.

You have to deal with very limited supplies

It sounds simple enough, but Out There constantly throws random events at you, which can both help and hinder your plans to get home. You might stumble across a massive space worm, for instance, and have to decide whether to blast out of there or follow its trail to learn more about it. There's an obvious risk in most of these decisions, but they can also come with unexpected payoffs. You might discover a useful new technology by investigating an abandoned library, or you might take serious damage when you get caught in an asteroid field. Sometimes you don't actually get a choice: when something smashes into your ship, you'll simply have to figure out how to repair it and move on.

The fact that these scenarios — there are around 300 events in total — pop up randomly is what makes the game so interesting. There's no set path through Out There. Each time you play you'll see different planets, meet different aliens, and experience different random events. As you learn how the game works you'll become better accustomed to dealing with these scenarios, but their random nature makes the game challenging in every playthrough. "We tried to put the player in situations where he must decide between taking risks to explore or running away from a certain death," says Peiffert. You'll also get a score after each game, so you can compete with friends as you would in a puzzle game like Threes. 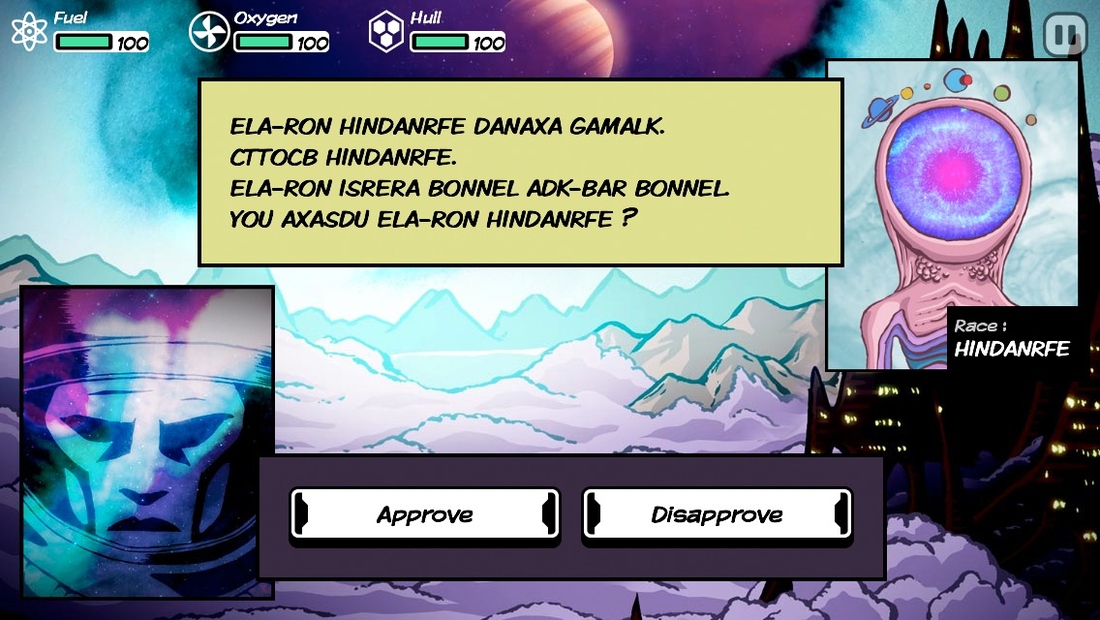 Out There is also, perhaps surprisingly, an ideal mobile game. You'll die a lot — sometimes in a matter of a few minutes — but this just makes you want to hop back in and try to do things differently and better the next time. When you die, it's almost always the result of a bad decision you made. The game manages to capture that amazing feeling of being alone in space, but packages it in a way that makes it satisfying even in quick bursts. Every time you play the hope is to get a little further than last time, and the wonderful, comic book-style art will only make you want to explore further. The alien and ship designs in the game are fantastic and though you'll spot some distracting spelling and grammatical errors, the writing does a good job of pulling you into the world.

The game will be coming to Windows and Mac later on as well, and the developers are also planning to expand on the fictional universe with future updates later in the year. "We have interesting ideas we would like to explore," Peiffert says. In the meantime, you'll need to figure out how to stay alive long enough to actually see the end. After playing the game for days, I still haven't made it home.