How will Sochi handle its Olympic hangover?

How will Sochi handle its Olympic hangover?

Russia wants to turn the Winter Games host city into a tourist destination, but experts are skeptical

The Winter Olympics are over, but the massive stadiums, hotels, and roadways that were built for the event aren't going anywhere. And if history is any indicator that could be a major problem for host city Sochi.

Russia spent a record $51 billion preparing Sochi to host the games, transforming the seaside resort city into a winter wonderland in one of the most ambitious overhauls in Olympic history. Authorities have said they hope the investment will turn the region into a major tourist destination, though few specifics have been offered and experts are raising red flags.

"They don't seem to have made any real plans as to what happens after," says David Wallechinsky, president of the International Society of Olympic Historians. This lack of clarity, together with geographic and political challenges, doesn't bode well for Sochi's future he adds. "I can't conceive of this turning out well."

"I can't conceive of this turning out well."

The fear is that post-Olympics Sochi will go the way of Athens or Montreal: host cities that years later are still left with empty stadiums and other resource-draining "white elephants." As with many other Olympic cities, each built expansive facilities to accommodate the influx of fans, athletes, and media, but found little use for those facilities once the torch was extinguished — all while paying to maintain them or chipping away at huge debts.

Countries typically argue that investments in Olympic infrastructure will pay dividends down the road, but economists say that's not the case. A 2012 study from the University of Chicago compared recent host cities to similar non-host cities, and found no significant differences in the growth of tourism, financial services, or construction. A 2009 paper found that host cities tend to see a surge in exports, though cities that bid on the Olympics and failed saw similar increases in trade.

Cities that fare relatively well after the Olympics tend to be those that have clear redevelopment plans and invest heavily in non-sports related infrastructure. Atlanta revamped its airport and expanded its highways prior to the 1996 Summer Games, and eventually repurposed its Olympic Stadium as a baseball field for its professional team. In London, the Olympic complex has enjoyed a second life as a thriving urban development, with a large mall and high-end apartments carved out of buildings where athletes stayed during the 2012 games. Organizers also built many temporary structures, making it easier to remove or repurpose them after the event.

"The real issue comes when proponents of hosting suggest that there will be big economic benefits," says Scott Holladay, a professor of economics at the University of Tennessee. That's not the case, he adds, though he acknowledges that there are non-economic benefits to hosting the games, including increased publicity and national pride. "If that is the real benefit of hosting, proponents should be clear about it." 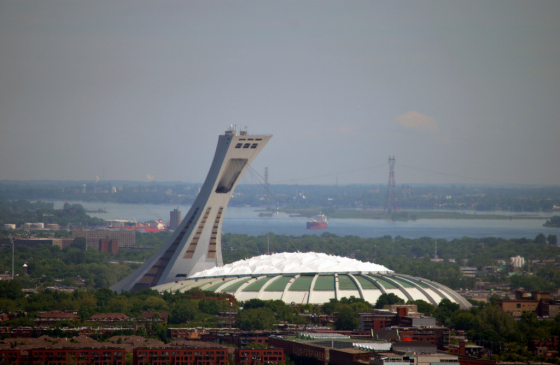 It took Montreal 30 years to pay off the debt for its Olympic Stadium. (Nic Redhead / Flickr)

Sochi organizers say the games will transform the region's economy through increased tourism, though steep challenges lie ahead. A recent report from Moody's Investor Service found that the costs of maintaining Sochi's Olympic infrastructure will likely surpass any increased tourist revenue, adding that the region would need to see 5 million tourists a year — more than double its current rate — just to keep its hotels full.
Authorities have already revealed plans to refashion Olympic buildings into more tourist-friendly destinations. The Adler Arena, home to this year's speed skating events, will be turned into an exhibition center and facilities in the nearby mountains will be converted into a skiing resort. The current media center will be turned into a shopping mall, and another stadium will be used to host some matches during the World Cup, which Russia hosts in 2018.

Maintaining structures over the long haul may prove costly, however, especially in light of concerns over building quality. Many have accused the Russian government of handing out huge contracts to Kremlin-friendly businesses, which in turn sought to cut corners by avoiding quality assurance and environmental impact assessments.

"Almost worse than the middle of nowhere."

"Quality wasn't an issue," Martin Muller, a geography professor who spent five years studying the region, told the New York Times. "It wasn't demanded by investors, and nobody asked for it. Builders would sometimes even try to bribe their way through the quality-assessment phase. This is not uncommon as a business practice in Russia."

Then there's the challenge of actually bringing people to Sochi. The region is home to just 400,000 inhabitants, and although it was once a popular destination among Russians during the Soviet era, tourism has dropped and Russia's economy is sputtering. Americans and Europeans, meanwhile, would likely choose to vacation closer to home, or in countries that wouldn't require them to obtain travel visas. The area has a tumultuous history, as well, especially in the North Caucasus mountain range where various ethnic and religious groups have engaged in bloody conflicts over the years.

"It's almost worse than the middle of nowhere," says Wallechinsky, who was in Sochi doing radio commentary this month. "It's near a volatile zone."

Sochi's economic future may be muddled, but for the next few weeks at least it will still be a sports town. The city is playing host to the Winter Paralympic Games, which begin on March 7th.