Blockbuster production: an inside look at building the 2014 Oscars

Share All sharing options for: Blockbuster production: an inside look at building the 2014 Oscars

This Sunday the entertainment world will assemble for its biggest night of the year: the 86th annual Academy Awards. The Oscars will cap off an awards season that’s been particularly kind to the science fiction genre, with the space adventure Gravity and Spike Jonze’s futuristic drama Her both up for multiple Oscars — including the honor of best picture of 2013. It will also be a night full of potential for Netflix, which has already scored its first Emmy and Golden Globe wins, and could add an Oscar to the mantle with the documentary The Square.

Long before the awards ceremonies and red-carpet broadcasts kick off, however, the preparation begins. Since 2002 the Oscars have taken place at a 3,400-seat venue on Hollywood Boulevard, originally known as the Kodak Theatre before that company’s bankruptcy issues took hold. In 2012 Dolby acquired the naming rights, turning the theater into a showcase for its own audio and display technologies. It’s since become a popular venue for Hollywood premieres, with films like The Hobbit: The Desolation of Smaug showing off the company's Atmos surround-sound format. 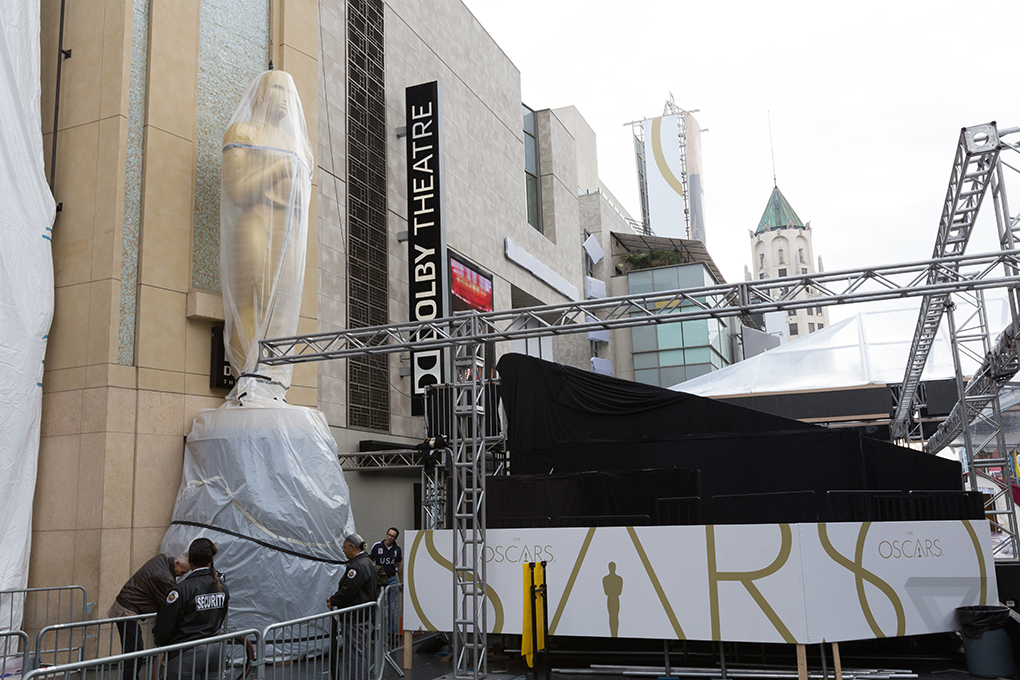 As one would expect, Dolby takes particular pride in the audio portion of the Oscar telecast. This year it’s estimated that 1.2 billion people around the world will watch the broadcast live in over 60 countries. Several of those, including the United States, will be receiving a 5.1 surround mix at home as well. Microphones spanning the front and rear of the Dolby Theatre record the sound of the crowd itself, which lead sound mixer Paul Sandweiss says allows him to recreate the experience of being in the theater at the center of the action. "Not in the front row where everybody’s behind me, and not in the back row where everybody’s in front of me, but in the center," he says. "That’s where I’d want to sit to watch a show when I go."

One new twist this year is that some of the film clips themselves will be played back live in the auditorium in 5.1 — so those surround microphones can pick up the echo of Sandra Bullock’s panicked breathing in Gravity just like the Oscar attendees will hear it. The live orchestra, on the other hand, receives a slightly different treatment: the musicians are actually playing in a studio 10 blocks away at the Capitol Records building, with their audio piped over to the broadcast trucks for integration into the production and the broadcast. According to this year’s Oscars sound team, it’s all about clarity and control: the ability to get pristine audio of the orchestra without the compromises that recording them live in the theater would require.

It takes a 20-person crew three days to set up all the speakers, rigging, and cabling required for the Oscars, and this past Wednesday we visited the Dolby Theatre as final preparations were underway. Outside rain threatened as the red carpet was being assembled, while inside the theater the level of security rivaled that of a presidential address (those wearing credentials weren’t even allowed to have their photos taken with badges displayed, lest someone duplicate them from a picture). As the first day of rehearsals started, we got to take a look at how the venue is transformed into the home of the biggest awards show of them all.

The 2014 Oscars: all the news from Hollywood's biggest night