A lot of products come out each week â we don't highlight all of them, but all of them make it into The Verge Database. In Spec Sheet, a weekly series, we survey the latest product entries to keep track of the state of the art.

Health and fitness broke Jawbone, Fitbit, and Nike into the tracking band world, and now the giants of the electronics industry are trying to push their way in as well. Samsung, Huawei, and Sony each launched tracking bands atÂ MWC 2014; other than LG dipping its toe into the sphere with theÂ Lifeband Touch, this is the first wave of big manufacturers of mobile devices to try their hands (and wrists) at tracking bands. But how do they stack up against each other? 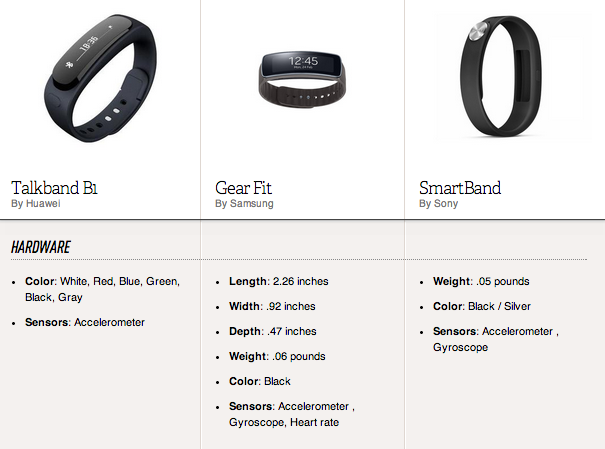 Click above for full specs on all three bands.

The overarching design of all three bands is very similar: only Huawei's TalkBand B1 comes in colors other than black, white, or silver, and they're all rubberlike with snap closures, the actual hardware sitting on the top of your wrist. If the screen on the Samsung Gear Fit wasnât on, it would be hard to pick these bands out in a box of trackers â the simplest design was clearly the easiest way for these big companies to enter the tracking-band sphere.

But the differences lie in the hardware, rather than the wristband. The TalkBand B1 doubles as a Bluetooth 4.1 headset with NFC connection, easily snapping out of the band and into your ear. Its tracking abilities are currently very limited: it only has an accelerometer to track how many steps you take, how many hours you slept, and how many calories you've burned. And unfortunately its 1.4-inch AMOLED screen can't compare to the gorgeous screen on the Gear Fit.

In fact, no screen on any available tracking band comes close to the Fit's: Samsung's band version of its Gear smartwatch has a 1.84-inch super AMOLED touchscreen that you swipe to access all its apps, forgoing the typical button that most tracking bands have. While the 128 x 432 screen is the device's main attraction, the body holds an accelerometer, gyroscope, and a heart rate monitor that collect and display data in real time throughout the day. Everything syncs with apps on your phone, but you don't have to whip it out every time you want to check stats thanks to the Fitâs stunning screen.

The only one that doesn't have a screen is Sony's SmartBand, but it makes up for that by weighing in at a mere 0.8 ounces â the lightest of the bunch. We first saw the company's Core tracking-sensor technology at CES 2014, and other than the name "SmartBand" and particular form factor, we haven't learned much more since. In addition to tracking with an accelerometer and a gyroscope, the SmartBand syncs with the Lifelog app (set to be released in March with the band) that tracks other details of your life. It will save the places you go, the songs you listen to, photos you've taken, games youâve played, and more. If this so-called "SmartWear Experience" works well with the app and band in sync, working in the background, without much effort by the user, it could be the way Sony pushes to the front of the pack of tracking bands.

That's a big bet, however. No screen means the SmartBand relies solely on vibration alerts, which will work fine for simple notifications like, say, an alarm in the morning to wake you up. But when the band notifies you of incoming texts, calls, and Facebook and Twitter activity, it will be hard to differentiate between those using just vibrations â and you'll still have to look at your phone to answer any alerts. 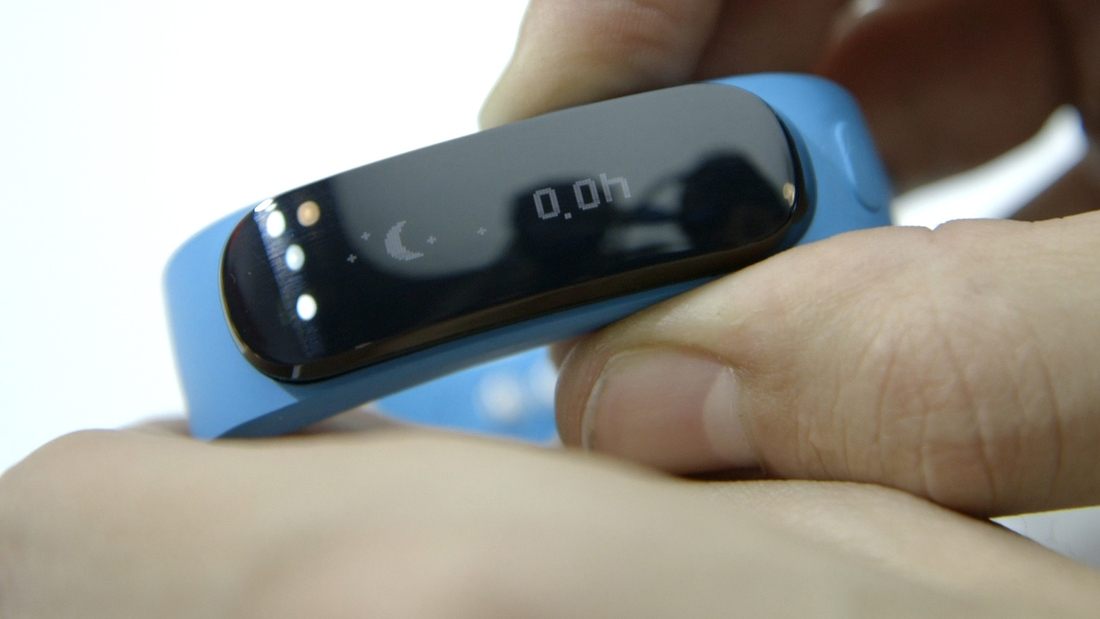 So we have three new tracking bands to consider, all attempting to provide unique experiences on top of the basic fitness functionalities of things like Nike's FuelBand SE and Jawbone's Up24. But itâs still too early to tell if any of them will work as promised, or as the companies imagined. Fitness has become the excuse to make a tracking band, and now more companies in the sphere means more competition â maybe a stylish device that can accurately track fitness, and monitor your life in a meaningful way, isn't too far away.

There were a bunch of other products announced this week at a surprisingly busy MWC 2014:

If you want to learn more about any of the products mentioned above, all of our information on them can be found through the database box located beneath the article. For more on wearables, cellphones, and just about every product around, you can check out the full Verge Database right here.