The 530-pound Exosuit is a submarine you can wear

The 530-pound Exosuit is a submarine you can wear

Scientists are now using the suit to study glowing fish 1,000 feet below the surface

The six-and-a-half foot tall, 530-pound aluminum suit looks like something out of an action movie. In reality it has an entirely different — and more intriguing — purpose. Come this summer, scientists will be using the suit, known as the Exosuit, to dive up to 1,000 feet into the ocean with the aim of collecting and studying bioluminescent fish. At such extreme depths, despite almost no visible light, a bounty of mysterious, glowing fish thrive. And with the Exosuit, scientists will observe these fish like never before.

The Exosuit itself is the latest "atmospheric diving system" — a term for suits that protect the operator in a bubble of hospitable conditions. That means divers using a suit like this feel the same pressure that you and I do here on the surface of the planet, and they don’t have to be placed in a decompression chamber immediately after a dive.

Such suits have existed for over a hundred years — early models looked more like a Big Daddy than the Exosuit — but this latest version is lighter and allows for more precise movements. That’s thanks to 18 rotary joints, highlighted in red, that allow the diver to maneuver their arms and legs. And despite the suit’s size, "it's basically effortless to pilot in the water," according to the American Museum of Natural History’s dive safety officer Michael Lombardi, who’s trained with the system and will be conducting the deep-sea dives later this year. A diver could technically swim with his limbs in the suit, but it’s equipped with four 1.6 horsepower thrusters that assist with movement. The Exosuit is also safer and more capable than prior models: it’s connected by a tether to a boat on the surface, but it carries enough battery power and oxygen to keep the diver alive underwater for 50 hours.

"We feel like we're walking on the moon, because there's just a handful of studies in this area"

There’s only one such suit in existence, and it’s owned by a contracting company called J.F. White. It’s currently on display at the American Museum of Natural History (AMNH) in New York through March 5th, and the museum held an event this week to mark the suit’s arrival. The $600,000 ensemble has already seen some action in commercial areas since it was completed in 2012, including a mission to work on the massive water tunnels that serve New York City. But this summer’s Barlow Bluewater Expedition off the coast of New England will be its first scientific endeavor.

The goals of the expedition are twofold. Scientists led by John Sparks, a curator at the AMNH, are hoping to observe strange bioluminescent fish that use chemical reactions to emit distinguishing light patterns. Key to Sparks’ studies is the question of how fish diversified down in these dark expanses of the ocean, where there are no physical barriers to prevent cross-breeding. He believes that unique light displays helped pair mates and keep species from converging over time. "If we can image or video unique flashing patterns for the different species, then we know that they're using this light to communicate with each other," Sparks told reporters at the AMNH event.

To find out, Lombardi will use the Exosuit equipped with a suction tool to capture interesting specimens. The fish will then be stuck in a "cartridge" and placed in front of an extremely sensitive camera attached to a remotely operated vehicle, called the DeepReef-ROV, that will accompany Lombardi on the mission. A fiber-optic tether will share data with scientists on the surface, and they’ll be able to prod the fish and examine its flashing behavior by shining their own lights on the specimen. 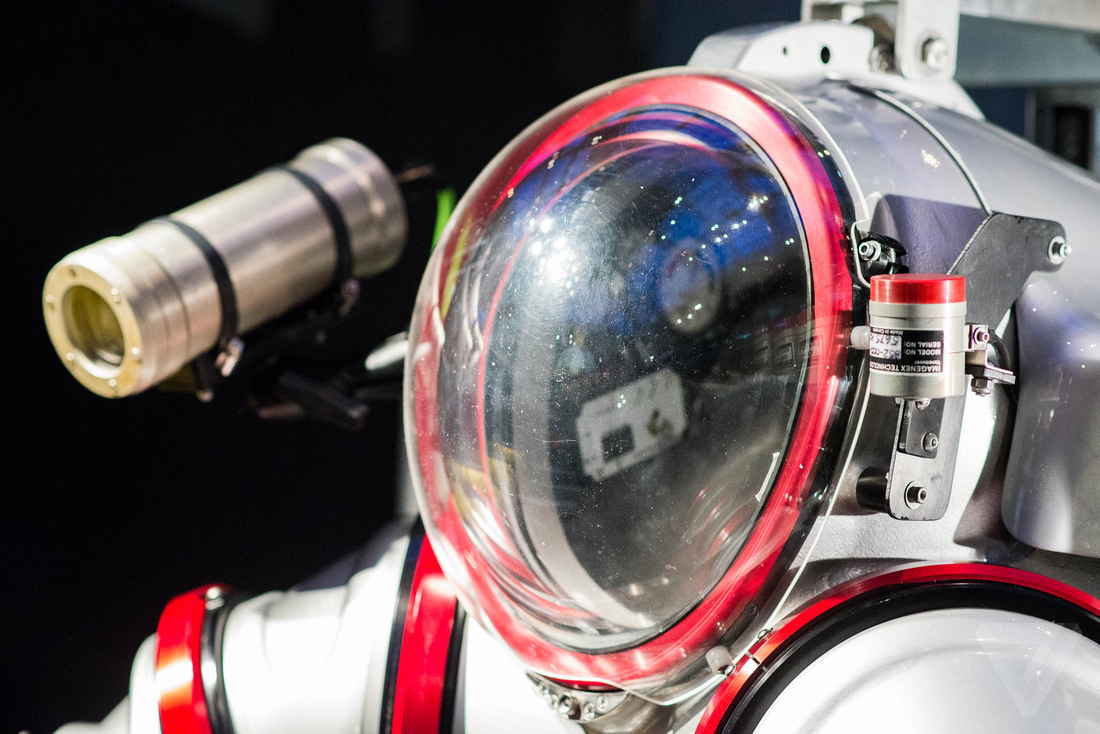 But that’s only the start: researchers also hope the fish can help understand the human brain. A group, led by neurobiologist Vincent Pieribone of Yale University, is working on harvesting the bioluminescent proteins in these fish to help see how their brains work. In the lab, they combine and mutate engineered proteins with DNA so that the proteins will respond to electric activity in the cell. With these modifications, they can "in essence read out the electrical activity of a structure, a brain, or an organism," Pieribone says. "By just shining the correct light on it you can see the cells fire." With his probes, scientists can actually see brain activity thanks to flashes from these bioluminescent proteins. In the future, Pieribone plans to use this knowledge to help patients with brain injuries interact with machines and robotic tools, allowing them to be more independent.

To get there, he needs the right proteins first, and since scientists are unable to recreate them in the lab, Pieribone is going straight to the source. "We have just exhausted the capability of doing it engineering-wise, but you go into the ocean and it's already been done. It's billions of years of evolution."

As for the dive itself, Lombardi says he expects to be at depth for three to five hours at a time, compared to just minutes for some of the wet dives he’s performed in the past to snatch biofluorescent fish. "On one dive, I spent seven minutes at depth and came back with a new species, and so now I can spend five hours at depth... It changes the game."