This just in: Paper is the best Facebook app ever

Mark Zuckerberg has finally done it.

After a long succession of mobile mishaps, he has delivered the portable Facebook app I've always wanted… and there's hardly any evidence that Paper is a Facebook product. Upon opening the app for the first time you're greeted with a shimmering Paper logo set in Helvetica Neue UltraLight, the opposite of the bold, white logo Facebook has used since 2005. It’s a fresh start, and it could be just what the company needed.

As Facebook reaches 1.25 billion active users and celebrates its 10th anniversary, the company faces increased skepticism from both pundits and consumers. The company is no longer new or cool, they say. Facebook might be too big to fail, but that might also mean it’s too big to make aggressive changes to its service. The company's informal motto, "Move fast and break things," doesn't seem to hold the same gravitas it once held.

So for its next app, Facebook started from scratch and started small. “Great products don’t start with a billion users, they start with just a few,” says Michael Reckhow, product manager on Paper. And it came up with something decidedly unlike anything Facebook’s done before. 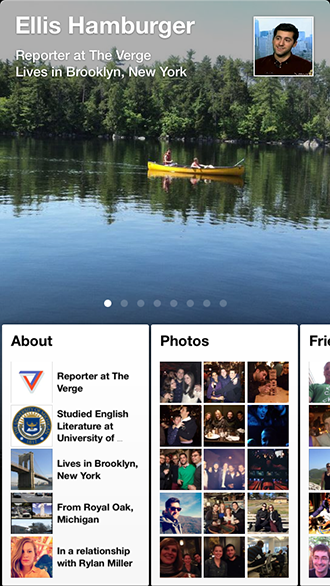 Paper is the first product born of Creative Labs, a new space within Facebook for small teams to develop ideas and apps and see if they stick. To build the app, Zuckerberg enlisted Mike Matas, who designed software for the original iPhone, Nest's trademark thermostat interface, and Al Gore's pioneering interactive eBook Our Choice. His work has cemented touch-based interfaces in the modern vernacular — especially as they pertain to manipulating text and photos on a screen with your fingers.

When Facebook acquired Matas’ digital publishing company Push Pop Press in 2011, it asked him to apply his skills to Facebook content. Paper was initially conceived to make Facebook look better, more like the interactive, always-relevant "personal newspaper" Zuckerberg hoped Facebook would be. Paper turned out a little bit differently: the app abandons Facebook’s singular News Feed in favor of several — each containing a different kind of news. One is your regular old Facebook feed, and you choose the others among 20 categories like Headlines, Planet, Cute, Tech, Pop Life, and Score. Each section includes a stream of stories laid out horizontally inside cards — you swipe left and right to scroll, not up and down as Facebook has trained us all to do.

There's room for more than one News Feed

Paper’s Facebook feed is just a better-looking, more responsive version of what you’ll find inside the company’s main app. Every other section is a mix of recent and popular posts from the profile pages of Facebook's favorite publishers, curated by a small (and powerful) editorial team within the company. In Headlines, for example, you'll find posts from Time, the AP, The New York Times, Politico, and NPR. In Cute, you'll find a range of more curated posts from the likes of Grumpy Cat, Laughing Squid, and Zooey Deschanel's site HelloGiggles.

Facebook doesn’t seem to be actively choosing specific stories as much as it is organizing stories with high engagement from its favorite publishers — but that’s okay. Most of the time, I’m just looking for something to read. Still, I did find myself flipping through story after story from the same publications over and over: TIME, CNN, and The New York Times seem to have received favorable placement in the odds pool. The company emphasizes, however, that it will pull stories from all over the Facebook network, and not just from the 40 publishers it chose to create cards for on launch day. Facebook recently made moves to highlight popular posts inside a new "Trending" section, but never before has the company elevated external content to quite so high a pedestal. With a quick tap and drag, you can arrange it so that Headlines shows up first, and you can push your Facebook feed all the way to the back of your news stack. 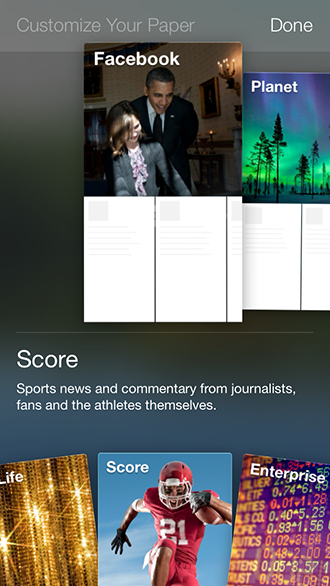 The ability to effectively demote your friends below Facebook’s editorially curated content heralds a sea change for the company. Facebook’s stellar new Messenger app contains hardly any Facebook branding, but Paper allows you to experience a world built by Facebook engineers that doesn’t have Facebook’s core product in it. Facebook seems to have shrugged off its dot-com-era identity, where every product it launches has to be focused on increasing Facebook activity amongst your friends. Perhaps Facebook realized that it’s bigger than your group of friends, and that supplying valuable content and curation is another avenue that both businesses and users could love. With Paper the company has aimed narrowly at utility — even if that doesn’t include your Facebook friends.

Most story cards you’ll find therein have been created by Facebook with custom fonts, colors, and designs to better match 40-some publications the company hand-picked for launch day. National Geographic cards, for example, feature bright yellow borders to match the magazine's design. Paper lets publishers’ content live and breathe, in its ordinary attire, on another website. Each card has a consistent look: a profile photo up top, followed by text, and then a card representing any linked article. Facebook’s goal, as Matas tells it, is to "put content first," a philosophy that has consumed Valley tech culture — like Medium, Paper makes liberal use of white space to draw your eye towards photos or text, and like Flipboard, images are often full-bleed, taking over your entire screen. If you swipe up on a card, a web view of the linked article folds open, Flipboard-style.

When you're finished reading, you can pull down on an article to close it like an envelope. You can like stories, comment on them, share them, and even save them to read later using Pocket, Instapaper, Safari's Reading List, and Pinboard — more proof that Facebook takes Paper seriously as a news-reading app. With the addition of news sections and the absence of ads, Paper becomes even more appealing. (Facebook, of course, won't deny that Paper may someday have ads, but for now I'm thankful.) Apps like Circa and Flipboard are better than Paper at curating top news, since that’s their expertise, but I came away impressed by Paper’s editorial selections, and the hand crafted story cards designed for each publication. 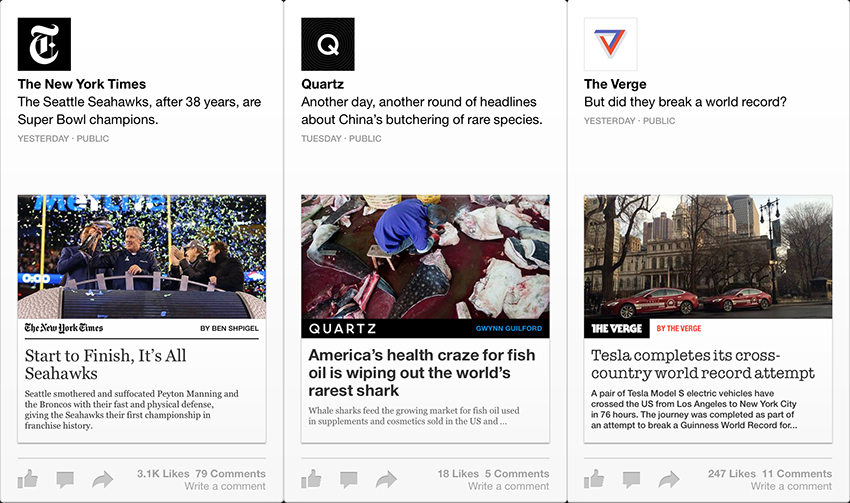 Everything from swipes to pinch-and-zooms respond instantaneously and naturally, and images load quickly. For help with Paper's myriad animations and transitions, Matas called upon Loren Brichter, a former colleague at Apple who is best-known for his work on Tweetie and Letterpress. Ironically, Paper has all but ignored pull-to-refresh, a gesture Brichter invented, but in its place the duo have created a host of new gestures and ideas that will very likely inspire the next generation of interactive apps.

Paper actually includes no refresh button, which could confuse some users, but is for the better. New content cards fly in the moment they’re posted, as if they’re being dealt at a casino. Posts unfold like a broadsheet newspaper when you tap them. As you rearrange news sections, each section card shivers like a leaf floating atop your screen. If you tap Reshare on a post, it shrinks into a small box and the words "Ellis Hamburger shared this" appear letter by letter as if it they being typed on a typewriter. The card then flies off the screen like a message sent in Apple’s Mail app for iPad. Paper even killed off the back button, and has replaced it with a simple down-swipe to return to the previous page.

These interactions, while sometimes a tad too whimsical, make Facebook’s main app feel ancient in comparison. And with the ability to view Timelines, Groups, and Events, as well as your friend requests, messages, and notifications — in far more elegant fashion than the company’s main app — it can effectively replace the standard app. In my week of testing, I found no reason to return to the Facebook app. 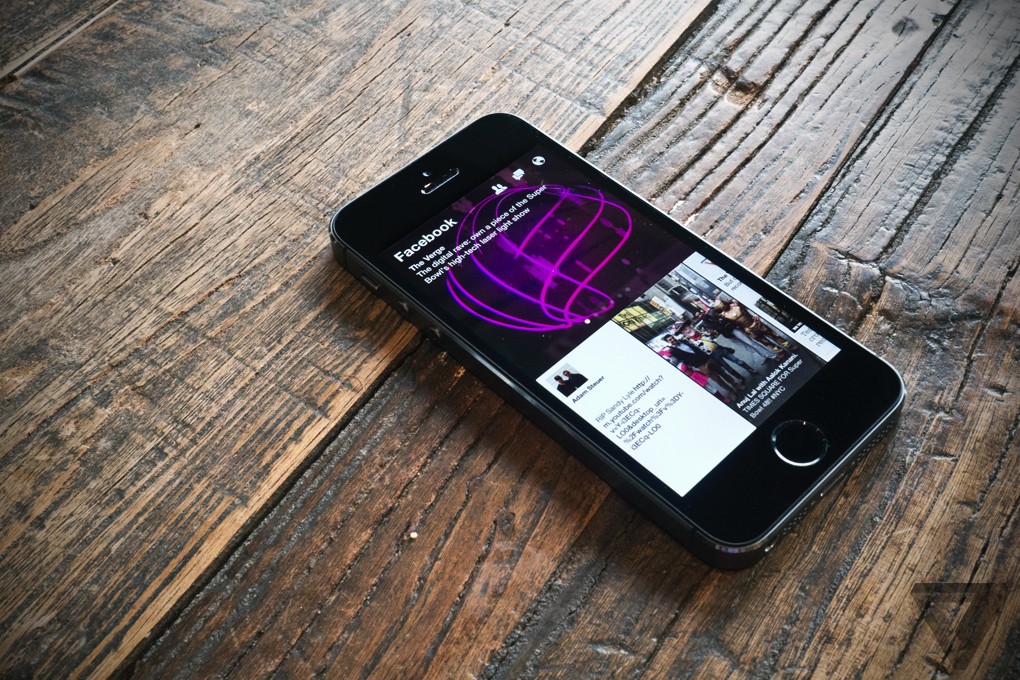 After using Paper for several hours, I waved a fond goodbye to the blue F that has adorned my phone's home screen for the last several years. I replaced it with Paper, a more useful app, and the best version of Facebook yet.

The more I think about it, though, the more I think that “a better Facebook” might not be what Facebook users are looking for. Consumers are asking for a fun, addictive new way to interact with friends — as indicated by the rise of apps like Snapchat and Secret, and games like QuizUp. Investors are asking for Facebook’s answer to teens allegedly fleeing the service. Pundits, of course, just want to know how Facebook will survive when its features are being unbundled by smaller, more agile startups at every turn.

Creative Labs is ostensibly the answer to these questions, giving Facebook the ability to make small, experimental moves too risky to thrust upon 1.25 billion people simultaneously. Some say Facebook may have an “irreversibly bad brand,” and no amount of wonderful gestures and interfaces can fix that. Fortunately, Paper is more than just a new interface — it’s a potent response to the dozens of news apps taking hold in the App Store.

Maybe Creative Labs’ next app will answer our questions about where Facebook fits in in a growing world of ephemeral apps and experiences.