Can the human brain design a perfect object?

Share All sharing options for: Can the human brain design a perfect object?

Merel Bekking wants to create the perfect design. But instead of looking to ratios and formulas, she's peering into the human mind to find it. "I want to investigate if it is possible to make a perfect design based on brain activity," Bekking says in a video describing her work. She's already begun with a small group of 10 men and 10 women, using an MRI machine to determine what design elements they prefer the most.

"The three most important [decisions] are shape, color, and material."

"As a designer, you have to make a series of decisions," Bekking says. "And the three most important ones are shape, color, and material." By presenting an array of those three elements to her subjects during a scan, Bekking found a preference for the color red, the material plastic, and for shapes that were closed and appeared organic. Bekking hasn't yet created the perfect red, plastic, closed-organic shape, but she plans to present a series of "perfect everyday objects" at Milan Design Week in early April.

Though red and plastic may be what most stimulated subjects' minds, it isn't what the group believed it most preferred. "It is surprising to see that the individuals gave different answers on paper than what the scans showed," Bekking says in a statement. "They said they liked the material wood, the color blue, and open, round shapes." With her small group of subjects and simple methodology, Bekking's findings likely won't lead to the perfect design — but they'll certainly give an interesting insight into her subjects' minds. 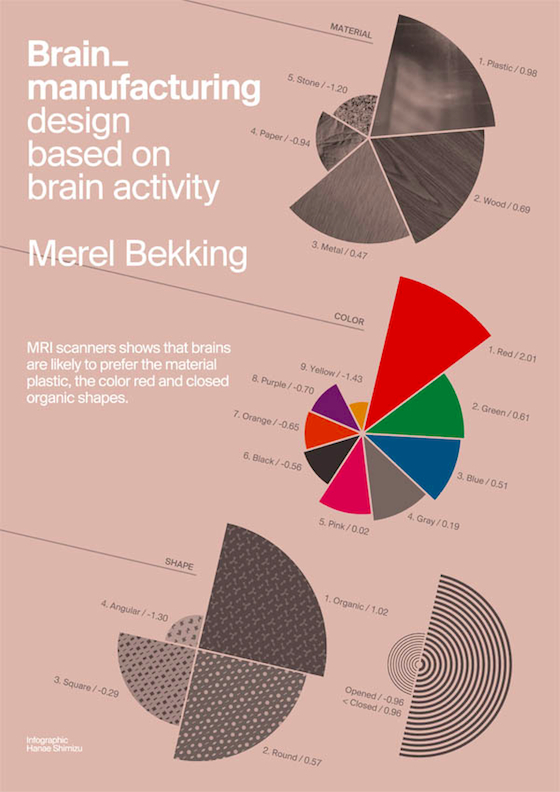