Twitter has posted new job listings for roles related to commerce, in a move that signals its long-simmering retail ambitions are gaining momentum. As first reported by TechCrunch, Twitter has advertised for a senior manager for commerce partnerships and a product marketing manager for the commerce team. Both will work with Nathan Hubbard, the former Ticketmaster president whom Twitter brought on last summer in an effort to let merchants sell products inside of tweets. Turning Twitter into a marketplace would provide the company with a new revenue stream, in the form of commissions on sales, and a better understanding of its users, which would benefit its advertisers.

On Friday, Re/code posted a storyboard of a potential user interface for Twitter commerce created by e-commerce site The Fancy. The storyboard, which was posted to a public page on The Fancy's website, shows a mock-up of an iPhone screen with a Twitter card that expands to include a button that says "Buy with Fancy." After tapping it, the user would see a "sale screen" with more information about the product, followed by a checkout screen within the app. The Fancy is one of several companies Twitter has met with as it considers different approaches to bringing retail to the timeline, The Verge has learned. But the storyboard's design came from The Fancy, not Twitter itself. 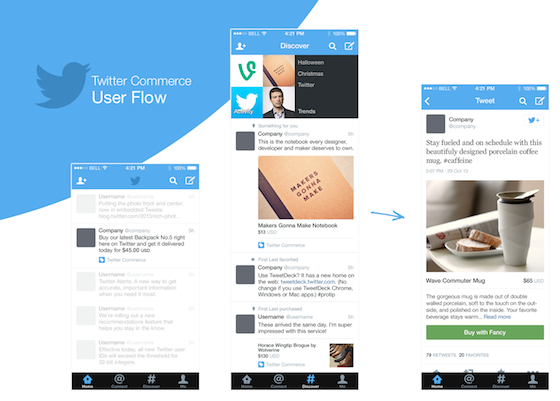 Still, the fact that Twitter is now building its team in the open suggest that its long-awaited take on e-commerce may be coming shortly. The company's recent embrace of the continuous redesign give it the flexibility to launch experiments easily, and the job listings say that managing beta tests will be part of the new hires' responsibilities. Twitter declined to comment on the recent commerce reports. But with the company set to report its earnings this week, and questions looming about how fast its user base is growing, the speculation about a big new revenue stream can only help it in the short term.