Share All sharing options for: New Android homescreen app says context is everything

Contextual apps and services are considered by many to be the next big frontier in mobile devices. Google has been pushing the benefits of contextual data with Google Now in Android and iOS, while Apple has integrated similar services to a limited extent in iOS 7. Startups such as Cover and recent Yahoo acquisition Aviate, provide wildly different smartphone experiences based on contextual data such as location or time of day.

EverythingMe, a homescreen and app launcher for Android available today, provides yet another take on using contextual data to make your smartphone even better. Co-founder Ami Ben David calls it "Smartphone 2.0" (as opposed to the static launchers in Android and iOS, i.e. smartphone 1.0) and promises that it will make your phone smarter and more efficient to use. 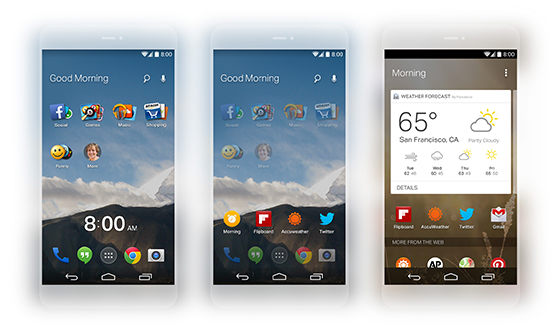 EverythingMe will feel familiar to most Android users

EverythingMe looks more like a traditional Android launcher than its main competitor Aviate, with five homescreens, an app drawer, and a search bar at the top. It's more familiar to someone that has used Android before, and doesn't require you to completely relearn where all of your apps are. It's more dynamic than traditional launchers, with its changing backgrounds and swift animations. It feels more alive as you use it.

The project initially started as a way to improve search on your phone, and EverythingMe claims its search bar now offers the fastest in-phone search available on Android. Finding apps or contacts only requires a tap or two in the search bar at the top of your screen, and the entire interface will rearrange itself as you type based on what you're looking for. More frequently used apps or contacts will bubble to the top of the results, while searches for specific artists or albums will be transferred to appropriate apps. A search for "movie" pulls up quick shortcuts to the YouTube, Netflix, and IMDB apps on my phone, as well as links to Fandango, Rotten Tomatoes, and other relevant web sites. The background changes to a relevant image from James Cameron's Avatar , which provides a more colorful and dynamic feel than the stark white backgrounds in Google's Search app.

EverythingMe also offers Smart Folders, folders that automatically populate with related apps. A Smart Folder of social apps will automatically contain your Facebook, Twitter, and Snapchat apps, for instance. If you download Instagram, it will automatically be added to the social folder when it is installed. The Smart Folders go beyond just what's on the phone by offering shortcuts to related websites below the installed apps, similar to the web shortcuts available when you use the search bar. Some Smart Folders, such as sports, news, or weather, attempt to anticipate what you are looking for with stylish Google Now-like cards that tell you current conditions or the latest headlines.

Smart Folders automatically get updated with each new app you install

The most contextual feature of EverythingMe is its Prediction Bar, a widget of sorts that sits at the bottom of your main homescreen and displays apps that it thinks you are most likely to use at a given time. The bar will change which apps are presented based on your location, time of day, and how often you use them. It includes an agenda-type app that changes during the day with current weather, upcoming appointments, and more. The widget will also show relevant apps if you plug a headset into the phone, or if you have a missed call from one of your favorite contacts. David says that it takes a few days of using EverythingMe before the Prediction Bar becomes its most effective as the launcher changes its suggestions based on your habits.

EverythingMe's goal is to anticipate what you want to do with your phone in any given situation and then make it easy to accomplish that task. David likens it to a real life human assistant that has your coffee just the way you like it on your desk before you even step into the office. I've been using the latest version of the launcher on my Moto X for a couple of days and while it's definitely not as capable as a real human assistant (it has yet to get me a cup of coffee), it has surprised me on a number of occasions by presenting the app or information I'm looking for with little to no input from me. It's also fast and responsive and the extra information it pulls in for the Smart Folders and other functions don't seem to slow it down.

EverythingMe's biggest challenge will be getting users to install it

The biggest challenge for EverythingMe will not be figuring out what app I want to use next but to actually get people to download and install the launcher. The company claims that it saw over two million downloads during its eight month public beta test, which while impressive, is only but a small fraction of the Android userbase. The truth of the matter is that most users are content with they way their phones come out of the box or aren't even aware that they can install a different app launcher.

For now, the company is independent (though it has raised considerable funds, employs over 60 engineers, and has caught the eye of Samsung) and it is offering the app at no cost, hoping that it will continue to grow via word of mouth. EverythingMe makes money by promoting and suggesting apps to users based on their search criteria and it has a partnership with Mozilla to power the search features in Firefox OS. David insists that no promoted app will rank higher than an actual app installed on a user's phone, and I didn't find the suggestions to be obnoxious or obtrusive in the time I've used the app.

EverythingMe is hoping that context will be everything to everyone, and there's a very good chance that the smartphones of tomorrow will be using contextual data in ways that we can only imagine. Until then, EverythingMe is one way to take advantage of all of that data that your smartphone already knows.