Freezing Sochi: how Russia turned a subtropical beach into a Winter Olympics wonderland

Freezing Sochi: how Russia turned a subtropical beach into a Winter Olympics wonderland

The Olympic Village in Sochi, Russia, on the shores of the Black Sea. ( Wikipedia)

Sochi is not the most obvious place to host the Winter Olympics.

The Russian resort, on the eastern shore of the Black Sea, is humid and subtropical. Temperatures average out at about 52 degrees Fahrenheit in the winter, and 75 degrees in the summer. Palm trees line the streets, and it's the only part of Russia warm enough to grow tea leaves. In other words, it's a lovely spot if you're planning a beach holiday — Stalin had his favorite summer house there — but it wouldn't be most people's first choice for a ski trip.

"There is almost no snow here — at the moment it's raining," says Olga Mironova, a local resident. That's exactly the problem that derailed the last Winter Olympics in Vancouver in 2010 — buckets of snow had to be airlifted to top up the slushy covering on the hay bales that were being used to create artificial mounds in the tracks. Those emergency measures proved successful, but organizers admitted afterwards that they'd seriously underestimated the impact of climate change.

Sochi was awarded the XXII Olympic Winter Games and Paralympic Winter Games in 2007 following an unsuccessful bid for the 2002 event. Russia beat rival bids from Salzburg in Austria and Pyeongchang in South Korea thanks mainly to its existing tourist infrastructure and strong public and political support for the bid. Russian president Vladimir Putin even flew to the elections in Guatemala City to deliver a speech in support of Sochi, telling the jury: "We have never won the honor to celebrate the Winter Olympic Games. You know we can turn sports competitions into a really spectacular show and we are good at it."

The key to convincing the jury was the nearby Krasnaya Polyana mountains, an hour's drive from Sochi itself. Here, nestled among the peaks of the Western Caucasus under the Aigba Ridge, an Olympic village has since been built in the new resort of Rosa Khutor, which hosted the Alpine Ski World Cup races in 2012.

However, the resort of Rosa Khutor is only three years old itself. Until two decades ago it had no road or telephone access, and when Russia won the bid in 2007 it was best known for its tulip fields and the generous productivity of its honeybees. The resort was almost unknown in the US for skiing, though French heli-skiers had been exploring its terrain for some years.

So it shouldn't come as much surprise that transforming Rosa Khutor into an Olympic venue has been a rapid, expensive process. It's estimated that the cost of staging the Olympics in Sochi has been greater than the previous three Winter Games combined — ballooning to a whopping $51 billion. A sizable chunk of that money has gone to dealing with the "whims of the weather," as a spokesperson for Sochi 2014 put it in an email to The Verge.

Due to the region's rural heritage, there's no history of meteorological data to analyze — weather stations were only installed in 2010. Locals also say that temperatures tend to be wildly unpredictable — it's not uncommon for 3 feet of snow to fall overnight, but in February, 2013 several World Cup events were canceled due to lack of snow. 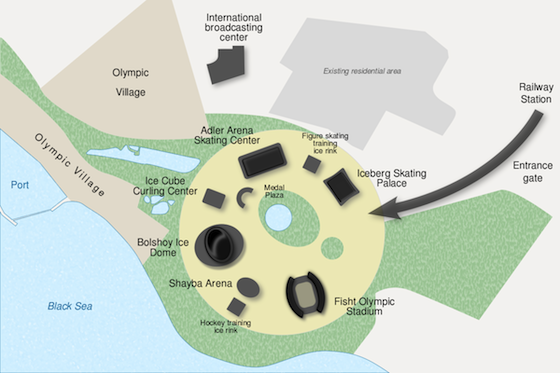 But the Olympics can't be canceled, and with the eyes of the world on Russia, it's imperative that the former superpower gets this right. As such, Sochi 2014's management team has put together a comprehensive plan to make absolutely sure that the Winter Games won't be a washout. "Taken together, these measures will mean that snow is guaranteed, whatever the weather," the Sochi spokesperson said.

Though Sochi's management team refused to disclose the technical details of the program, they did detail an extensive system of safeguards that should mean there'll be sufficient snow in Sochi for the games. These include the implementation of one of the largest snowmaking systems in Europe, comprising of two huge water reservoirs that feed 400 snow cannons installed along the slopes.

"These measures will mean that snow is guaranteed."

If that snow isn't enough, then the authorities will fall back on 710,000 cubic meters of snow collected during the winters of previous years leading up to the games. To keep it from melting in the region's hot summers, the 10 separate stockpiles have been kept packed tight under insulating covers high up in the mountains, safe from the sun's rays. If the snow cannons aren't sufficient to keep the tracks open, then a stockpile will be unsealed and the resulting mini-avalanche will be guided down the mountain, using half-pipes, to where it's needed.

Speaking of avalanches, careful preparation has also gone into making sure that a natural disaster doesn't overwhelm the young resort as the rapid pace of construction means that its landscapes have seen dramatic change in a very short space of time. Risk mapping, structural protection and explosive avalanche control techniques that trigger small, harmless flows before enough snow can collect for a huge, devastating event, are all being employed in the complex terrain that surrounds Rosa Khutor.

When the Olympics are over, this snowmaking and safety infrastructure won't be dismantled. Instead, it'll be used to extend Rosa Khutor's ski season to between 140 and 180 days a year — far longer than many resorts are able to open for.

Down in Sochi itself, on the coast of the Black Sea, the other half of the games will be held. Here, the weather is less of a factor — five indoor arenas will host figure skating, speed skating, hockey, and curling, and an additional outdoor area will host the opening and closing ceremonies. The Olympic Park in Sochi will also play double-duty: it's been carefully designed so that it can also act as a home for the Formula 1's first Russian Grand Prix in October, 2014.

In each of these indoor arenas, underfloor cooling systems are installed so that the ice stays frozen above it. Like in other ice rinks around the world, this will be accomplished using a substance called propylene glycol, which doesn't freeze until temperatures reach 8.6 F. The chemical is cooled in a refrigeration system and then pumped through pipes in aluminum panels that sit directly below the ice. The panels are chilled by the coolant, and the ice stays frozen. 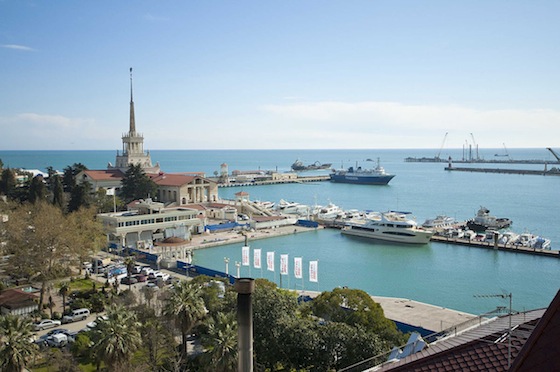 While Sochi is expending a tremendous amount of effort and money on ensuring the XXII Olympic Winter Games goes smoothly, the scale of the undertaking may be dwarfed by that required to keep the Winter Olympics going in the coming decades.

Climatologists predict that even under a best-case scenario, almost half the venues that have hosted the Winter Olympics over the last century would be unable to do so by 2080 without resorting to extensive and expensive artificial snowmaking techniques. In a business-as-usual scenario, which climatologists warn that we're facing unless global legislation is swiftly enacted, the same outcome would be expected in just 40 years.

The mechanics of climate change mean that polar regions are warming much faster than those at the equator. The February daytime temperature of Winter Games locations averaged out at 32.7 F between the 1920-'50s, but have soared to 46.0 F at Olympics held this millennium. "Despite technological advances, there are limits to what current weather risk management strategies can cope with," said Daniel Scott from the University of Waterloo, who led the research. "By the middle of this century, these limits will be surpassed in some former Winter Olympic host regions."

"It will be more problematic than ever to find suitable and snow-safe places."

Hans Linderholm, a climatologist at the University of Gothenburg, told The Verge: "It will be more problematic than ever to find suitable and snow-safe places. It's likely the use of indoor arenas will become more common in the future. Then the Winter Games can be held almost anywhere — even Qatar!"

With mere days left before the Games begin in Sochi, the last pieces of the puzzle are being put into place. Plenty of factors could derail the Winter Olympics — Circassian terrorists, protests over Russia's anti-gay laws, the absence of high-profile western leaders, corruption allegations, dodgy accommodations, and catastrophic damage to the region's delicate ecosystems are only a few examples.

But a lack of snow shouldn't be one of them.