Welcome to the age of 'mobile first, cloud first'

Microsoft named its third CEO in its entire 38-year history today: Satya Nadella. After Bill Gates and Steve Ballmer, Nadella faces the challenge of running a company that has 16 different billion-dollar businesses and will soon have 130,000 employees thanks to its acquisition of Nokia. That’s not just a huge challenge, it’s also a question of focus and strategy for Nadella. But he won’t be alone: Microsoft co-founder and former chairman Bill Gates has "stepped up" to work with Nadella as a "technology advisor," a role where he’ll be working with Microsoft’s various business groups on future products. It’s a surprise move that sees Gates relinquish his role as chairman of the board, but it also means the father of Microsoft will be spending a lot more time at the company. It’s a historic day for the software giant and its empire of employees, but what does a Nadella–Gates combo mean for Microsoft?

While Nadella has been working at Microsoft for 22 years, he has spent the majority of his time building products that don’t often make the headlines. This might not make him an obvious choice to outsiders, but insiders have seen him transform Microsoft’s server business to focus on the cloud in areas that are increasingly important for businesses and the enterprise. In an unusual internal CEO "interview," Nadella provided some early hints at his own strategy for Microsoft going forward: mobile and cloud first. "Everything is becoming digital and software driven," says Nadella.

If that strategy sounds different from Ballmer’s vision of Microsoft as a "devices and services" company, it’s because it clearly is. Nadella has repeated "mobile first, cloud first" over and over again today in a carefully delivered message to show his intentions as CEO. It might not mean that Xbox and Surface will be abandoned in future, but it’s very clear that Nadella sees cloud and mobile opportunities as his main priority.

To highlight that further, Nadella’s first memo to Microsoft employees doesn’t mention Windows or Office — it’s about focus. "I would say the first thing I want to do and focus on is ruthlessly remove any obstacles that allow us to innovate," says Nadella in his interview video. "And then focus all that innovation on things that Microsoft can uniquely do." 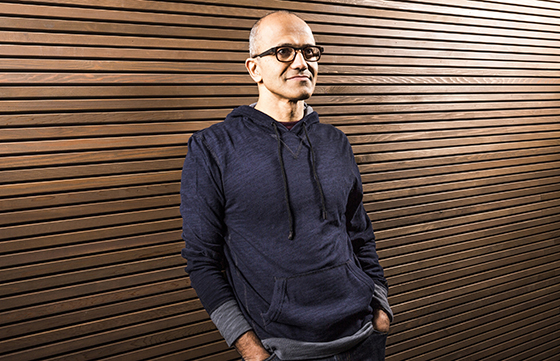 That ruthlessness to push Microsoft forward could work well alongside Bill Gates in his apparent role as Nadella’s wingman. However, it’s unclear just how involved Gates will be on new products as a technology advisor. Before Gates left his day-to-day work at Microsoft in 2008, his internal reviews of products were notorious. An attention to detail and ability to demand more of his employees left some products dead before they reached the market. Gates famously halted the Courier tablet project over concerns it wouldn’t be viable without an email client.

Gates has been focused on his work at his charitable foundation, and his "return" to Microsoft for a third of his time is very different from when he spent the majority of his days at the company’s Redmond headquarters. In his role as chairman, Gates has been active in board decisions — but it’s unlikely that he has been deeply involved in product planning. Gates admits that Nadella has asked him to "step up," and it’s clear he backs the new CEO (publicly, at least). Microsoft needs a gatekeeper that says "no" to products that aren’t ready, but Gates might not be the perfect candidate after six years of focus on work outside of Microsoft.

The biggest challenge Microsoft continues to face is the rapid shift from traditional PC-based computing towards smartphones, tablets, and even apps on the web. While the effect on enterprise computing is still in its early stages, consumers have flocked to smartphones and devices that run software from rivals like Google and Apple. Microsoft is extremely dominant in the enterprise, and most businesses make use of Windows and Office on a daily basis worldwide. But there will come a time when all enterprise services and applications are fully accessible over the web, and Microsoft can’t afford to miss twice. With Nadella’s focus on the cloud, he clearly wants Microsoft to be ready for the inevitable attack on its still-growing enterprise software.

One of his first hurdles as CEO is to ensure Microsoft continues its focus on Windows Phone while deciding whether to make its future software and services available across rival platforms like Android and iOS. The upcoming closure of Microsoft’s deal to acquire Nokia’s phone business will bring a lot of added complexity, but it’s also an essential element to Windows Phone’s health. Nokia dominates Windows Phone shipments, and while Microsoft needs to be aggressive in mobile — especially on updating its own operating system rapidly — it will have to manage the Nokia transition very carefully. 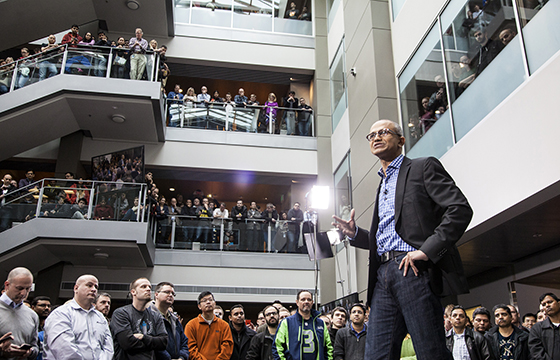 Get serious with Windows Phone or spike it

What will really define Nadella’s role as Microsoft's CEO will be any "ruthless" choices he makes on the platform side. Windows might still dominate on the enterprise and PC side, but its role in mobile has been less successful. Providing Gates doesn’t block such a move, it’s not impossible to imagine a world where Microsoft looks at adopting Android in some form, whether it’s enabling popular Android apps to run across its own tablets and phones, placing its own software on Android in a big way, or creating its own "fork" of Android like Amazon does. It’s very clear that Android is becoming the mobile equivalent of Windows right now, and Nadella appears to understand the challenges and realities that Microsoft faces. It’s either invest heavily in Windows Phone, or spike it to get traction elsewhere on mobile.

Nadella faces more tough choices with Office, where new platforms present new challenges. Microsoft’s Office team has been slow to react to a world moving to touchscreens, and the company’s software still runs in the traditional desktop mode on the millions of Windows tablets out there today. Touch-optimized versions are coming to Windows soon, but it’s still unclear if Microsoft is planning a true Office for iPad app. Versions for Android and iOS exist right now, but they’re extremely basic and limited compared to the desktop offering. Getting the Office team focused on mobile and the cloud will have to be a key focus for both Gates and Nadella in guiding the direction of its productivity suite. Rivals might not have cracked the perfect Office equivalent for mobile yet, but that’s a clear opportunity for Microsoft to take advantage of.

And then there’s Skype and Xbox. Microsoft has positioned its gaming console as a gateway into the living room, something Gates was always keen to crack. If Nadella is serious about Xbox and the cloud, then he’ll need to move quickly with the company’s cloud streaming concept. Sony is already beta testing its own service, and Microsoft won’t want to miss an opportunity to make a name for itself as a cloud provider in the games and entertainment industries. While Skype now runs on the Xbox One, Microsoft hasn’t pushed any major innovations or changes to the service yet. It acquired the service back in 2011, but it now faces threats from rival services like WhatsApp, Google Hangouts, and Facebook Messenger. Skype may have focused on mobile recently, but a lack of a full web version seems like an obvious oversight. In a mobile- and cloud-first company, Skype is surely an essential element.

Nadella's "cloud first, mobile first" strategy might not seem vastly different from Ballmer's "devices and services" strategy at first blush, but it belies a deeper change in strategy. He has the opportunity to bring a fresh outlook on Microsoft's plans and — thanks to Gates — a chance to elevate Microsoft's product offerings. If Nadella and Gates can bring some of that software innovation to mobile, then Microsoft could be well positioned to continue building services and software that other companies use on their devices. Try as it might on hardware, Microsoft is still a software giant right now. And that, for Nadella, is certainly not a bad thing.

More from this stream Satya Nadella is Microsoft's new CEO: the full story