Xbox One gets battery life indicator with big February 11th update, more changes on the way

Share All sharing options for: Xbox One gets battery life indicator with big February 11th update, more changes on the way

With the Xbox One finally on the market, Microsoft has had a chance to hear feedback from actual buyers and customers. While the company has already addressed some minor TV and dashboard issues, it's beginning a new update process on February 11th by fixing a few of the console's most nagging issues. The new features are primarily focused on showing you what you've downloaded and installed: managing the storage space on your Xbox One is going to be easier than ever, and Microsoft is splitting My Games and My Apps into two separate lists to make managing a large library a lot easier.

It's also adding back an indicator for your controller's battery life, and the ability to use a USB keyboard with the console. That's all in addition to what Microsoft calls "lots of behind-the-scenes updates" for developers and gamers alike — it's the company's first big chance to address feedback it's received from millions of Xbox One owners, and it affects everything from Kinect to overall stability.

Microsoft is already working on the next update, too, which as the rumors suggested, is due March 4th. That release is centered around the arrival of Titanfall, and will be dedicated to the Xbox Live party and multiplayer functions of the Xbox One — two features that have encountered some harsh feedback from dedicated gamers. Microsoft says both updates are just the beginning for what it plans to do with the platform; the company has always talked about how the Xbox One is built for the future, and it appears that it's committed to building toward that future. 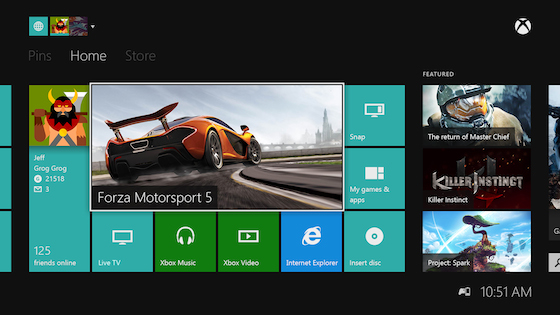