Behind schedule: why is NBC tape-delaying the Olympics again?

Behind schedule: why is NBC tape-delaying the Olympics again?

Starting tomorrow, millions of Americans will begin crowding around the television each night to watch the Winter Olympics in Sochi, Russia. But if they’re tuned in during prime time on NBC, very little of what they see will be happening live. Sochi is nine hours ahead of Eastern standard time, so as it has done in the past, NBC is relying on the tape delay to piece together each day’s highlights into a package for its evening audience. Select events will air live across NBC’s other networks, but the internet remains your only real choice for comprehensive live coverage — and NBC is perfectly happy with that.

"The time difference doesn’t allow for us to be live in prime time," said Mark Lazarus, NBC Sports Group's chairman, during a recent conference call discussing NBC’s plans. "We will package and curate it in a way that makes it a place that huge gatherings of family and friends want to gather and get together in front of their TV." Coverage kicks off February 6th — one day before Friday’s opening ceremony.

Expanding on NBC’s time-shifting strategy James Bell, the Olympics' executive producer, said, "I think you’re coming down to the stories of the athletes." Editing for prime time makes it easier for NBC to preproduce segments tailored for each event, planning them like a more traditional show rather than a live sporting event. No surprise, the network intends to focus on the lives of the athletes that have spent decades training in hopes of landing a gold medal and a place in history. "I’m hopeful that we’re able to connect our audience with more of those great stories because we know they’re out there," Bell said.

Will #NBCFail trend once again?

But taking time to frame those stories has earned NBC plenty of criticism. Some viewers may not care about seeing Olympic contests play out on live TV. For them, a summary of the day's highlights is a perfect fit. But the fans that want live coverage are often extremely vocal about it. NBC is by no means the first network to employ the tape delay, but it’s taken some of the harshest feedback for it. Resentment grew louder than ever in London, when #NBCFail became a trending Twitter topic throughout the games. Still, the network has grown used to this criticism over time; it’s covered the Olympics far more than the competition. Sochi marks NBC’s 14th time broadcasting the Olympics — a new record. And NBC is determined to maintain that connection with TV audiences. Ultimately it’s willing to accept the flack, since evidence shows the tape delay may not be hurting the network at all.

It certainly didn’t two years ago, when 219.4 million people tuned into the London Summer Olympics and earned NBC record viewership. But none of that stopped a chorus of complaints about tape delay. The element of surprise was dead and gone. Avoiding results each day in hopes of witnessing them for the first time at night was an impossible challenge, with constant spoilers on Facebook and Twitter only compounding frustration. Perhaps the worst example came when a promo for NBC’s own Today show spoiled Missy Franklin’s first gold-medal win — literally seconds before her race was set to air on TV.

Live coverage was expanding, though; NBC blanketed channels including USA, CNBC, and MSNBC with broadcasts throughout the day — but marquee events were still held for NBC prime time. Vivian Schiller, still NBC News’ chief digital officer at the time, called attention to the time-shifting backlash by retweeting (and then deleting the retweet) CNN’s Jonathan Wald, who said: "The medal for most Olympic whining goes to everyone complaining about what happens every four years, tape delay." Bell also joined in to defend the company’s decisions. 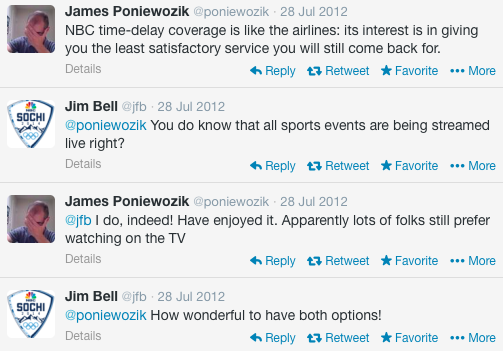 He made a fair argument: the internet offered NBC a way to satisfy diehards. During the London games, each and every Olympic contest could be streamed live on the web. An existing cable subscription was required for most live video, however, and authentication issues quickly led to another set of problems. The network plans to run that play once more in Sochi (and yes, you’ll need to have those cable credentials handy). It’s even blatantly ripped off the NFL’s Red Zone channel this time around. The Gold Zone — which will stream over NBCOlympics.com and the NBC Sports Live Extra app — will provide live look-ins at the most popular action every day from 7AM to 3PM ET. "It’s serving the fan that doesn’t necessarily know where to go," said Rick Cordella, senior VP of digital media at NBC Sports Group. "It’s saying, ‘This is important now, take a look at what’s happening.’"

The Olympics give NBC's Sports Network a push

Executives also hope the Olympics can help prop up the NBC Sports cable network. NBC will air every figure skating event on the network live as the action unfolds, another step to satisfy fans’ appetite for instant access. NBC doesn’t seem worried that all of this streaming and cable coverage will impact ratings for its flagship network. That’s not how things panned out last time, anyway. "What we found in London was that the people who were live-streaming Olympic content during the day on a PC or laptop or a tablet were actually more likely to watch more Olympic television than people who weren’t live-streaming or engaged in some other kind of contact with the Olympics," Bell said. More content than ever before was made available to fans, and NBC still pulled in record viewership during prime time. "Not only did it not cannibalize, it actually helped us grow our audience on television and this will be the first time we’re doing it at [the] Winter Games and we’re hopeful for a similar result."

NBC has other reasons to shoot for high ratings. Jimmy Fallon is preparing to assume the chair at The Tonight Show, and Bell didn’t hide his desire to help Fallon get off to a strong start. "We want to be able to, frankly, to be a big part of launching our new late night shows with Jimmy Fallon and Seth Myers," he said.

Cord cutters will be left out in the cold for these Winter games — just as they were in London. But everyone else will likely have some way to catch any event they’re interested in. It just may not always be from the comfort of their living-room couch.

Update: This article has been updated to include the author of the July 28th, 2012 tweet that criticized tape delay complaints. It was originally posted by CNN executive producer Jonathan Wald. Vivian Schiller retweeted his message and added a "+1" but later deleted her retweet.